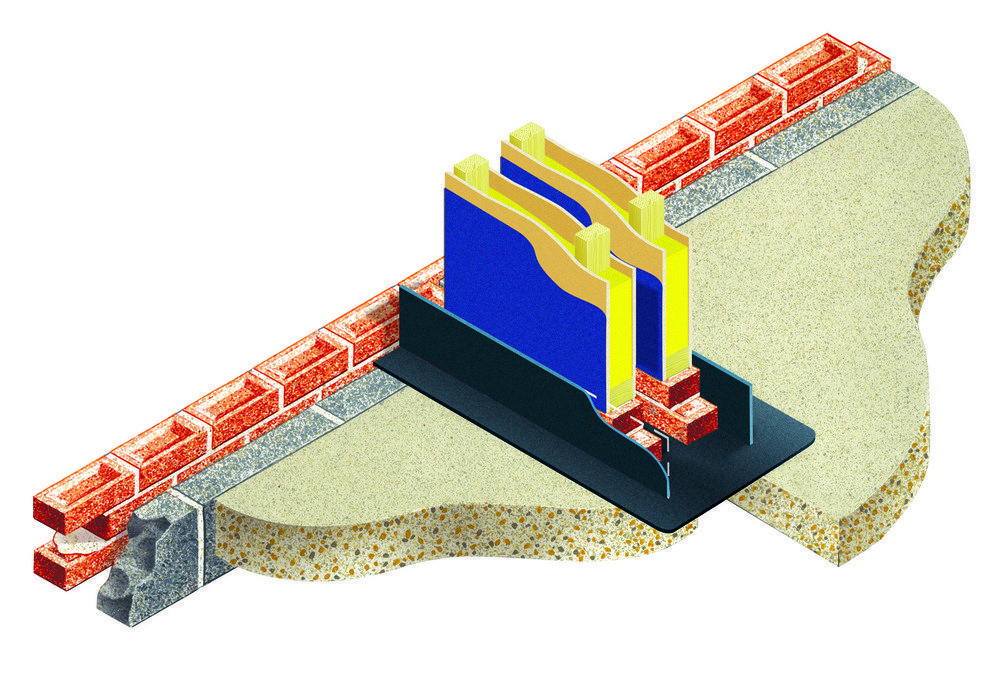 When site conditions dictate the use of raft construction, the builder faces a dilemma of how to bring together conflicting design aspects. In instances where there is a timber separating wall, (as depicted within the latest Robust Details E-WT-2 TM, Oct 2011 issue, detail 7) the illustrated arrangement incorporates measures to resist the passage of sound. One method is to form a channel cast/formed into the raft.  Its purpose is to act as an emergency canal. Should there be a water leak in the accommodation on one side of the wall, the channel can reduce the volume of water that might otherwise reach its neighbour.


Forming the channel is a cost consideration and to what extent it might cope with water volumes is questionable. There is also the matter of where the water goes. Whilst the channel should in theory permit discharge into the perimeter wall cavity, in reality if contaminated land barriers are present in the perimeter walls that exit path is blocked. If the presence of radon, methane or carbon dioxide dictate protective measures seal the cavity, the water exit route upon which the channel relies is obstructed.

There is also the question of damage. Arresting and channelling water in the middle of a wall means that water has to saturate whatever is in its path to get to that position. Timber frame/studwork is not designed to be partially submerged.

At Cavity Trays of Yeovil various party wall / separating wall barriers are available to provide mid-wall water arrestment. Because each barrier can rise substantially upwardly (rather than channel downwardly into the raft) it can withhold a greater extent of water. As well as eliminating the need to form a channel, each barrier by rising rather than descending can over-sail any contaminated land gas stop in the perimeter walls where it projects into the perimeter wall cavity. The upward-rising barrier introduces compatibility to what can otherwise be conflicting construction requirements.

Now a new style of Party Wall Rising Barrier designed by Cavity Trays Ltd has improved this approach further. The new barrier has two vertical upstands that rise against the plasterboard face on either side of the separating wall. In the event of flooding, the upstand acts as a dam, stopping the water from actually penetrating the wall. The use of a double upstand party wall rising barrier does not affect the behaviour of the acoustic measures.

The standard (5mm minimum) acoustic flanking strip can function against the barrier surface. Furthermore the use of conventional dpc under the timber frame sole plates can be eliminated, as the Party Wall Rising Barrier is manufactured from solid dpc and functions as such. Thus in one placement several functional requirements are established and the barrier is able to impede water to a greater extent than a mid wall raft channel.

The new Type PWRB from Cavity Trays Ltd provides an alternative approach to merging construction requirements and can do so in a way that is quick and cost-effective. In the event of internal ground floor flooding it can also minimise the extent of potential damage by arresting the water before it actually enters the wall.