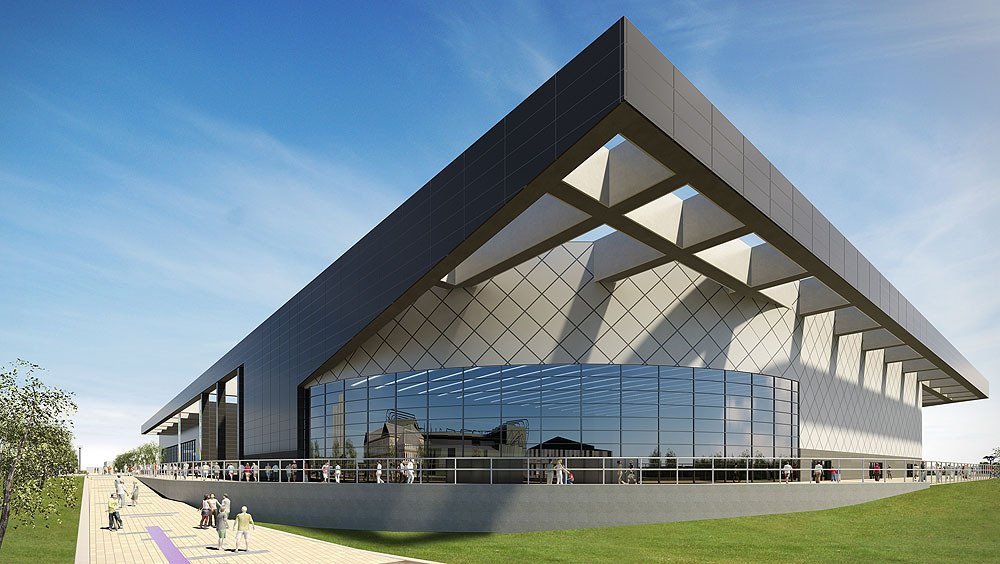 Changing from standard welding and flanging to the grooved system and prefabricating off site were key to the successful provision of HVAC services at Glasgow’s major new sports complex. 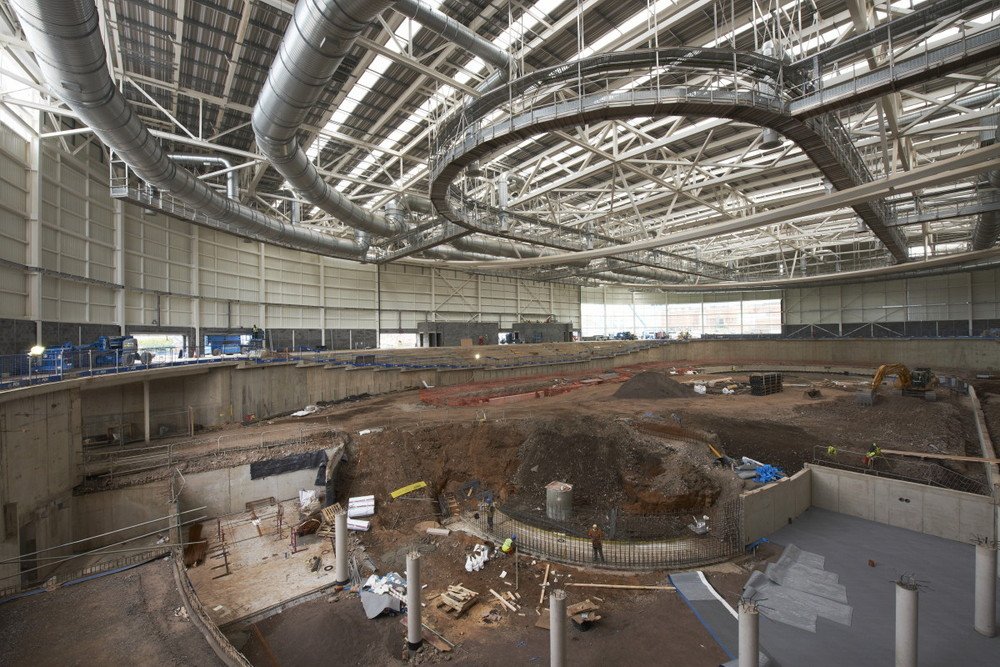 To meet the demanding construction schedule the contractor needed a reliable system that was quick and easy to install. The complexity of the project also made it essential to accommodate design changes quickly and easily.  Lack of space in the mechanical rooms – both for plant and for people to work – was a key constraint: the need to install large plant into confined spaces called for the elimination of cumbersome pipework and fittings, and for as much work as possible to be done off site.

The solution was to change from the original specification for standard welding and flanging to grooved technology and prefabricate in a bespoke off-site centre.  Engineering services were installed using a range of Victaulic rigid and flexible couplings, valves, strainers, mechanical tees and elbows on BS1387 steel pipe from 65mm – 500mm in diameter.

Up to 95% of the entire installation was prefabricated off site and delivered as and when needed on the jobsite.  This included pipe spools and pre-assembled modules for the boiler room and chiller room,all the risers and the main pipe runs from the risers to the floors.

Tightness of space in the energy centres was overcome by using grooved components to replace bulky welded/flanged items and cut down the amount of pipework required.  Pumps and chiller units were pre-assembled with valves and fittings in the prefabrication shop.  The use of butterfly valves saved weight, whilst the facility to close-couple valves reduced the number of pipe spools needed, and the potential for joint leaks.

To reduce noise and vibration, three flexible couplings were installed on either side of each pump and chiller in place of traditional rubber bellows.  Small and light but with high integral strength for maximum reliability, the couplings not only saved space but dramatically reduced installation time.   SPIE Mathew Hall Construction Manager, Gary Walker, explained: “Comparing welding and flanging with the grooved system is like comparing chalk and cheese.  When you’ve got 20 welds per pump and 20 flanges with multiple nuts and bolts compared with a Victaulic couplingwith just two nuts and bolts it’s a big difference.  A 100mm weld might take one and a half to two hours to complete but a Victaulic joint can be made in minutes.  And when you’ve got a 450mm pipe that might take five hours to weld you can cut, groove and fit a Victaulic joint in around two hours. I wouldn’t contemplate doing a job like this using anything other than Victaulic.” 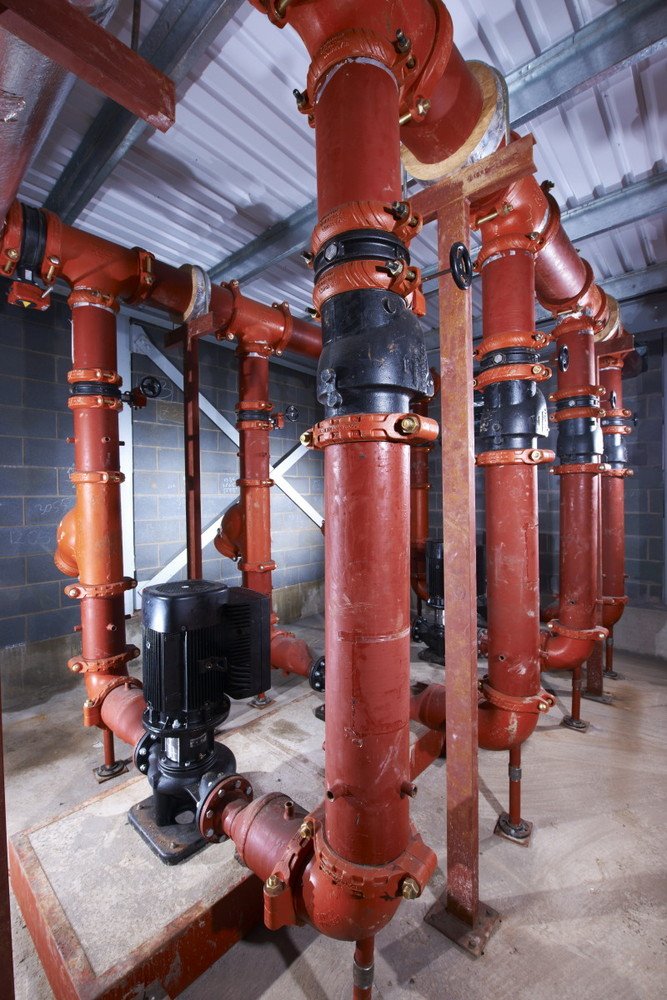 There was a substantial saving by not having to purchase rubber bellows. Avoiding complex bracketry which is needed to support pipework on top of bellows was an added factor in reducing cost, time and footprint.  “Rubber bellows are perishable and need replacing but the main advantage with grooved modules is that they’re easier to build off as you don’t need brackets to compensate for the movement  of the bellows,”Walker commented.

Where possible, the contractor used ‘installation-ready’ couplings which forms a strong, reliable joint without the need to disassemble and reassemble bolts, nuts, gasket and housings.  With no loose parts to drop or mislay, they made work on the jobsite quicker and more efficient.  “All the couplings were quick and easy to use but the installation-ready 177s were at least twice as quick to install so that sped up the programme even more,” said Walker.

The project successfully met a set of challenging criteria to achieve a fit-for-purpose solution on time and on budget.  “The installation was completed in around half the time it would have taken to weld and it was three times as quick to flush the non-welded system. We saved 25 – 30% on total installed costs compared with traditional methods,” said Senior Project Manager, Brian Fee. “Space was at a premium and we were able to use Victaulic products for everything, including work in confined spaces and tight angles where we couldn’t have welded.  The flexibility of the fittings made a big difference.”

A flagship project for SPIE Mathew Hall in the UK, the installation has not only convinced the team to tackle similar projects in the same way but has also attracted the attention of SPIE in France.  It is an excellent example of the benefits of taking a non-traditional approach: using grooved-end pipe-joining systems in preference to welding and flanging, combined with extensive prefabrication.  At a time when quality, cost and delivery are key criteria for construction projects, the project signals the way forward for greater efficiencies through this approach.

Around 2,500 pipe spools were prefabricated in six weeks on a 12-hour, seven-day shift system.  When harsh winter weather hampered work on site, production continued in the prefabrication centre to keep to the construction schedule and achieve on-time completion of the work.  “Unaffected by the weather or lack of light, we were able to compress schedules on site,” said SPIE Matthew Hall Prefabrication Manager, Mark Graham. “Typically on a project of this nature we would expect to realize labour efficiencies in the region of 40% against traditional methods.”

Manufacture in a controlled environment meant that all tasks were carried out at a safe working height. Delivery of prefabricated work where and when required reduced materials handling and the potential for accidents on site. This practice also improved on-site productivity and efficiency.  Because modules were pressure tested, dry fitted and checked off-site and transported to the job site ready for installation, time, space and special facilities required for other operations were eliminated so workers could readily complete the final assembly.  “No allowance is made for people to work in the mechanical room area when the drawings are made,” said Construction Manager, Gary Walker.  “If we had welded we would have had to have a separate shop next to the mechanical room and take all the necessary hot works precautions, which would have slowed us down.”

Keeping welding to a minimum kept costs down too.  “You can fix material costs but it’s difficult to get fixed labour costs,” Mark explained.  “Using Victaulic reduced the labour risk due to less labour being involved in the manufacture so we were able to give an accurate quote and deliver on budget and on time.  Consumables account for around 7-9% of the value of a welded installation but, by utilizing the Victaulic system, our consumables and energy usage dropped considerably.  We also avoided the costs of testing welds which can run into thousands of pounds and hold the job up if you have to send away one in ten welds to be tested.”