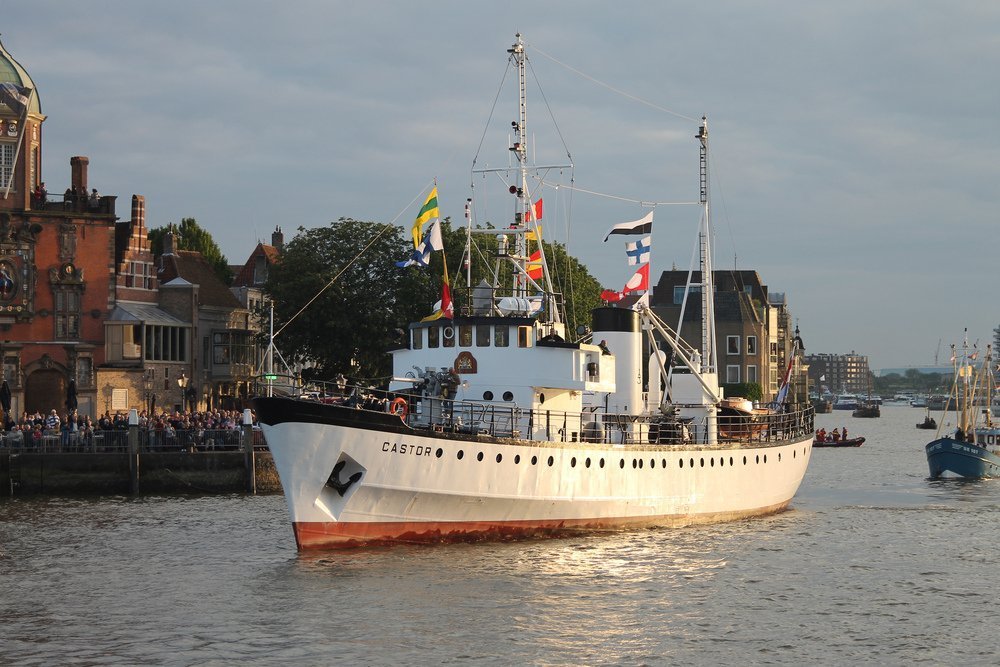 Having been moored in the fishing town of Urk for several years, The Castor’s glory days as one of the Dutch Navy’s premier vessels were a distant memory and the 46m long, 8.5m wide ship was a shadow of its former self. Once the pride of the Dutch shipbuilding industry, it was in a state of complete disrepair – a rusting hulk that served as a home to a group of squatters.

That was until 2007 when a group of maritime enthusiasts led by Mario van Parijs joined forces with the sole intention of restoring the ship.

The Castor was taken to the Rijnhaven in Rotterdam and a restoration project began in earnest. Fast forward to early 2011 and as a result of the gargantuan efforts of a team of sponsors and volunteers, the vessel had been transformed to its original state

After being approached by AF-X Fire Solutions, which had furnished the ship’s engine room with fire extinguishers, Fire Products & Solutions Netherlands (FSN), one of the country’s leading providers of life safety equipment, was asked to contribute its expertise and configure a suitable fire detection system. Ruud Benjamins, FSN’s manager, explains, ‘We agreed to supply, design, commission and help with the installation of a system for The Castor based on Hochiki Europe’s market leading range of products.’

The design that FSN came up with was based on Hochiki’s innovative Enhanced Systems Protocol (ESP). ESP is a total communications solution for intelligent and integrated fire detection and provides the flexibility and expansion to accommodate simple addressable variants through to sophisticated integrated building management and safety systems.

For obvious reasons devices from the company’s range of marine approved products were chosen. Stuart Davies, marketing manager at Hochiki Europe, comments, ‘Our marine approved products have an enhanced IP rating and are designed to offer the best levels of environmental protection. Only products that have been approved for marine use by a recognised marine approvals body should be used for this type of application.’

The Castor’s fire detection system comprises a range of smoke and heat detectors along with manual call points configured around a Kentec control panel. Benjamins says, ‘We installed a total of 40 ALG-ENM optical smoke sensors which feature the Hochiki’s High Performance Chamber Technology. This chamber design minimises the differences in sensitivity experienced in flaming and smouldering fires and the result is a high performance optical chamber that is equally responsive to all smoke types and helps to reduce the possibility of unwanted alarms.’

Five ACB-EM marine approved multi-heat detectors were installed in the galley and food preparation areas. These products incorporate a variable temperature heat element and a rate of rise heat element, both of which are controlled from the control panel, allowing either thermal element or both elements simultaneously to be active in making the fire decision. These were complemented by a total of eight HCP-EM marine approved manual break glass call points, which are operated by pressing an EN54 compliant plastic element that produces a high level ESP interrupt, allowing the control panel to respond very quickly.

The installation went very smoothly and FSN’s experts were on hand to assist the volunteers wherever possible. Asked what proved to be the biggest challenge, Benjamins replies, ‘The ship is made of iron and steel, so drilling holes into thick metal was sometimes tricky and always time consuming. This was the first time we had installed a fire detection system on a ship, so it was a learning curve that necessitated a great deal of patience.’

The installation was completed in December 2011 and this graceful and powerful ship is now available to hire as a unique venue for parties, events and promotions. Even though it is now open for public use, work is ongoing and the fire detection system has been called into action on more than one occasion. Benjamins explains, ‘Recently, when some welding was being carried out, a section of dry teak decking caught alight. The situation was quickly brought under control with only minor damage but I was delighted with the fast response of the Hochiki system.’

The Castor is a prime example of what can happen when a group of like-minded individuals set their sights on achieving an objective. The ship is now one of the focal points of Rotterdam’s Rijnhaven and is open for viewing. For Mario van Parijs this represents the culmination of a long journey and he concludes, ‘Bringing The Castor back to life has not been an easy task but it has been immensely satisfying. It would not have been possible without all the help that we received and I’d like to thank FSN for installing the ship’s state-of-the-art Hochiki fire detection system that will ensure the safety of all those on board.