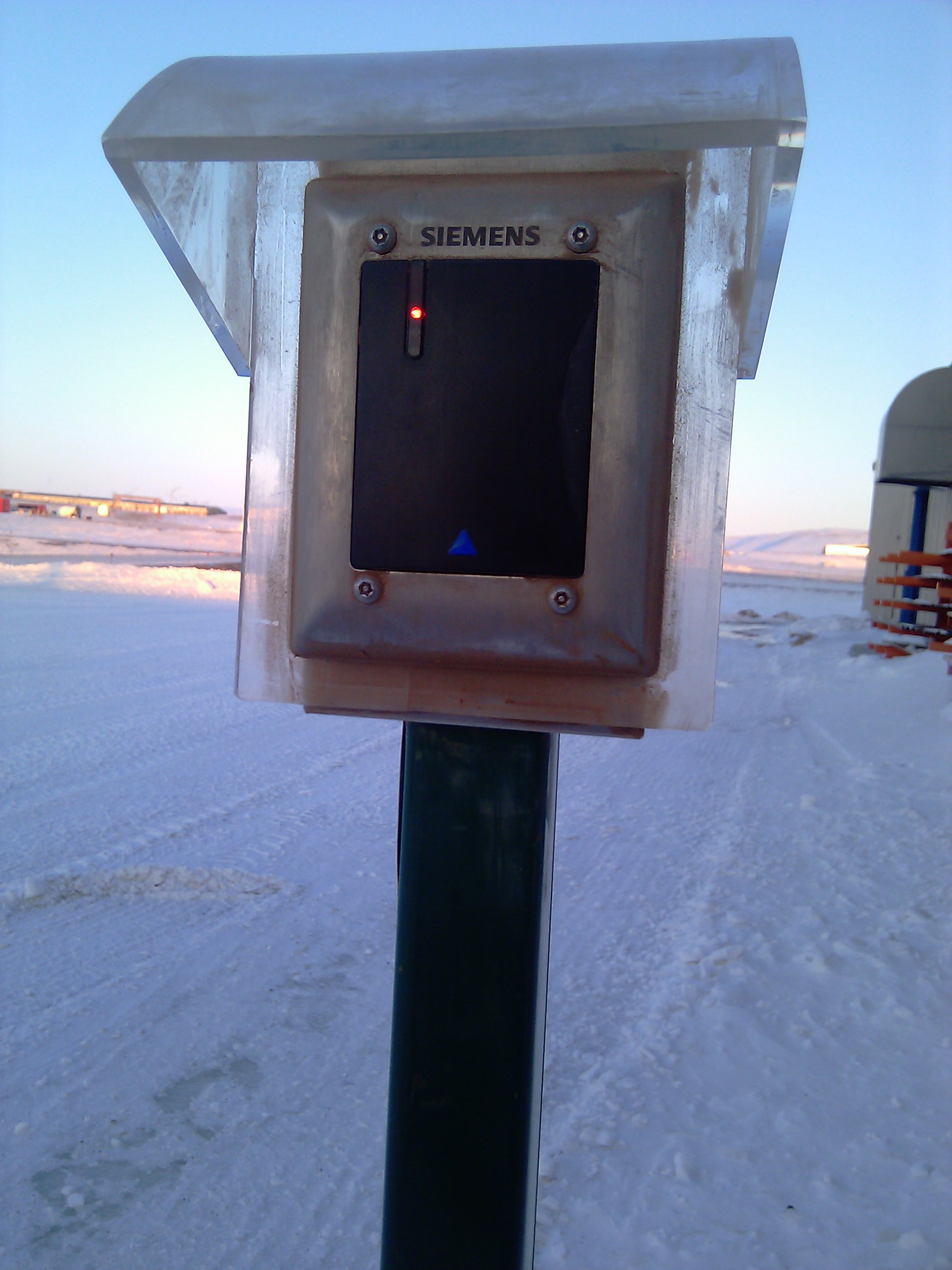 Thule Air Base in Greenland, the US Armed Forces’ northernmost location, has some of the most extreme weather in the world. Temperatures down to -60oF are commonplace, and the world’s second highest wind speed of 207 miles per hour was measured on the base. Despite these challenging conditions, standard SiPass Entro access control products from Siemens have been in use at the base for more than 10 years. They have proven to be so dependable that the installation has been extended over the years from originally one to approximately 380 doors.

Originally built in just 104 days in great secrecy at the start of the Cold War era to provide a refueling stop for US bombers on their way to targets in the USSR, Thule Air Base is now home to several US military groups, including the 12th Space Warning Squadron that operates a Ballistic Missile Early Warning System designed to detect and track intercontinental ballistic missiles (ICBMs) launched against North America.

Around 150 members of the US Armed Forces and 450 Danish support personnel live on the base, with the non-military facilities for this small “city” being operated and maintained by a Danish company, Greenland Contractors. Despite the remote location of the base, security of even the non-military buildings is an important issue. Access control for these buildings was originally provided using ordinary key locks and digital locks. However, around ten years ago, the decision was made to move to an electronic access control system which would make access management easier and give much greater flexibility.

Impervious to the cold and polar bear attacks

Finding a suitable system was not easy, however. Since many of the card readers would need to be installed outside, they would not only have to withstand the harsh arctic weather, but also operate reliably in the worst weather conditions to ensure that personnel is never stranded outside. In addition, the system would have to cope with high levels of static electricity resulting from the very dry air at the base.

After carefully evaluating the available options, Greenland Contractors decided to install a system using products from the SiPass Entro range, not only because they operate dependably in harsh environments – it has even been suggested that the vandal-proof card readers used in outdoor locations could resist polar bear attacks – but also because the system combined flexibility and scalability with ease of use and excellent value for money.

The original Siemens installation covered 280 doors in 36 buildings, including doors giving access to accommodation areas, leisure facilities and dining areas. Centralized control was provided by four computers in the base’s Hilltop security facility. Additionally, provisions were made for base technicians to plug a portable PC directly into the segment controllers in each building to help with error diagnosis and maintenance.

In addition to the standard access control functions, which include an anti-pass-back feature to prevent double access, the installation was configured to provide a booking system for the solarium, which is very popular during the three months of the year when the sun is permanently below the horizon. Those wishing to use the solarium log into the SiPass Entro system’s website to make a reservation. When they arrive at the solarium, they use their access control card to “turn on the sun.” If they show up at the wrong time or without a reservation, however, the system ensures that they get no sun.

Provisions are also made for unlocking and locking doors remotely from the Hilltop central control station to ensure that personnel who forget their cards can get into the buildings to escape the sub-zero temperatures prevalent at the base. Additionally, the system offers a person count facility that can be used to ensure that all persons are safely indoors when a bad weather alert is in force.

When the decision was made to enlarge the living quarters on the base, Greenland Contractors looked carefully at the best way to expand the access control system in order to cover an additional 99 doors. Once again, the company decided to use SiPass Entro because the original installation had performed flawlessly for a decade.

An important additional benefit was that today’s Siemens products retain full backwards compatibility although the products in the range have evolved greatly since their initial installation at the base. This makes it easy to integrate the new and existing modules of the installation and to provide unified management for the entire system.

Flexible solution for use in extreme weather conditions

“When we first installed the Siemens Entro system a decade ago, it replaced ordinary key-operated locks and code locks that did not give us the control and convenience we needed,” says Martin Søgaard of Greenland Contractors. “Then as now, Siemens system provides a complete and effective solution. It now covers approximately 380 doors in 57 buildings, and with it we can easily produce cards that give personnel on the base access to any combination of doors. We can also readily change authorizations when duties change and make sure that if someone leaves the base their card is no longer valid. These things are very important, as people are constantly arriving at and leaving the base.”

“Another important feature is that the Hilltop security management center can use the SiPass Entro software to give the fire brigade unobstructed access to buildings in the event of a fire alarm. This extra time can be extremely valuable in an emergency.”