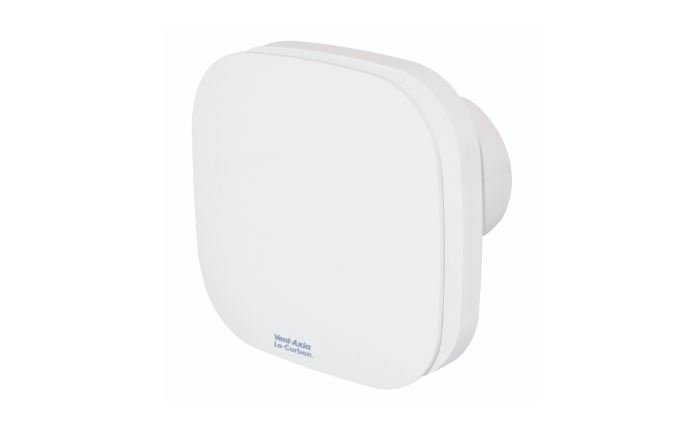 The new Lo-Carbon Response™ from Vent-Axia is a discreet, near silent, continuous running, constant volume dMEV solution. Designed for both new build and the social housing sector, the SAP Appendix Q listed Response is ideal for both kitchen and bathroom applications. Providing excellent pressure while still maintaining high energy efficiency, the Response features an innovative digital display that confirms airflow and system pressure of the installed product.

Offering peace of mind to both developers and installers, the unique Response provides optimum performance and clarity. Since the introduction of the new Domestic Ventilation Compliance Guide with Part F 2010, there is a requirement to test the installed airflow of extract fans. As a result installers are required to run tests with an airflow measuring device, such as a vane anemometer. However, with the Response there is no need to run these tests since the fan’s unique digital display (patent pending) provides the calibrated installed airflow and pressure of the installation.

For installers the Response’ digital display significantly simplifies and speeds up commissioning thus reducing time on site. Not only does the display show the fan is performing efficiently but its system pressure reading can also confirms that ductwork is installed correctly.

Meanwhile, the dMEV Response’ constant volume technology provides optimum performance automatically adjusting the speed of the fan to ensure that the desired airflow is delivered. With the Response’ new silent higher pressure axial impellor the requirements of many domestic installations are met without the need to use a centrifugal fan.

The Response’ new high pressure silent axial impellor enables the fan to not only develop great installed performance over duct runs, but to do this in the most energy efficient way. The fan delivers excellent pressure whilst not wasting energy on high pressure at low air volumes.

Ian Mitchel, Product Marketing Manager – Residential, explains: “Existing centrifugal fans often develop pressure but the actual installed air flows may mean that the pressure is of no use as the airflow is below the requirement. With the Response the pressure adjusts to meet demand, as a result the Response saves up to 64% of the specific fan power (SFP) of the SAP Appendix Q data for existing centrifugal alternatives.”

In addition, as standard, the Response is designed to delay activating for 3 minutes when the bathroom light switch turns on, and if the light is switched off before 3 minutes, the fan does not come on. This removes nuisance running during the night when the householder does not want to wake others in the house. An innovative comfort control option (patent pending) has also been included which, when selected at installation, activates the fan on a reduced speed for the first 20 minutes then slowly ramps up to boost to clear steam. Thus offering households a peaceful and steam free bathroom.

For social housing the Response features another attraction, a unique Datalogger which records whether a fan is active or idle. If a fan has been switched off and mould appears, the landlord will realise why and can discuss a solution with tenants. This helps landlords make homes safer for tenants by helping to avoid condensation and mould which can lead to respiratory problems and allergies.

Designed to operate as a continuous running axial fan, the IPX4 rated Response offers 6l/s or 8l/s trickle speed ventilation and a 13l/s boost speed. Fitted with 100mm spigots, common to traditional intermittent extract fans, the Response is ideal for both new build and refurbishment projects. A switched Live 220-240V input allows the fan to be boosted by a range of Vent-Axia’s switches and sensors, or a single light switch.

In addition, its multi-orientation grille can be rotated by 90/180 degrees to suit ceiling configuration requirements. The Response’ design also aids ceiling installation as it features rounded corners, this helps siting the fan in older properties where rooms may have irregular angled walls making it tricky to install a square cornered fan evenly and neatly on the ceiling.

The Response is part of Vent-Axia’s Lo-Carbon™ collection. The aim of the Lo-Carbon initiative is to offer the latest low carbon ventilation technology in order to reduce building energy consumption and so carbon emissions.