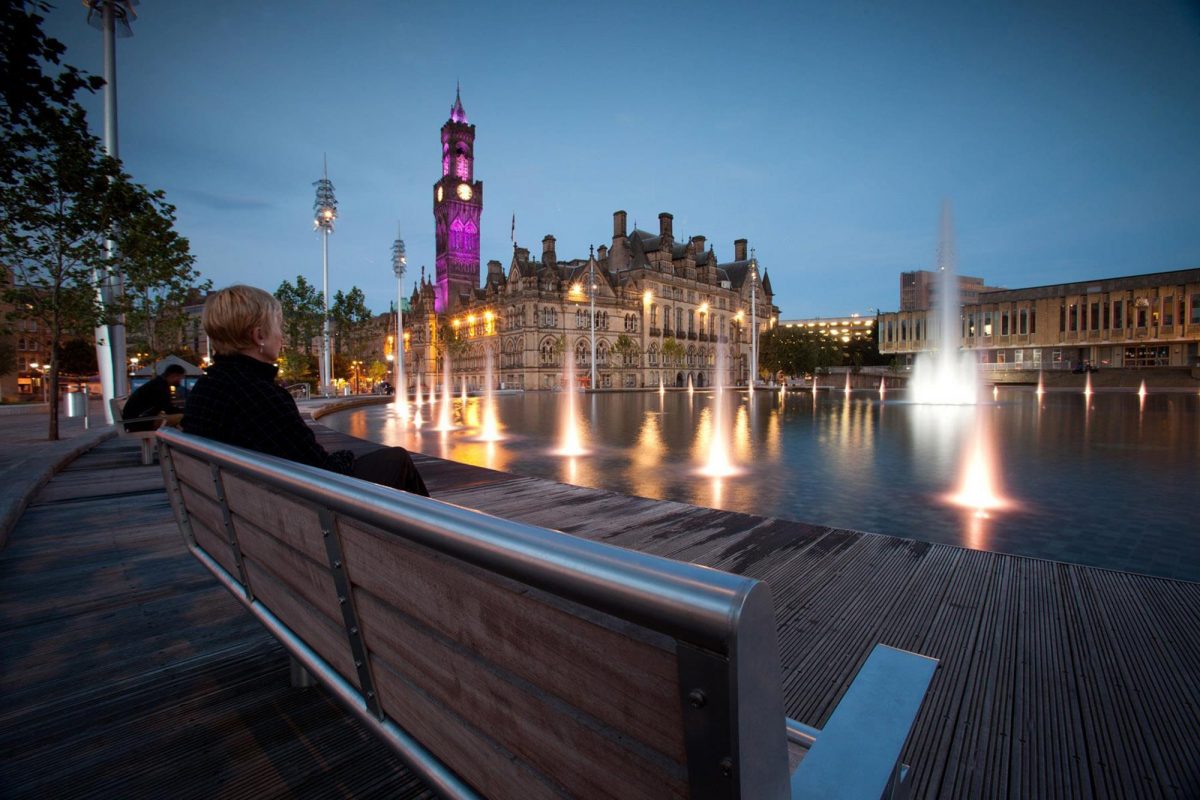 City Park’s 4000m2 mirror pool features more than 100 fountains, including the tallest in any UK city at 30m (100ft), laser light projectors and mist effects. This unique feature reflects and showcases the Grade 1-listed City Hall and sets Bradford apart. City Park, and the mirror pool in particular, is an adaptable environment which is capable of holding events such as carnivals, markets, theatre productions, screenings and community festivals.

It was mocked in its earliest days, as a dotty dream, an architect’s fancy or just the “puddle in the park”. But after nine years of arguments and scrabbling for money, the Yorkshire city of Bradford has pulled it off: a vast mirror pool splashed by 107 fountains now glistens beside the Victorian city hall.

Camera-controlled lasers also plays tricks with visitors after dark, lassoing them with loops of light as they stroll around an area as big as three full-sized football pitches. Other features include “walking on water” – a narrow causeway across the flooded area – children’s fountains that throw balls of water at one another, and a central jet with a maximum reach – reserved for special events and dubbed the Bradford Burst – of 30 metres.

Praise received from passing tourists will delight Bradford’s cabinet member for regeneration, Labour councillor David Green, and the council’s Strategic Director, Barra Mac Ruarí, who have overseen the plan’s implementation. The lake has changed shape from Alsop Architects’ original teardrop – “It virtually lapped at the walls of City Hall and we weren’t sure about that,” says Green – but the scale and ambition are a match for Bradford’s grand 19th-century “Woolopolis” heyday.

In the same spirit, pre-launch VIP visitors for the new water feature have been ushered into the urban lake’s underground workings – six kilometres of piping and a tank like a Byzantine cistern in Istanbul. “We have got to think big and be bold because that is the way to bring in business and visitors,” says Mac Ruarí.

The pool and its sinuous park, which has London plane, larch and Scots pines planted instead of dinky blossom trees, won all-party support on independent estimates that it would bring £80m a year to Bradford. Officially called the City Park, it connects the Victorian centre of Bradford with the National Media Museum, the Alhambra theatre and the university, whose buildings and parkland run up a gentle valley to the west.

Attention now turns to attracting new businesses to finance a cluster of proposed office blocks beside the pool, and the long-awaited completion of a Westfield shopping mall on the other side of city hall. The recession stalled work there when only the foundations had been laid, leaving a desolate empty space nicknamed the Hole in the Heart, marginally improved in the last two years by a temporary minipark.

Other challenges include converting the derelict Odeon cinema, which overlooks the mirror pool, into offices with Homes and Community Agency funding, and talking up the image of Bradford as more than Leeds’ has-been, poor relation. Gideon Seymour, who runs an art gallery between a cafe and a restaurant by the pool, says: “Each success breeds more, and the pool and fountains are the biggest success so far.”

To enhance the public’s experience of this striking feature, Bailey Streetscene was approached to provide the street furniture surrounding the pool.

The high quality feel of this scheme required high class design and material finishes to the products selected which Bailey Streetscene was able to supply. Stainless steel and Iroko timber seating were selected, along with stainless steel litter bins, cycle stands and bollards. Design detail, as built drawings along with material samples to aid the selection process were provided to the client for approval. The finished installed street furniture reflects and complements the high quality of the overall scheme and adds to the popular and useable features of the space. 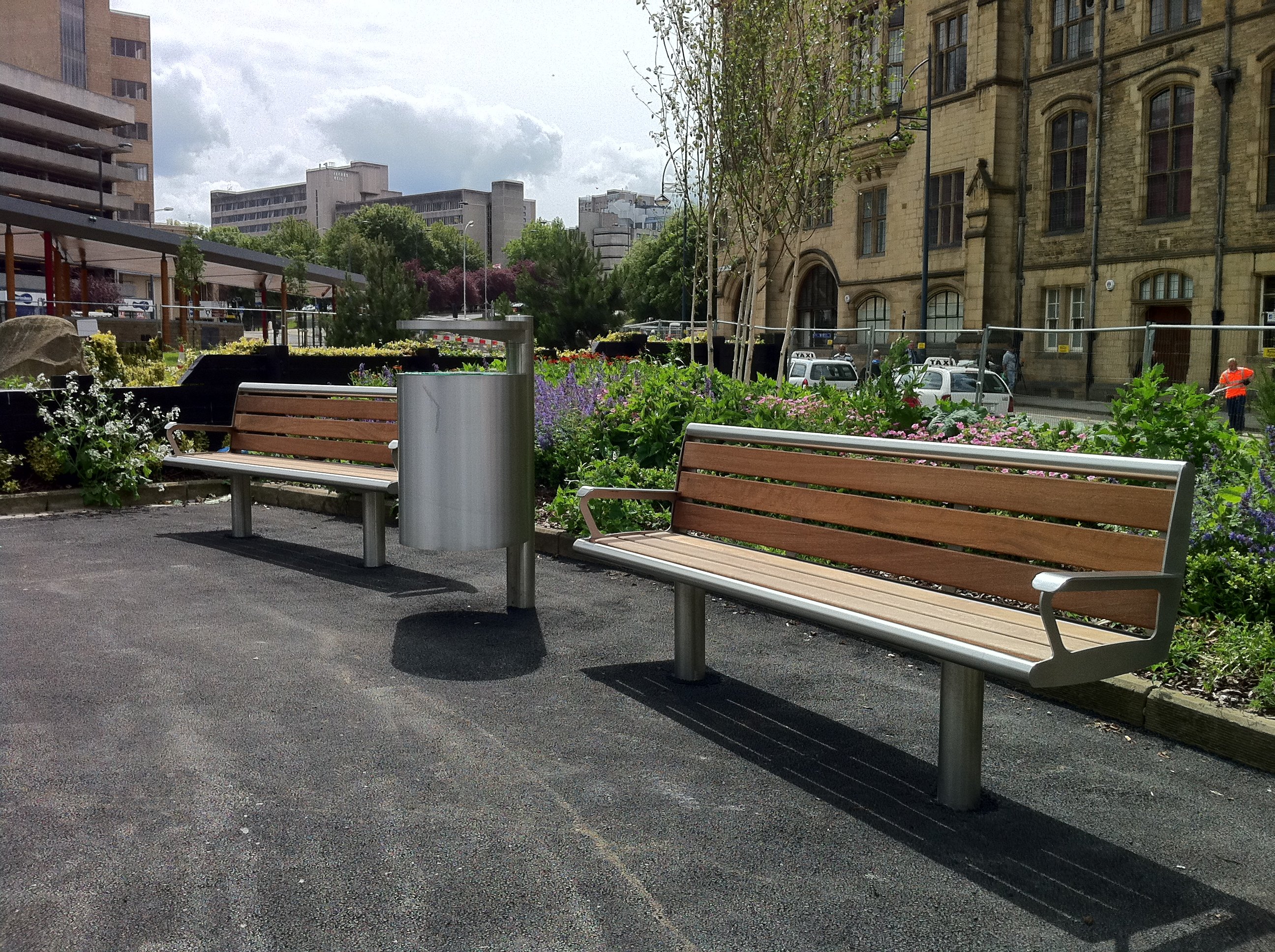