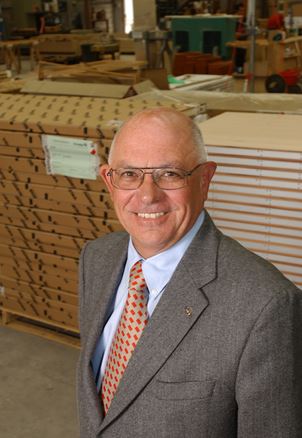 Peter Johnson has announced he will retire as Managing Director of Vicaima Limited at the end of June 2014.

After nearly two decades steering the growth of this leading interior veneered door manufacturer, Peter Johnson, MD of Vicaima Limited, has announced his retirement.  Peter is a well known figure throughout the timber door industry, having started out his career with Crosby Doors in the late 60’s in a technical capacity; he soon became Operations Director and latterly Deputy MD.  From Crosby he moved to veneering specialists, Midland Veneers where he became MD, before joining Vicaima in 1996.

Peter has been instrumental in the development of Vicaima UK, from a relatively small subsidiary within the Vicaima Group globally, to the major manufacturer and distributor of fashionable European door solutions it has become today.  As a keen advocate of properly certified Fire Doors, Peter has also served as Chairman of the BWF-Certifire scheme.  Peter plans to enjoy his retirement playing golf in Portugal.

Following the departure Peter Johnson from Vicaima UK at the end of June 2014, Group Chairman Arlindo C Leite announced the appointment of Barry Waddell as the new Vicaima UK Managing Director. “As Commercial Director with Vicaima since 2012, Barry is well placed to take on the challenges ahead and steer future growth to capitalise on the ever growing demand for Vicaima’s range of quality interior door solutions”.