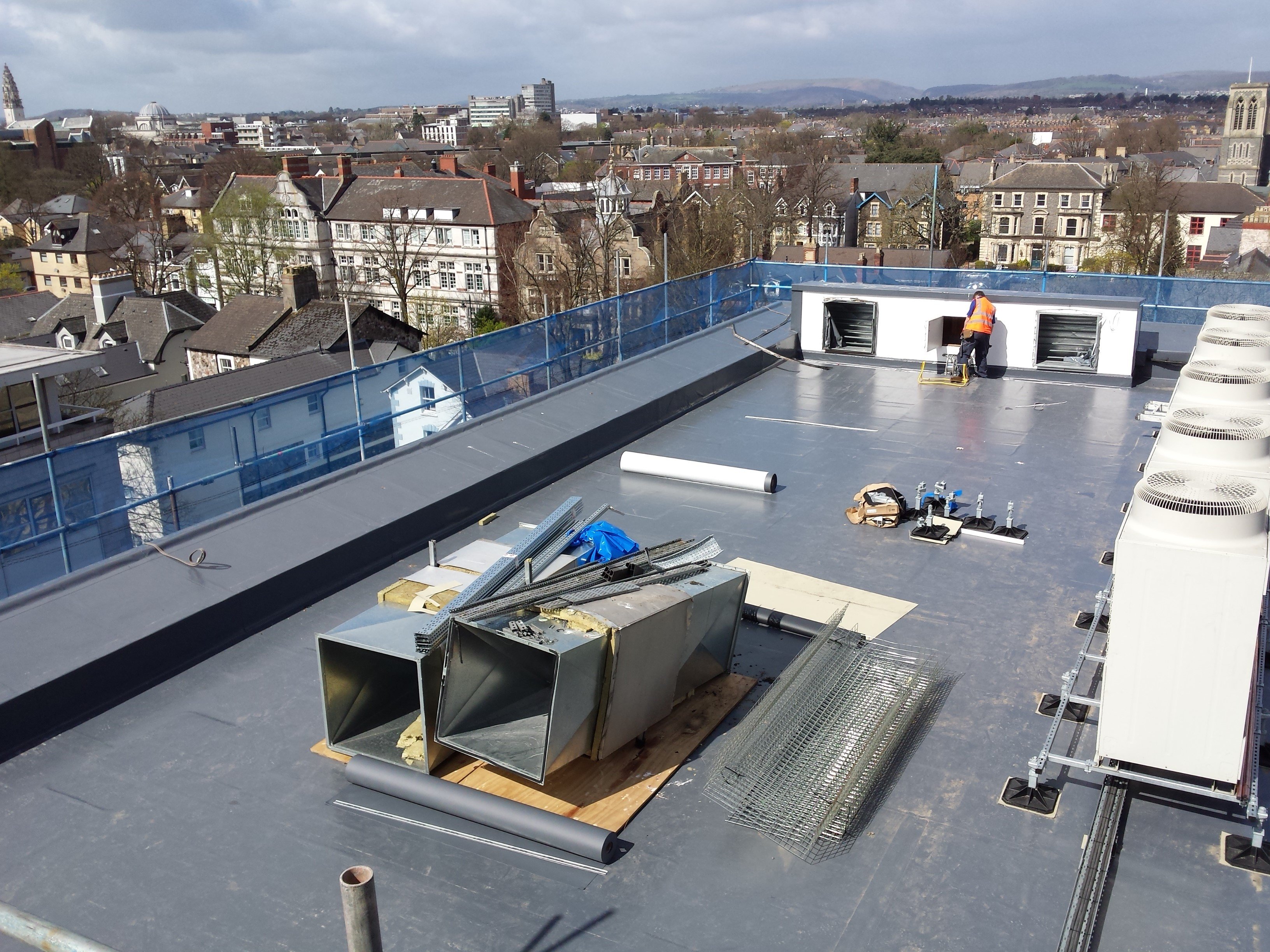 In 2013 The UK Border Agency facilities management team contacted construction company Interserve with severe concerns about the flat roof on their building. Substantial areas of standing water had formed on the existing coverings and the large quantity of roof-mounted air conditioning plant would likely hamper the effectiveness of any repairs.

In November 2013 Interserve tasked Owlsworth Roofing with advising on the most suitable long-term waterproofing solution for the roof. With 30 years’ experience within the construction industry, solving some of the most complex flat roofing problems, Owlsworth was well placed to lend its expertise to the project.

Following a site assessment, Owlsworth recommended a full roof refurbishment before any major problems began to occur, which would include the difficult task of removing and reinstating all of the existing roof plant.

The scaffolding went up in February 2014 and in March the works began in earnest with cut-to-falls insulation bonded to the existing roof coverings to help reduce standing water. Then, in order to provide a long-term and cost-effective waterproofing solution for the building, Owlsworth chose to install Sika Sarnafil roof coverings. Sarnafil G410-15ELF was selected thanks to its outstanding resistance to weathering and ease of installation.

The internal upstand kerbs needed to be raised to fully surround the stone parapet around the external elevations of the building. This was in order to accommodate the increased thickness of insulation, which exceeded 300mm in places.

To further guarantee a watertight finish and to keep the roof sound for years to come, the stone parapet was covered with a layer of Sarnafil G410-15EL membrane, finished with pre-fabricated Sarnametal edge trims around the entire perimeter. Sarnafil rain water scuppers were then installed to carry rainwater through the parapets into the existing external hoppers and downpipes, thereby removing any chance of standing water.

The original roof mounted plant was carefully reinstated on a combination of G445-13 protection sheet and inverted G410-15ELF sacrificial pads and then reconnected. This was followed by reinstalling the roof mounted handrails and adding a new non-slip Sarnatred walkway for future access and maintenance. The project was completed in April 2014.

Peter Mably, Owlsworth Roofing, said: “The UK Border Agency project is a fantastic example of how a single ply roof should look even when used in conjunction with lots of plant. The complex level of detail on this refurbishment was a challenge but our skilled team and the quality of the Sarnafil product produced fantastic results for the client.”