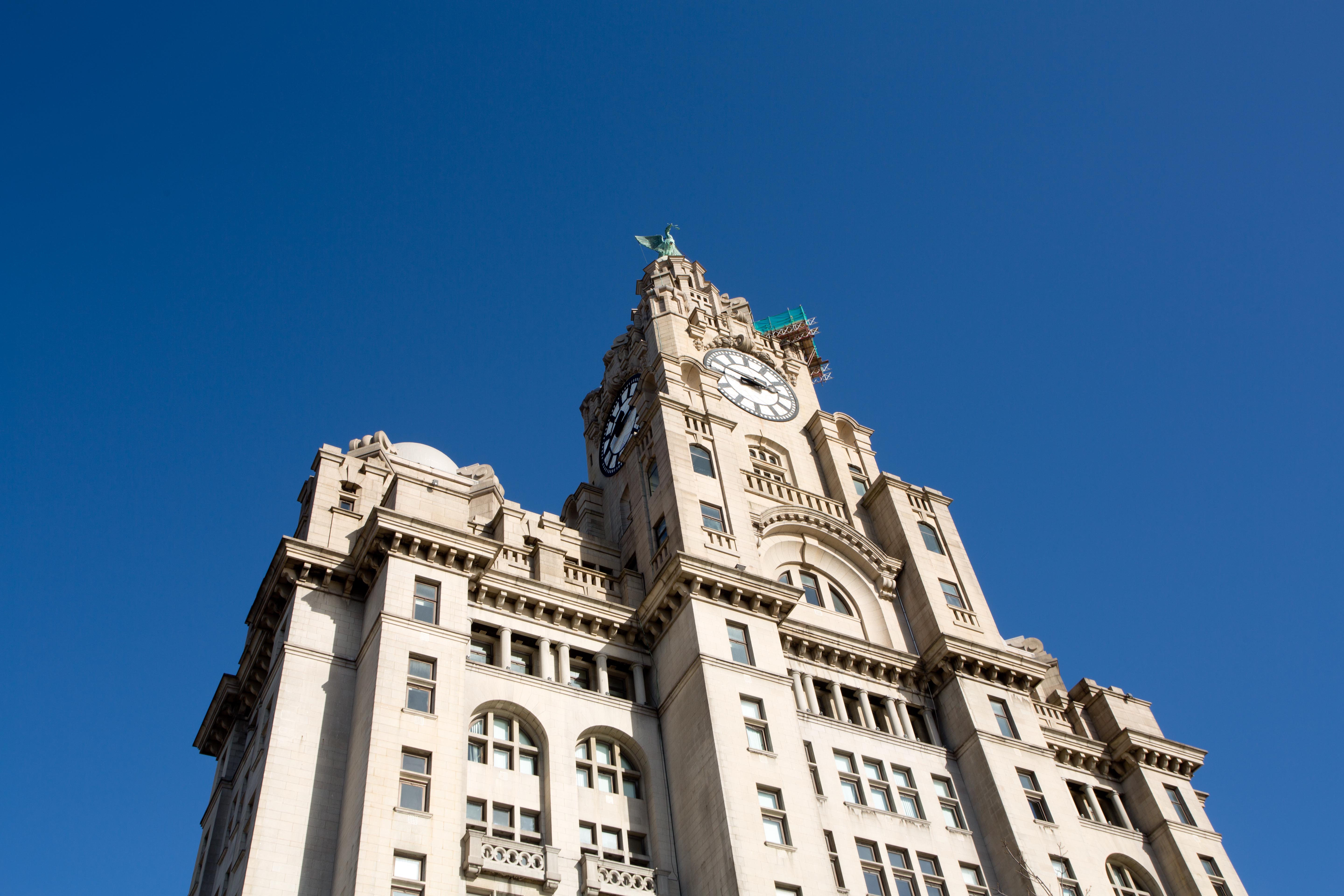 Part of Liverpool’s UNESCO designated World Heritage Maritime Mercantile City, the Grade I listed Royal Liver Building is one of the city’s ‘Three Graces’ and an iconic waterfront landmark.

The building’s imposing façades are crowned by a cupola in each corner, each forming the roof of a feature boardroom office below. The huge clock towers either side of the building mirror this pattern, with a ‘mini’ cupola on each of their four corners. All 12 cupolas direct the eye upwards to the summit of the building where a verdigris Liver Bird perches eternally on each of the final, central cupolas.

With Cunard, one of Liverpool’s greatest companies, celebrating its 175th anniversary this year, it was time to refurbish the distinctive cupolas of one of its most famous buildings in the world in time for a celebratory flotilla.  Kemper System’s 1K-PUR cold liquid-applied waterproofing system was selected to complete the challenging scheme. 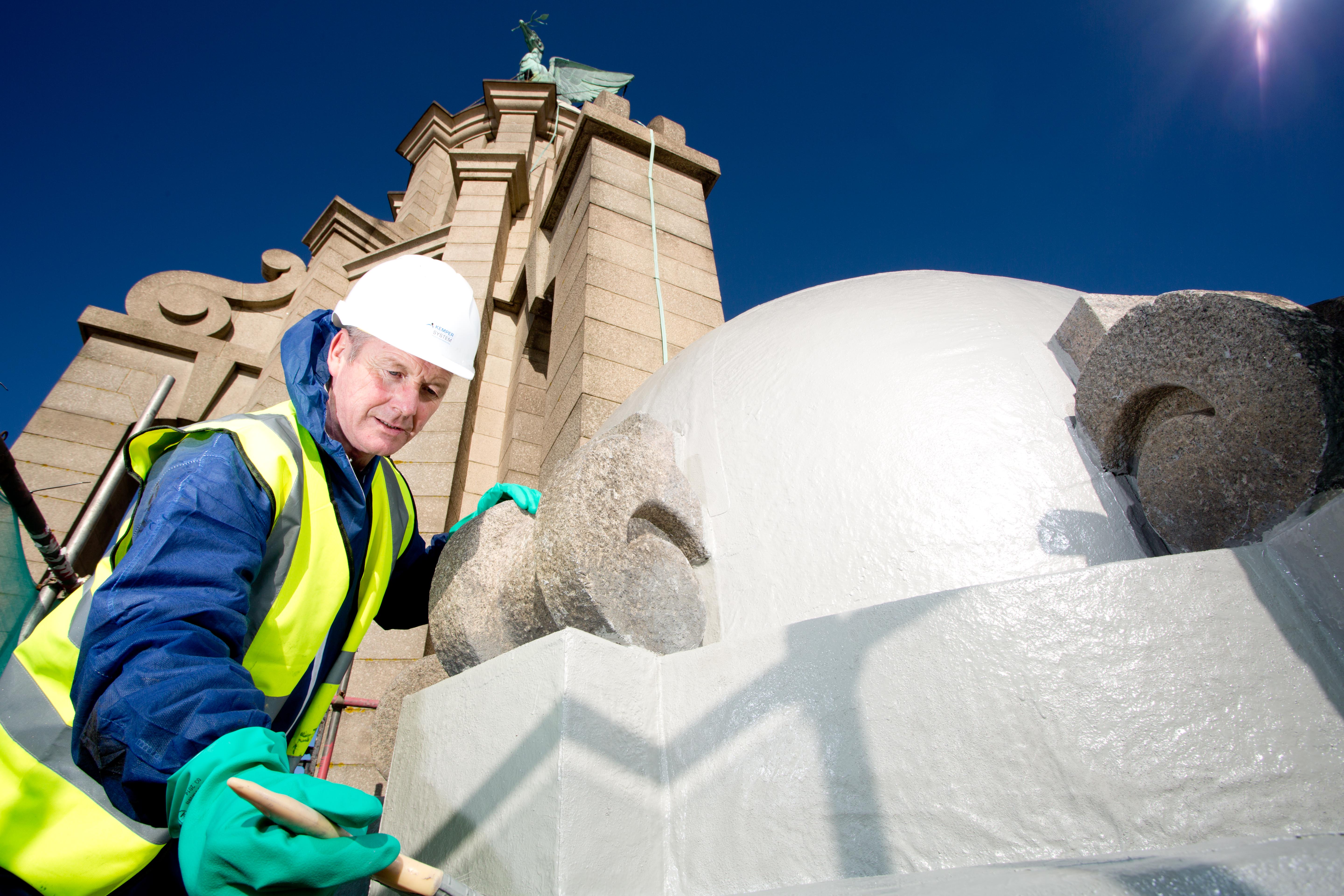 The cupolas are of concrete construction and have been protected by various waterproofing systems over the years but water ingress was becoming an issue and in some areas the concrete was failing and had to be repaired to return the surface to its original domed shape.

Roofing contractor, K Pendlebury & Sons Ltd were appointed by main contractor Quadriga Ltd, specialist restoration contractors, to carry out the challenging task of working at height on the roofs in an exposed waterfront location.

Comments Neilan Symondson from Pendlebury: “Scaffolding was erected on a small area of the roof at a time and an upgrade to localised areas of the roof beneath each cupola, along with a larger stretch on the Strand elevation, was incorporated into the scheme to capitalise on the accessibility we had to those locations while the scaffolding was in place.

“For these areas, we installed an inverted insulated roof build up, using Kemper System’s V210 cold applied waterproofing system to waterproof the substrate, followed by insulation and then paving.

“The Kemperol 1K-PUR we used for the cupolas works in the same way, with a combination of liquid resin and reinforcement fleece, but it is much more viscous that the Kemperol V210, making it more suitable for the cupolas’ vertical surfaces.”

Pendlebury selected the Kemperol 1K-PUR systems following trials carried out prior to commencing the project to ascertain the best approach to delivering the project with the level of finish required by the building’s management company, CBRE, and English Heritage while managing the time constraints of the project.

The challenging weather conditions of the building’s waterfront location and the need to identify a system that was suitable for the varying surfaces on and around the cupolas also influenced the specification. The method of fleece application and ease of use of the Kemperol system was ideally suited to meeting these criteria on a scheme that involved working up to 14 storeys high.

The installation team began the restoration of each cupola by repairing each concrete structure using Kemper System’s primer mixed with quartz sand to make a mortar that could be used to build up the eroded areas.

The large cupolas have a two metre high vertical surface before the structure starts to curve and gradually become flat over the top. Pendlebury used a combination of Kemper System’s EP5 primer and quartz sand to create a key on the substrate before applying the liquid Kemperol 1K-PUR resin with brushes and rollers. Kemper System’s 120g reinforcement fleece, cut to size and shape on site, was then laid onto the wet resin. Finally, further resin was immediately applied over the top to allow complete saturation of the reinforcement fleece in a single wet-on-wet process to provide a totally seamless, monolithic membrane.

For the larger cupolas, the scheme also involved scroll features and termination details and the installation team also painstaking applied the system around the solid granite mini scroll features that surround each of the smaller cupolas.

CBRE’s Simon Hepple adds: “In terms of surface area, the Royal Liver Building scheme was not large but is was extremely challenging and required both a specialist approach and careful product selection.

“Kemper System’s Kemperol 1K-PUR was ideal for this unusual project.”