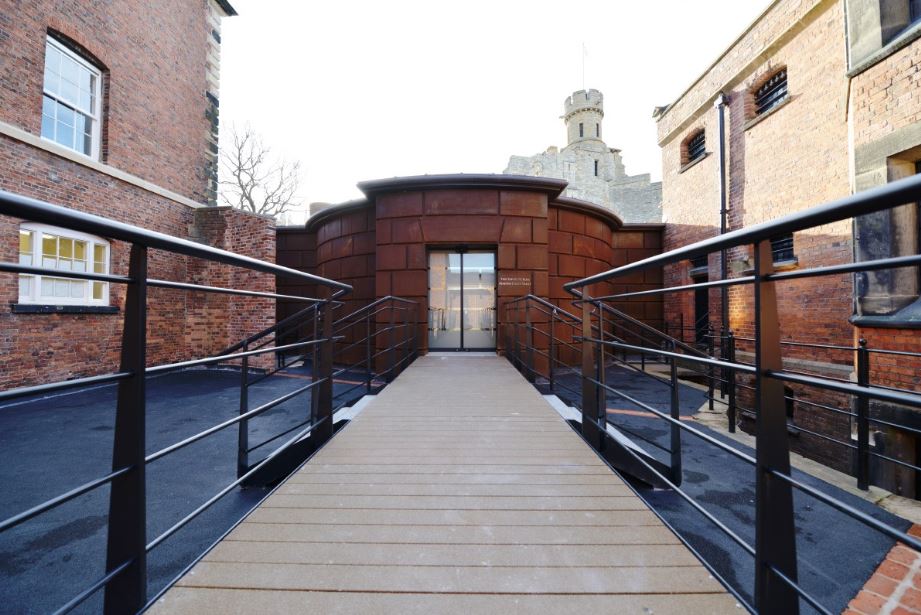 One of the most famous historical documents in Britain, if not the western world, is being protected by extinguishing and fire alarm panels from Advanced with installation by Reflex Systems. Sealed by King John at Runnymede in 1215, Magna Carta is celebrating its 800th anniversary (the actual anniversary is 15 June). It is the first example of an absolute monarch surrendering some of his powers, the beginning of a process that led eventually to our current system of government and the prototype for democratic government all over the world. The version protected by Advanced is particularly precious being one of only four surviving original 1215 Magna Carta sealed by King John and is kept in a special vault at Lincoln Castle, itself a Scheduled Monument, alongside Magna Carta’s sister document The Charter of the Forest (1217).

Lincoln Castle, one of the best preserved in England was constructed in the 11th Century by William the Conqueror, and is one of only two to have two mottes. The fire and suppression systems installed by long-time Advanced partner Reflex Systems incorporate two MxPro 5 panels in the main heritage centre and the former Victorian prison building, which closed in 1878. Advanced’s ultra-dependable ExGo extinguishant release system has been installed in the Magna Carta vault. ExGo has been developed specifically for sensitive and strategic assets such as server rooms, historic and cultural attractions and control rooms. It has been installed in high-profile buildings across the globe, including the Romanian National Library and along oil pipelines in Sudan. MxPro is the industry-leading multiprotocol fire system. Offering real choice and flexibility, it includes two panels ranges, the EN54-2&4 approved MxPro 4 and EN54-2,4&13 approved MxPro 5. It offers four protocols, Apollo, Argus, Hochiki and Nittan and a completely open installer network that benefits from free training and technical support. John Pye, Managing Director of Reflex Systems said: “Lincoln Castle required an open protocol fire system and we knew that Advanced panels could deliver maximum reassurance and long term reliability. Having worked with Advanced in the past, we knew that the equipment would be of the highest quality for such a historic building plus the system offers the flexibility to meet future requirements.” MxPro 5 panels can be used in single loop, single panel format or easily configured into high speed, 200 panel networks covering huge areas and tens of thousands of field devices. In total, one MxPro 5 four-loop panel was installed in the main prison building and one MxPro 5 two-loop panel was installed in the heritage centre. ExGo is suitable for almost all single-flooding area applications and includes a range of control options and devices. It is approved to EN54 parts 2, 4 and 13 and EN12094-1 and is among the first systems to combine these with EN12094 Part 3 in a single solution. EN12094-3 relates to the integrated manual release on the front of the panel. ExGo can be integrated into Advanced’s Axis and MxPro fire panels, or any third party fire system. A spokesperson for Lincoln Castle commented: “We’re very pleased with the Advanced systems installed by Reflex. As the Castle is a listed building, it was essential that the panels and detectors be as discrete as possible, particularly in the prison and the Magna Carta Vault. This year marks the 800th anniversary of the sealing of Magna Carta and we are happy that our visitors will be able see one of the four original copies under the protection of Advanced panels.” Neil Parkin, Sales Manager for Advanced added: “Advanced fire systems are famous for their quality and ease-of-use and being specified to protect life and cultural assets of this importance is testament to our work to stay at the forefront of the market. As a company we are proud of all of our jobs but this one is very special. They don’t come up very often and it says a lot about Advanced products that we are the first choice.” Advanced is a world leader in the development and manufacture of intelligent fire systems. The legendary performance, quality and ease-of-use of its products sees them used in prestigious and challenging locations all over the world, from single panel installations to large multi-site networks. Advanced products include complete fire detection systems, multi-protocol fire panels, extinguishing control and fire paging systems. More details can be found on the website at www.advancedco.com. Follow @Advelsales