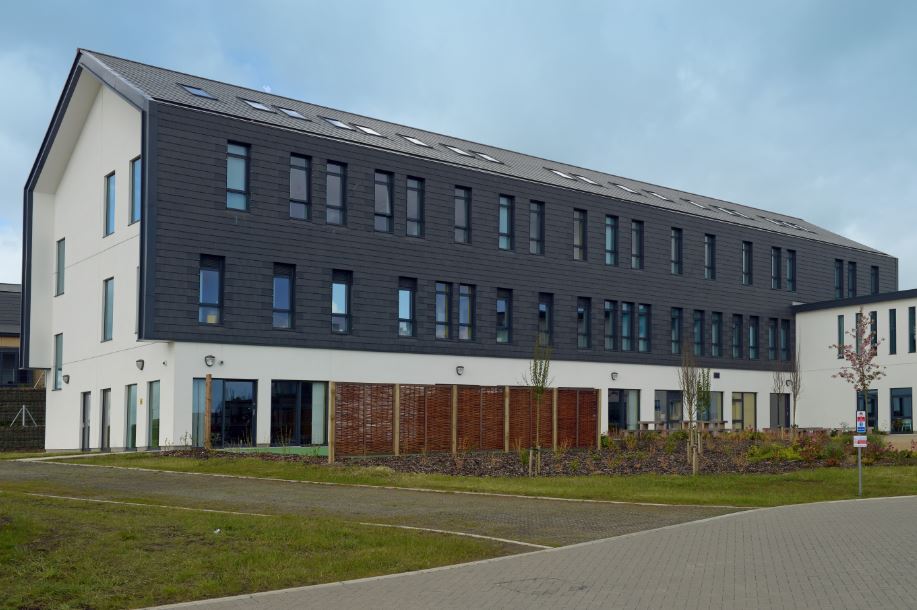 Redland’s Cambrian Slates were specified for the roofing and cladding of a multi-award-winning psychiatric hospital, Hopewood Park in Sunderland, because of their light weight and classic aesthetic quality.

The £40million facility was designed to create a relaxing and non-clinical environment for patients suffering from a range of psychological issues. The state-of-the-art hospital is a feat of ingenuity and the roof design represents the first step towards a new method of roofing.

In a bid to save time and reduce the possibility of on-site accidents, Senior Architect Paul Yeomans from Medical Architecture worked closely with Redland’s specification team to design a roofing system that could be built at ground level and would not require scaffolding.

Paul explains: “We decided to use pre-tiled cassettes that could be lifted up to the roof and fixed together. We felt that this was the best way to deliver a visually appealing roof whilst minimising the time spent up there and therefore the opportunity for injury to the workforce.”

The slates had to be lightweight to make the process of craning the cassettes up off the ground and securing them onto the roof as easy as possible. Cambrian Slates are made from over 60% recycled Welsh slate, meaning they are able to capture the character of natural slate while performing on low pitches and being light in weight.

Speaking about the project, Paul Trelease from Barclay Roofing Ltd said: “This was one of the most challenging roofing projects I have been involved with. The tiles had be laid to millimetre precision otherwise they would not interlock correctly once the cassettes had been lifted onto the roof. It was certainly a learning curve for all involved, but we pulled together and created something out of the ordinary.”

Paul said: “We looked at a number of samples and found that Redland’s Cambrian Slates were the closest match to what we were looking for. We worked closely with Redland to make the design specification work and we were all really pleased with the end result.”

Since completion, Hopewood Park has won multiple RIBA awards, been nominated for an National Federation of Roofing Contractors Award, and for several other awards.