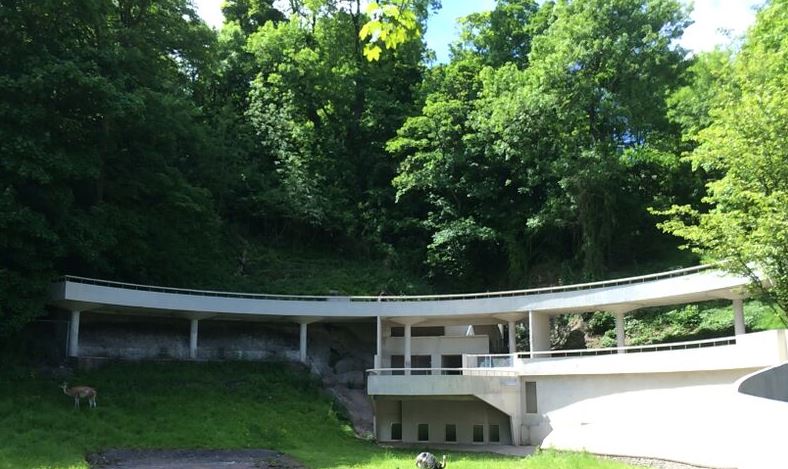 Dudley may not be a location that would spring to mind when making a list of the world’s most remarkable architectural landmarks but it has some hidden treasures so precious that they were granted World Monuments Fund status in 2009, which places them in impressive company alongside iconic heritage sites including Machu Picchu and the Taj Mahal! 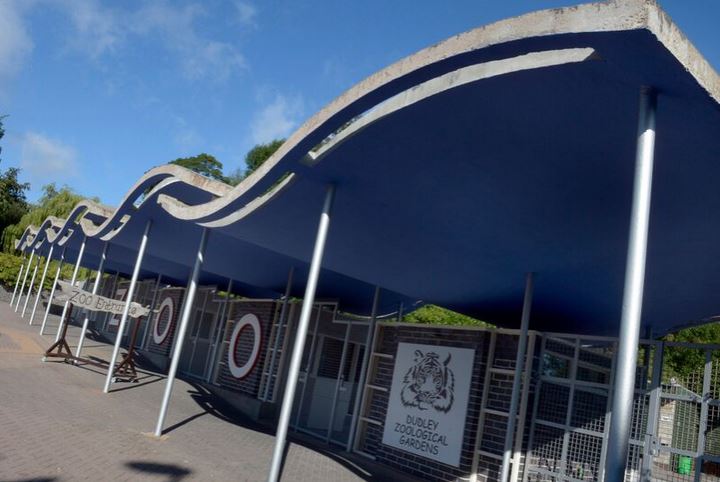 The structures in question are the Tecton buildings at Dudley Zoological Gardens (DZG).  There are 12 of them in total, each designed by Bethold Lubetkin and his Tecton practice.  They are the world’s largest single collection of Tecton buildings and some of the few remaining UK examples of this innovative and influential architectural movement from the 1930s and 1940s.

“When Dudley Zoological Gardens was first planned and built, this radical, ultra-modern approach to design and construction enabled the architects to work with the challenging slopes and underground limestone caverns on the site to create a visitor attraction full of visual appeal that looked completely new and exciting.”

It’s hard to imagine the enormous visual impact that the Tecton structures must have had on zoo goers when DZG first opened to the public in 1937, with their futuristic forms contrasting with the site’s 11th century castle.

Over the years, trends in zoo best practice have meant that some of the structures are no longer in use as viewing enclosures. Time has also taken its toll on the wear and tear too. The DZG Tectons were put on the World Monuments Fund’s watch list of world class buildings threatened by neglect, demolition or disaster in 2010.

As a result, a lottery-funded project is now underway to preserve and protect the structures for future generations.

Among the Grade I and Grade II* Tecton structures that have so far been refurbished at Dudley Zoological Gardens, under the watchful eye of English Heritage, are the entrance canopy and ticket kiosks, concession stands, and the impressive ‘Bear Ravine’ which was once used to allow zoo visitors to view the bears from above at close range. 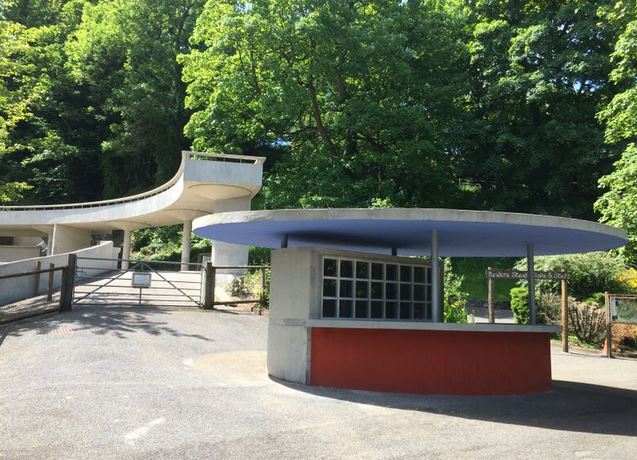 One of the main priorities of the refurbishment programme is to protect the structures from water and environmental damage due to rainfall, which led to the specification of a cold liquid-applied waterproofing system from Kemper System.

Explains Stuart Hicks from Kemper System: “The Kemperol waterproofing products from Kemper System can be applied to the exact contours of the existing prepared concrete substrates in a single process.  They cure to form a monolithic membrane that is chemically bonded to the structure and provide an ideal base for the decorative and slip resistant quartz aggregates chosen to match the look of the original structures.

“As a result, the Kemperol system and aggregates used for the entrance canopy, kiosks and the Bear Ravine provide the least obtrusive solution to ensuring long-term protection for the structures without any significant changes to their appearance.” 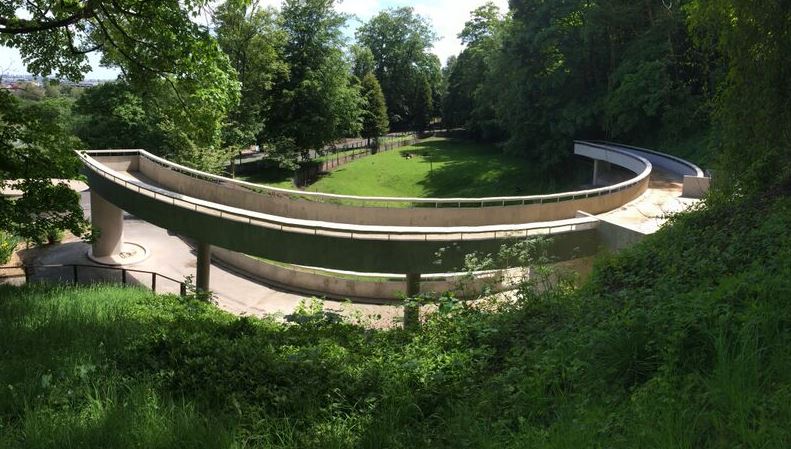 The first project of the refurbishment programme to be delivered was the entrance canopy which consists of five horizontal ‘S’ shapes, each overlapping the one before to create a wave like ripple that announces the word ‘ZOO’ in big white letters below. 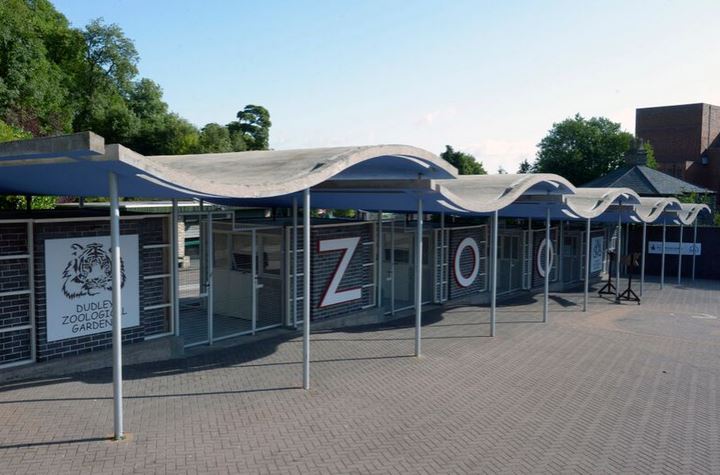 Stuart continues: “The entrance canopy is an iconic feature of the zoo but the curved shapes catch rainfall, which makes the structure vulnerable to standing water and the damage it can cause.

“Being cold liquid applied, Kemper System’s Kemperol 2K-PUR waterproofing system was ideal for following the exact contours of each curve.”

The Kemperol system was also used to waterproof the roofs of the four ticket kiosks that are located beneath the entrance canopy, which were originally constructed without any waterproofing protection at all.  This was because the structural concrete was perceived to be robust enough to withstand weather conditions, especially given the shelter afforded to the kiosks by the entrance canopy.

However, the risk of leaks to buildings of such architectural significance, which are built from concrete that is now almost 80 years old, prompted DZG to incorporate the ticket kiosks into the roofing programme.

Specialist contractor, Dent Roofing, was tasked with carrying out this aspect of the project, installing the Kemperol system to two kiosks at a time in a phased programme to enable the Zoo to keep the remaining two kiosks operational and thereby avoid any business interruption during the works.

Each kiosk has a flat roof with a single outlet in the centre for drainage. Dent Roofing began the installation by applying Kempertec EP5 primer to the bare prepared substrate followed by the Kemperol resin. The resin saturates a reinforcement fleece in a single wet-on-wet process and cures to form a seamless, monolithic membrane that remain permanently elastic and is UV stable.

Dent Roofing has also been responsible for waterproofing the Bear Ravine; a much larger and more complex structure which has not been used as an animal enclosure for several years.

The design of the Bear Ravine includes a central bear pit with a raised walkway and viewing platform that also forms a partial roof to a largely open building. This is accessed by a set of concrete stairs.  There is also a viewing pier that extends out at a right angle beneath the main walkway. 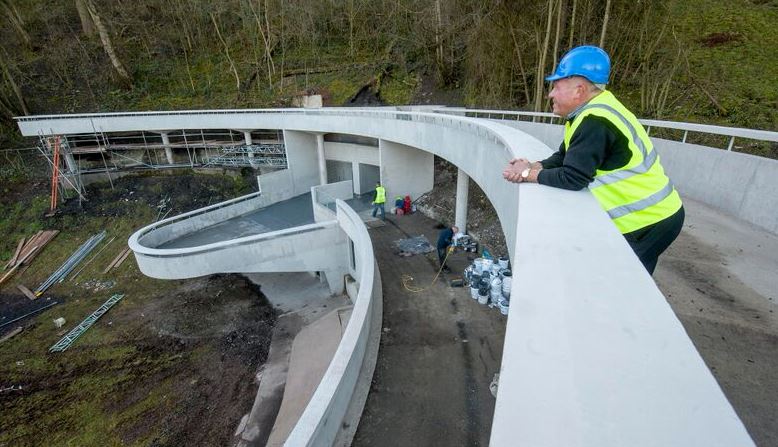 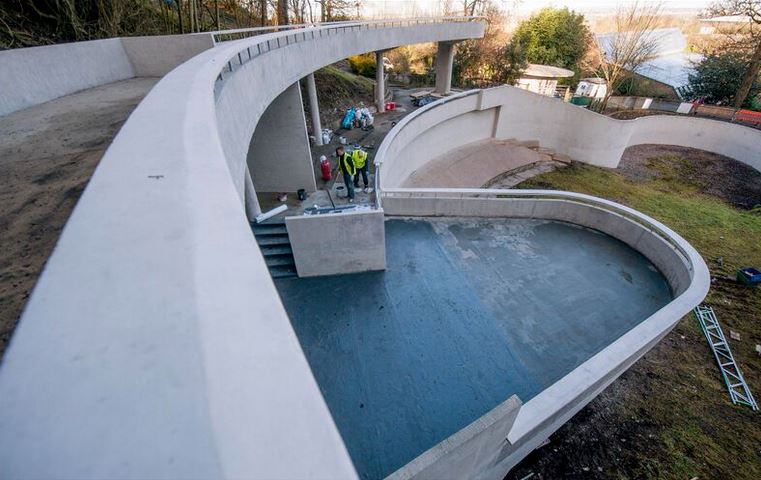 For this structure, a quartz aggregate was scattered onto the wet primer to create a key for the waterproofing membrane and Kemper System’s Kemperol 2K-PUR solvent-free system was used.

The Kemperol 2K-PUR was applied using the same methodology with resin, followed by 200g fleece and more resin, all installed in a single wet-on-wet process.

Julian Dent from Dent Roofing explains: “The curved lines that make the Bear Ravine such an iconic structure also make it a challenging waterproofing project. Fortunately, the liquid Kemperol system is ideal for following the individual contours of the concrete surface and we simply used smaller brushes to apply the resin to awkward corners.”

Once the waterproofing system to the walkway and staircases of the Bear Ravine was complete, the Dent Roofing team applied a quartz aggregate laid into the coating to create a non-slip surface. The team then moved on to the Bear Ravine’s concession stand.  They started by mixing a paste of primer and resin which was then applied around the outside edge of the roof to ensure that there was no ‘run on’ of wet resin from the roof to the walls of the concession stand when the main roof area was being waterproofed. The Kemperol 2K-PUR system was then applied in the conventional resin-fleece-resin sequence with decorative quartz aggregate used to provide the finished look and complete the project.

Julian continues: “Kemperol 2K-PUR provides a high level of waterproofing performance, and is BBA-Accredited with a 25-year service life, ensuring that the Bear Ravine is protected and preserved for the next generation just as effectively as the Tecton structures at the Zoo’s entrance.”