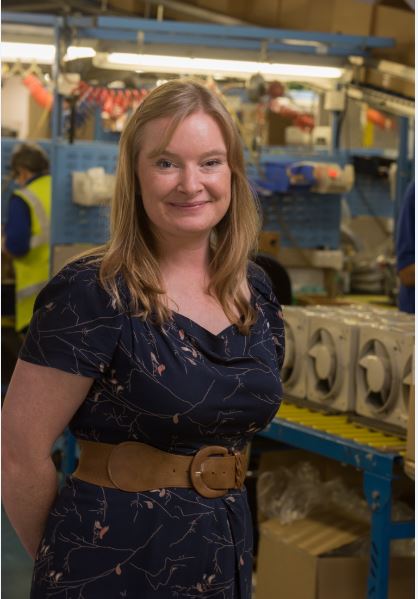 Crawley-based Vent-Axia, the leading UK ventilation manufacturer, has shared its experiences of reshoring its manufacturing from China at the latest Sussex Chamber of Commerce Manufacturing Forum. At the event, hosted by the company, other Sussex manufacturers heard how reshoring had created new jobs; resulted in investment in the local community and boosted the company’s competitive advantage.

Vent-Axia completed the reshoring of the balance of its domestic fan manufacturing, from China back to the UK, in January 2013 with the launch of three new production lines at its Crawley site. The culmination of a two-year project, the new assembly lines doubled the company’s on-site manufacturing of its residential unitary fans. The company invested over £350k in tooling for the new production lines, as well as investing in building works to incorporate the new manufacturing.

Speaking at the event Jenny Smith, Vent-Axia Marketing Manager and Graham Morrison, Vent-Axia Group Inventory Controller explained why the company decided to bring manufacturing back to the UK and how this decision had enhanced product innovation and improved customer responsiveness.

“Since completing reshoring we are able to produce our products more quickly in the UK to meet demand, significantly reducing the lead time required compared to when products were manufactured in China. We can also now produce shorter runs of specific bespoke products to meet customer needs, therefore making us more competitive and responsive in the marketplace,” said Jenny Smith.

As well as hearing about Vent-Axia’s reshoring initiative, delegates at the event were also able to tour the facilities and see for themselves how moving manufacturing back to Crawley has benefitted the company.

At the event Vent-Axia explained that another benefit of moving manufacturing back to the UK is the company no longer needs to hold high levels of stock in its warehouse to anticipate demand. This stock reduction has reduced Vent-Axia’s working capital by approximately £250k.

As well as investing in the local economy Vent-Axia’s commitment to British manufacturing has seen the company further investing in UK logistics which has helped lower the embodied energy of products by reducing carbon emissions.

On the environmental front the UK location has reduced the embodied energy in Vent-Axia’s products by lowering transport emissions. Up to 15 Tonnes of CO2 emissions is avoided each year since reshoring due to the reduction in international shipping.

Headquartered in Crawley, West Sussex and with almost 80 years as an influential industry leader, Vent-Axia continues to set the standard in controlling the flow of fresh air, its temperature, humidity and cleanliness. Each year the company supplies air management solutions for over half a million installations across the residential, commercial and industrial sectors in the UK and around the World.