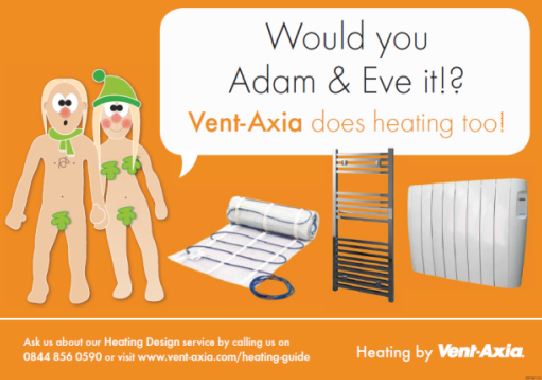 Sussex-based Vent-Axia is delighted to have been shortlisted for Marketing Initiative of the Year in the Electrical Industry Awards for its ‘Adam & Eve it’ campaign. This highly successful initiative doubled heating enquiries in the first two months and in month one, sales went up by over £30,000.

Vent-Axia has traditionally been known by electrical contractors as a ventilation company and many were unaware of their range of heating products. To counter this, an awareness marketing campaign was developed that played on cockney rhyming slang, with the simple headline being ‘Would you Adam & Eve it? Vent-Axia does heating too!’

The campaign was designed to stand out and used a range of marketing collateral such as interactive banners, till wobblers, floor stickers and giveaways. This was supported by a PR awareness campaign in the trade press, advertising and social media.

Central to the campaign was running a competition based around a fairground style pull-up banner with holes cut out where the faces of Adam and Eve would be. Electrical Wholesalers were provided with the banner so their customers could pose as Adam and Eve and enter the competition by sending in their pictures to Vent-Axia. The initiative successfully showed an increase in enquiries and quoting opportunities from branches, that otherwise wouldn’t have thought about Vent-Axia for heating.

“We are thrilled that Vent-Axia’s successful campaign has been shortlisted in these prestigious awards. We didn’t want to just put up posters in a branch – we wanted something the electricians could engage with”, explains Jenny Smith, Marketing Manager at Vent-Axia. “We therefore developed a competition based around a fairground style pull-up banner with holes cut out where the faces of Adam and Eve would be. Electricians that sent in a picture of them posing as Adam and Eve were entered into a draw to win some work wear and a designer towel rail. We also awarded the branch of the winning photos with work wear fleeces for their counter staff. This way both the contractor and wholesaler won!”

Ideal for residential or commercial applications, whether it is a bedroom or hallway, office or shop, Vent-Axia’s electric heating range can provide the solution.

Also included in Vent-Axia’s electric heating range is a series of attractive towel rails featuring high quality white or chrome finishes with ten different models, split into flat, curved and designer styles. Control is central to the range, with the series featuring an optional advanced controller offering five heat outputs. Households therefore have warm dry towels without wasting energy, bringing greater comfort to the towel user but also adding to the overall temperature and comfort of the room.

Meanwhile, Vent-Axia’s Bluethermal™ underfloor heating allows low temperature radiant heat to provide evenly distributed warmth, with accurate controls ensuring this form of heating is more energy efficient than ever. And with the thermal output being 2-3 °C lower than using a convection based system, savings of 5-10% of the running cost are realised. The system includes a thermostat controller that monitors both the floor and air temperature so customers gain maximum control over their environment by allowing them to set the thermostat at either the ideal floor or air temperature.

Attended by the biggest names in the electrical industry, the Electrical Industry Awards ceremony will take place at The Royal Garden Hotel, Kensington on Thursday October the 29th. For further details and information on how to book tickets please visit www.electricaltimes.co.uk/awards