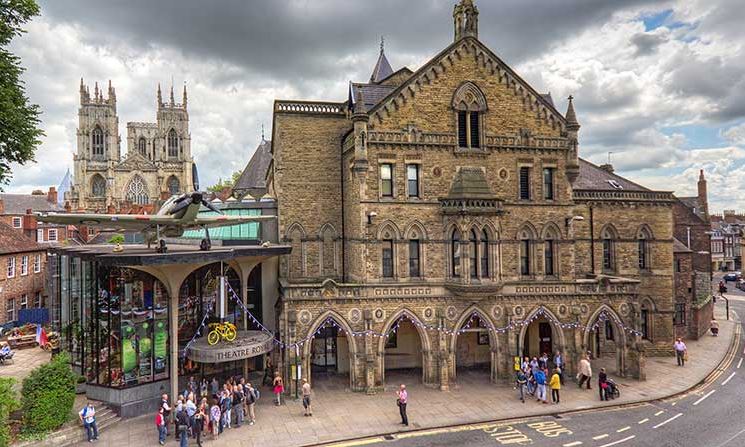 Standing in the heart of the city for 270 years, the theatre is a patchwork of many periods, from Roman to Georgian and Victorian fused with award winning 1960s poured concrete design. The York Conservation Trust took ownership of the building in January 2015, pledging to make huge improvements to the theatre’s facilities. Transforming the building to make it more sustainable was high on the agenda, as well as protecting its heritage. William Birch and Sons Ltd were awarded the contract for the re-development and Briggs Amasco Leeds tasked with refurbishing the flat roofs. 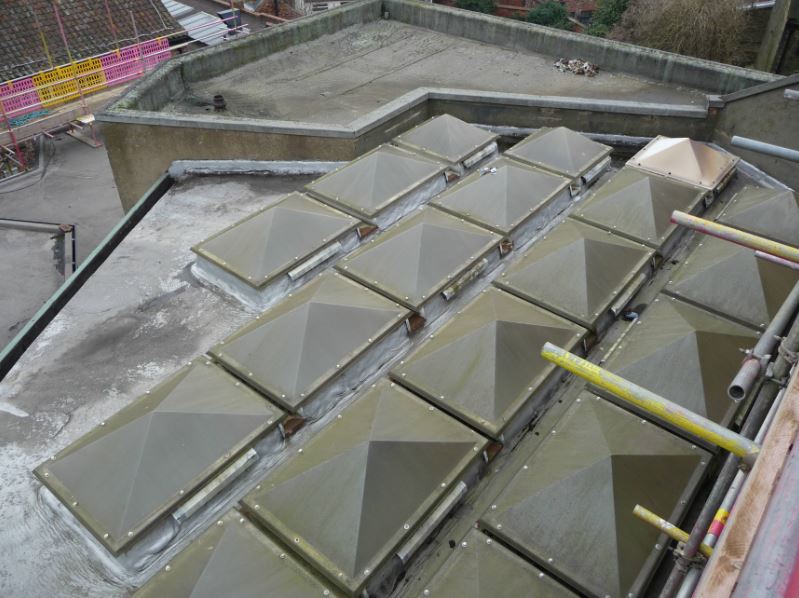 The area that presented the biggest challenge for Briggs Amasco was the flat roof above the atrium of the theatre, a Grade II* Listed 1967 extension to the building designed by renowned modernist architect, Patrick Gwynne. This roof was of particular concern as it had an original 50 year old asphalt covering, which had clearly come to the end of its life.

Despite the roof being only 100sq m in size, the area had an incredible 31 roof lights to replace and work around. With so many roof lights in a small space, the detailing lent itself to a liquid product, and Sika Liquid Plastics worked alongside Briggs Amasco and building surveyors, W R Dunn, to make sure the roofing solution would be in keeping with the buildings heritage, while offering a stunning new feature in the atrium roof. Sika Liquid Plastics sent a huge sample to the Trust, which included the full roof light and surround, to make sure that the client was happy with the solution. 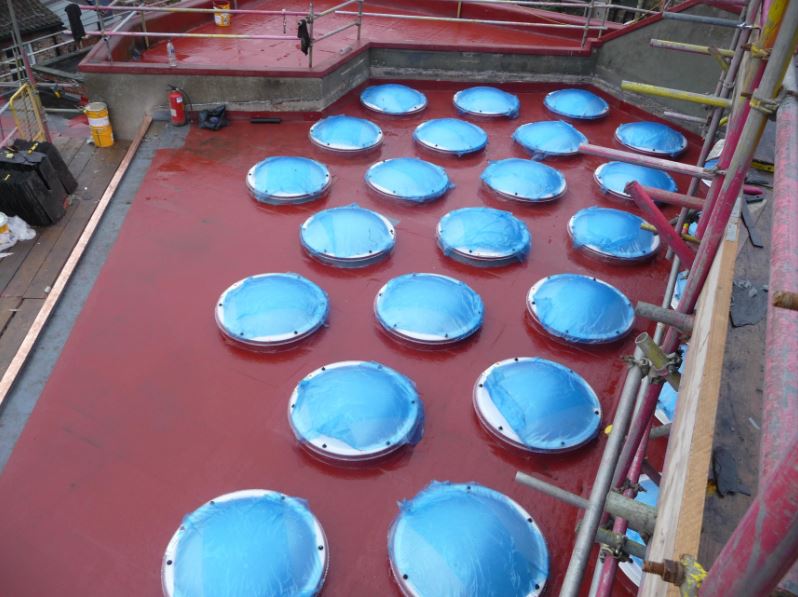 The complexity of this refurbishment became even more apparent with the results of the initial survey. It was revealed that an original GRP roof deck from 1967 was hidden under the asphalt – very experimental for its time.

The original designs in the RIBA archive showed an intention for glass dome roof lights, which would have let light flood into the atrium below. However, the GRP deck must have failed, as it was quickly covered over by a timber roof deck and asphalt, with continuous metal roof lights with Georgian-style wired glass. Sadly, these roof lights only acted as a dust trap, becoming discoloured and offering very little light into the atrium.

Work kicked off in September 2015 to completely strip the roof, taking away the very unusual double build up and existing roof lights. A warm built up roof was installed, covered with Decothane Delta 25 – a thermal upgrade that tied in with clients requirements for improved sustainability.

Thanks to the refurbishment, the original design intention could be realised, with new state of the art Decolight Dome and Pyramid polycarbonate roof lights installed – making a massive difference to the light in the atrium below. Coloured-changing LED lighting around the inside of the roof lights also add a wonderful feature within the building. 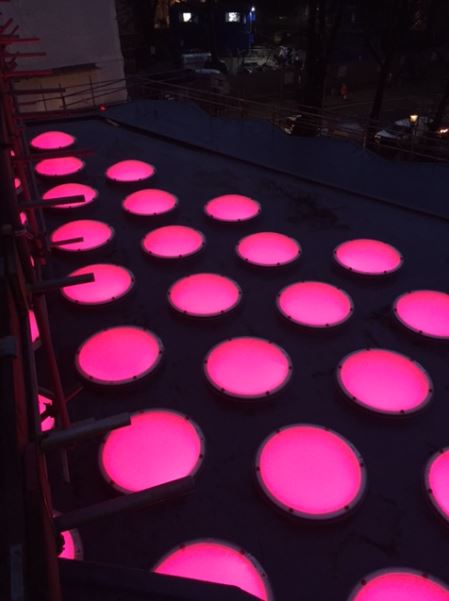 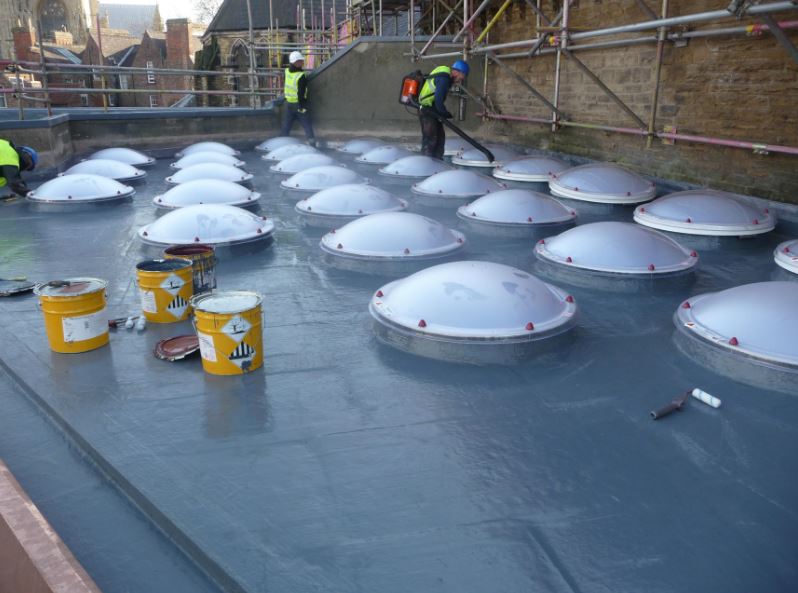 Working to refurbish a roof on a building in the heart of York posed plenty of challenges. Owing to site conditions and proximity to the public, all deliveries had to be made to Briggs Amasco’s premises in Leeds and were then brought onto site on a ‘just in time’ basis. There were also many challenging details and interfaces that had to be overcome. Insulation had to be cut between the roof lights to be installed, the complex detailing was tricky but the liquid applied product made the job much easier.

The refurbishment meant that the original 1967 design intention for letting light flood into the top on the atrium, welcoming people to the building, could be realised.

Guy Bowyer, Architect at York Conservation Trust said: “Sika have been excellent, they have had a positive approach from the start assisting us from initial concept stage right through to completion, we could not have asked for more. We also wanted a warranty for both the roof covering and roof lights, Sika were able to provide a 25 year warranty which is outstanding.”

“We are delighted with the completed product, the workmanship by Briggs is of high quality and the finished appearance of the roof lights from the inside is brilliant. These will look fantastic when illuminated at night.”

The theatre is to re-open in spring 2016, with a new roof, an extended and remodelled front-of-house area, a refurbished and redecorated main auditorium and major improvements to access and environmental impact. York Theatre Royal will be a building fit for a 21st-century audience that will be sustainable and able to thrive into the future.

Decothane is available in the UK from Sika Liquid Plastics. For further information visit http://gbr.liquidplastics.sika.com or call the Enquiry Line on 0800 112 3826.