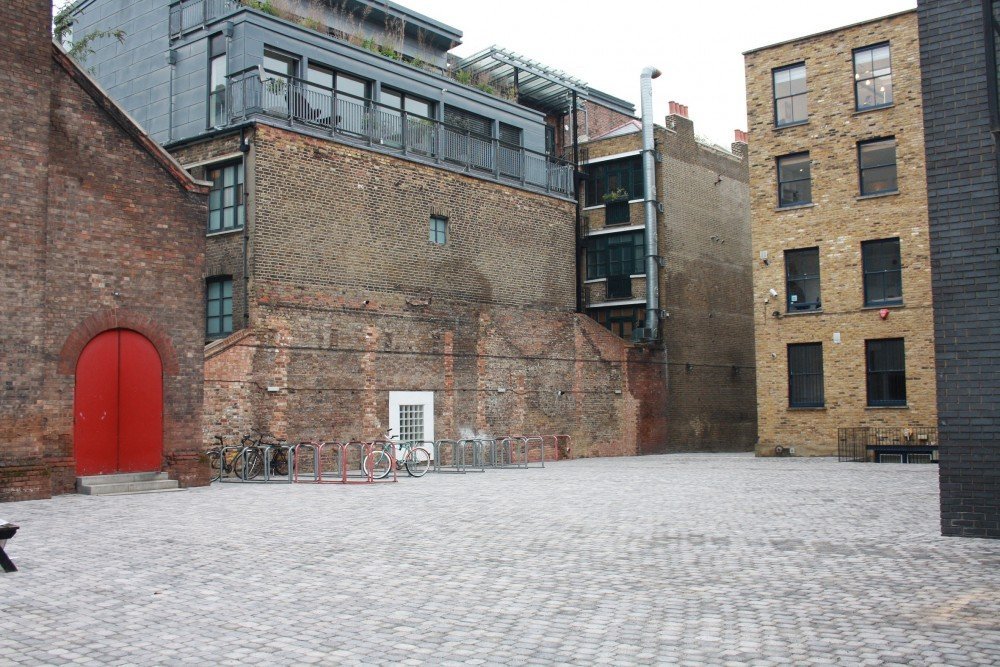 Brett Landscaping recently supplied over 700m2 of paving to installers Marshall K Paving Contractors Ltd for installation at the National Centre for Circus Arts in London.

The centre, which is based within a former Victorian power station in Hoxton Square, is of one Europe’s leading circus skill educators and was the training ground for performers involved in the 2012 Paralympic and Olympic opening ceremonies.  In addition, the impressive building is a sought after venue and offers a unique selection of city spaces for event hire.

‘One area of the building, the Courtyard, was earmarked for renovation, but due to a seven-day-a-week timetable and the area being in continual use, this had to be done within a very tight timeframe.’

The Operations Team at the National Centre, headed by Jon, investigated potential solutions at the 2015 London Home Building & Developer Show held at ExCeL in September, and discovered that Brett Landscaping, with its strong focus on customer relationships, could offer more than just the essential materials.

Brett was subsequently considered, alongside other suppliers and contractors, as part of a tendering process to select the right partner for the paving scheme.  He explains:

“After comparing a number of different paving products, all of which had their merits, the range of options we had from Brett faired strongly and provided us with an excellent starting point for the project. In addition, the service we experienced from the team was very thorough, which made our experience more than about simply ‘picking the best brick’, or ‘nicest material’, not just with Brett, but with the subcontractor too.”

“Aesthetics were a key consideration. There aren’t many Victorian power stations in the heart of London that are still standing, let alone operating with a new purpose, so we felt it imperative to re-lay and improve the Courtyard area of the circus centre as sympathetically as possible so as to do justice to the building’s impressive looks.

Jon goes on to explain how 700 m2 of Brett Aura block paving in Silver Fleck was selected to create an extremely effective Courtyard visual; however the building’s central Hoxton Square location meant more than just the right materials were needed for the job.

The area prohibits the use of articulated lorries in fulfilling deliveries, a complication which meant both supplier and installer needed the logistical capabilities to work with restricted motorised equipment, as well as the aptitude to turn the project around within two weeks, in time for a scheduled acrobatic symposium.

“We recommended three of our BAIs to Jon Dix and his team, enabling them to receive quotes and completed work examples from each, alongside quotes from other independent contractors.”

Based on Brett Landscaping’s recommendation, installer, Marshall K Paving of Cricklewood, was selected as the most appropriate choice, and since appointment, has worked within impressive time constraints to complete what the company’s Director, Kevin Canning, has described as a ‘fantastic project in a challenging location’.  He explains:

“Owing to the vehicular constraints in the Hoxton Square area, Brett arranged special delivery of materials to the Deben Buildbase in New Southgate, from which 18 tonne flatbed deliveries to the circus centre site were made, with appropriate crane off-load at the Hoxton Square end.  This logistical process proved successful, and avoided the expensive option of closing roads around the Shoreditch area.

“Our installation team then worked to complete the Courtyard in five days, over the course of a two week time period, despite adverse weather conditions and complex parking restrictions.

“The finished result looks extremely effective and we’re delighted to have completed the project in advance of the acrobatic symposium event.”

“Being part of the BAI scheme improves standards across the board. Brett only selects hard landscaping contractors who are able to install materials to the approved British Standard, and because Brett regularly assesses our work, the benchmark remains high.

Brett supports its approved installers too, not only in helping to procure business, but to purchase equipment and publicise their services.”

Now completed, the Courtyard at the National Centre for Circus Arts is being put to use, and has a busy itinerary of event bookings to look forward to.

Jon Dix concludes: “We’re delighted with the finished Courtyard. Our objective was to revive the area with re-laid setts that were sympathetic and appropriate to the aesthetic of the building.  By working with Brett Landscaping, and Marshall K Paving, we have achieved exactly that.”