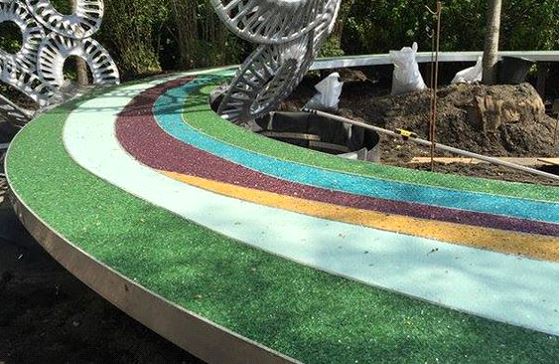 The Project
“Forever Freefolk” the silver medal winning garden at the 2016 Chelsea Flower Show was designed by Rosy Hardy and sponsored by Brewin Dolphin, the main contractor was Bowles Wyer. The garden is based on Freefolk, Hampshire and the high security paper-making industry supported by the River Test located near the designer’s nursery.
.
Ronacrete Approved Contractor, Graveltech were selected as installers of the RonaDeck Resin Bound Surfacing on the raised pathway that wound itself through the garden.
“I wanted a path that sparkled picking up the colours of my planting. The glass resin paving fitted the bill completely, looking great in bright sunlight and duller conditions.” Rosy Hardy, Garden Designer

Rosy Hardy’s nursery is situated on chalk downland close to the River Test which is a typical example of a chalk stream. The chalk provides an excellent filter for the water so that it is extremely pure. For this reason the water in the River Test was used by the Huguenots, when they moved to the area in the 1730s, to watermark banknotes. The Huguenots also realised the importance of preventing forgery and so ran a silver thread through the bank note, this is reflected in the garden by the stream running through it and by the resin bound pathway that follows the stream.

Visitors are led along the path through a dry chalk stream bed towards its source. The route takes them through shady, dry chalk, grassland and damp areas with appropriate plants for each landscape. 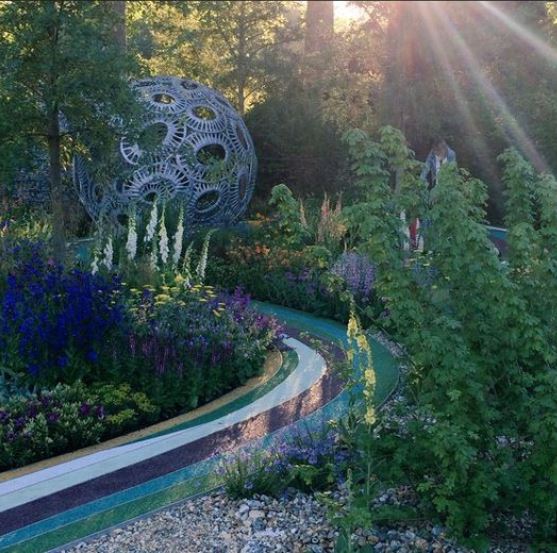 Another idea came from a picture of a fishing hut floating above the River Test, this resulted in the creation of the floating pathway running through the garden. A spherical aluminium sculpture provides the focal point of the garden and hovers above the resin bound pathway. This was inspired by how the chalk beds were formed. Coccospheres are the calcium carbonate skeletons of plankton that washed up on the seabed and form the main constituent of chalk. So a coccosphere was sculpted from aluminium and placed in the garden.

Of the 160.000 visitors attending this great British summer event, a great percentage will have visited this award winning garden and stood on the resin bound pathway to admire not only the surrounding colours but those beneath their feet.