The University of Birmingham is one of the UK’s leading Russell Group universities, featuring in the top 15 of the University League Tables 2017.

The leafy Edgbaston campus is undergoing a series of major building projects and Hunter Douglas, the international leader in architectural building products, played its role in the refurbishment of a lecture theatre in the Avon Room.

What made this scheme stand out was that the panels, which were manufactured from engineered solid wood (ESW), differed from the usual ceiling system.

These were produced with 9mm “dummy” circular perforations, which allowed the panels to be invisibly fixed to the suspension system, says David Harris, General Manager of Hunter Douglas Architectural. “The ‘wings’ within the central ceiling are a very unusual feature and they also incorporate some linear light fittings,” he said. 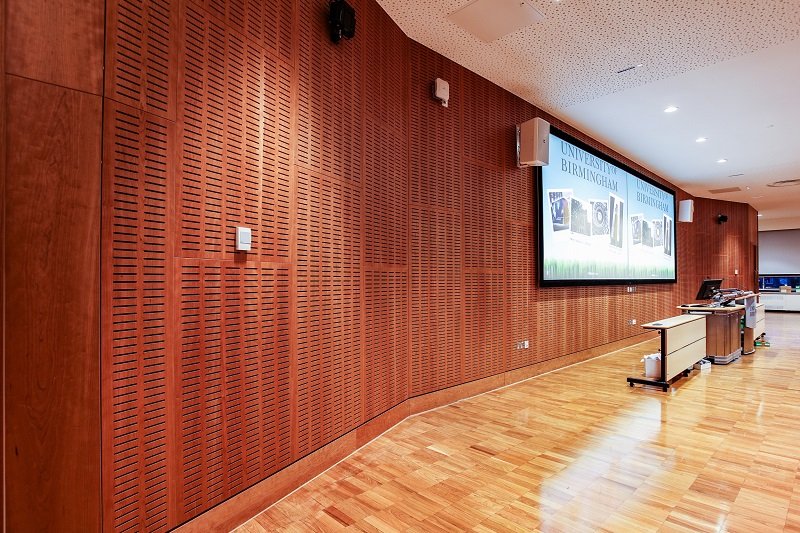 “We worked closely with the ceiling contractor, Elmsmere Engineering, as the installation of both the ceiling and wall panelling was very challenging and needed a great deal of care to ensure a perfect finish.

“The project demonstrates clearly that Hunter Douglas has the technical expertise to create tailored solutions for architects and specifiers, ensuring that every finished look is fresh and new.”

Hunter Douglas also provided 158m2 of wall panels for the front and rear of the theatre, made of the same MDF core with a real Cherry veneer.

Approximately 105m2 of the wall panels were non perforated, while the remaining 53m2 were produced with 7mm x 97mm slot pattern that helps to maximise acoustic absorption.

The panels were produced in a variety of dimensions, from 650mm x 800mm to 2240mm x 740mm, and were installed using invisible fixing clips around the perimeter of the panels. They also have a small bevel where they meet, offering a neat design detail.

Hunter Douglas also supplied 15 240v motorised blinds to the two side elevations of the lecture room. Each pewter-coloured blind is made from Star fabric, which has a 3% openness factor, and measures approximately 2.5m wide with a 2.5m drop.