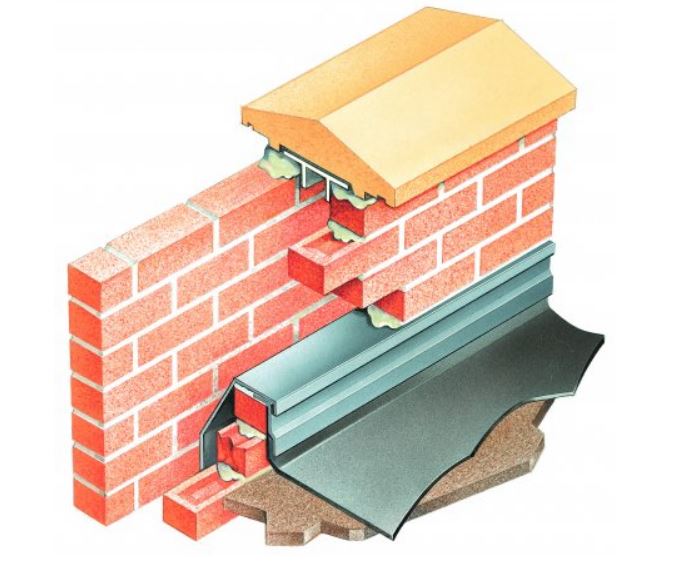 Parapet cavity walls behave differently because both faces are exposed. The prevailing document dealing with the design of masonry structures and sections is PD6697 and it states the protective DPC tray within a cavity parapet should step down at least 150mm towards the inner or outer part of the wall (PD 6697 – 6.2.7.7.8). This is incorrect. The protective arrangement should step outwardly only, and there are a number of reasons why:

The DPC shown in PD6697 is built into both skins of the parapet to hold it to shape. When the parapet wall becomes saturated with rain and in extremes of heat and cold, expansion of the masonry occurs. When this takes place the DPC bedding course in a parapet offers the least line of resistance and acts as a slip-plane, so movement at DPC level in the outer and inner skins occurs. This prejudices the parapet structural stability. Where the amount of expansion is not fully compensated by contraction, progressive movement over the years will occur – mainly as a result of ratcheting. (Where the expansion movement is not fully matched by the retraction movement and masonry above and below the DPC progressively moves out of alignment). This is easily first identified by witness lines and eventually by horizontal cracking along those courses in which the parapet DPC has been supported. (picture 1. showing out of alignment masonry – ratcheting)

If the DPC tray within the wall steps inwardly (as depicted in PD 6697 and BS 8215) the wall is susceptible to wind-driven rain entering the slip-plane cracks and flowing on the underside of the inward step after which dampness manifests on the ‘inner’ skin under roof level. A simple case of wet under-tracking. 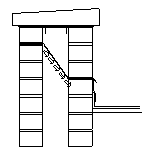 Whilst an outward stepping arrangement overcomes the under-tracking problem and is logical in terms of functionality, it shares (with its inward-stepping alternative) the same structural problem. The highest and most exposed section of the parapet wall is separated from the masonry below the DPC. It is all resting on a slip-plane – not the ideal structural arrangement for a wall projecting above the roof of a building.

There is an alternative approach. The Type P parapet cavitray is a self-supporting DPC tray that is pre-shaped and requires building into one skin only. The opposite skin remains uninterrupted and consequently the solidity of the masonry is maintained and the structural integrity of the wall build is considerably improved. And because the arrangement steps outwardly, the under- tracking possibility does not arise.

Type P cavitrays are available to suit both straight and curved walls. Interestingly curved parapets are can suffer accentuated movement/ratcheting problems especially if the curve is between two resilient structural points. Thrust direction can then move at 90º to the arc and a radius ‘eyebrow’ ledge can result. Such movement is commonly accompanied with coping dislodgement where coping pinching occurs. The benefit of the Type P cavitray not puncturing or separating the outer skin minimizes this behavior. The tray also incorporates a protective lip on the opposite side where the flashing emerges, and this lip provides shelter of the bedding course from direct wind-driven rain.

A spokesman for Cavity Trays of Yeovil explained: ‘The original British Standard showed an inward stepping DPC rather than an outward one. Parapet walls built to that detail initially functioned correctly. But it takes few years before parapet cracking is apparent, and eventually water would permeate the outer skin along the dpc bedding joint and track inwardly on the underside of that inward stepping DPC. As soon as that tracking reached the inner skin, the damp problem became visible.

Our approach was the opposite. We designed an outward stepping arrangement – the concept subsequently adopted within numerous revised Standards. But as well as preformed and outward-stepping, the tray improves the structural continuity by eliminating a problematic DPC slip plane in the outer skin’.