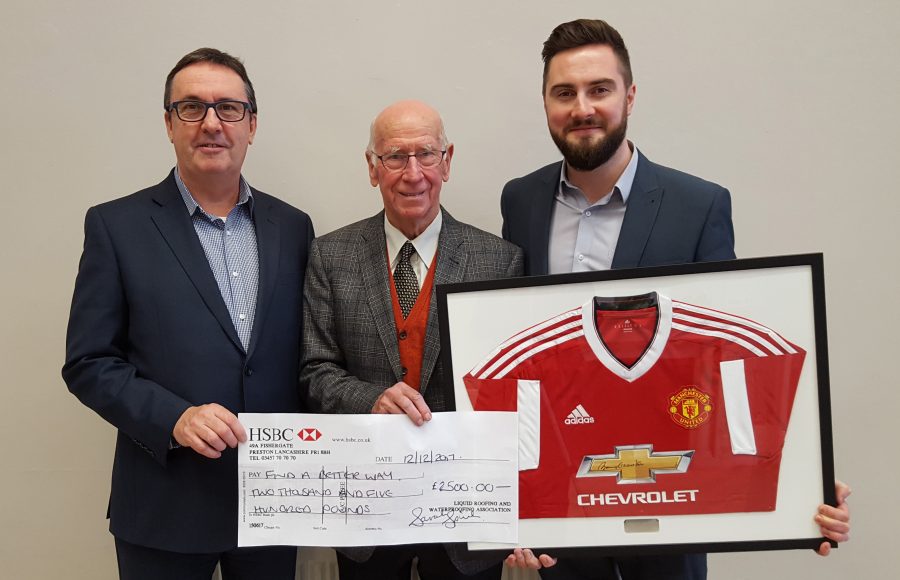 The Liquid Roofing and Waterproofing Association (LRWA) has donated £2,500 to a charity set up by Sir Bobby Charlton, ‘ Find A Better Way ’.

The Cheshire-based charity helps civilian landmine blast survivors, their families and communities to ‘heal and rebuild their lives’.

As the association’s chosen charity of the year, Cliff Weston, LRWA chairman, and David Broom, director of an LRWA manufacturer member Moy Materials, visited the Find A Better Way headquarters in Knutsford, Cheshire, to present a cheque to Sir Bobby Charlton himself.Setting up the charity in 2011, Sir Bobby’s determination to help children and families forced to live among explosive after-effects of war has provided much-needed humanitarian assistance in landmine afflicted areas. Find A Better Way also funds mine risk education to help children avoid landmines and funds the development of new technology to help civilians recover from blast trauma and enjoy a better quality of life.

The majority of donations were raised at the recent LRWA Awards and Gala (November 2017), where a Manchester United shirt signed by Sir Bobby Charlton was auctioned. David Broom of Moy Materials’ [pictured] generous bid won the signed shirt, and he received his prize during the cheque presentation.

Commenting on the donation, Sir Bobby Charlton said: “A huge thank you to the LRWA for supporting Find A Better Way. I was inspired to set the charity up during a visit to Cambodia in 2008, where I saw first-hand the devastating effects of landmines and other explosive remnants of war on families and children decades after the fighting there had stopped. This kind donation will go a long way towards supporting our work helping landmine blast survivors and their communities to heal and rebuild.”

He said: “We are delighted to donate to a cause which helps towards the plight of landmine survivors around the world. Launching our fundraising efforts at the inaugural LRWA Awards and Gala – held at the iconic Hotel Football venue adjacent to the Manchester United Football ground – we felt was extremely fitting as Sir Bobby Charlton, who celebrated his 80th birthday in October, being arguably the most talented British footballer of all time, played for both Manchester United and England.

“Not only that, as a country I think we are ignorant to the sectarian warfare that has a devastating impact on many people’s lives across the world. To help raise awareness of a cause which supports victims and their families affected by the industrial scale of these landmines can only be a good thing.”

Continued Cliff: “This is the second year the LRWA has chosen to donate to a dedicated charity as we recognise the privileged position we are in the UK, and as a sector, experiencing and enjoying continued growth and prosperity, it seemed only right to give something back to such a worthy cause, no matter how big or small the donation, which might make a difference to people in a less privileged position.

“We hope our donation will help Find A Better Way continue to support vulnerable communities living in mine-affected areas.”

For more information about the charity and its work, visit www.findabetterway.org.uk