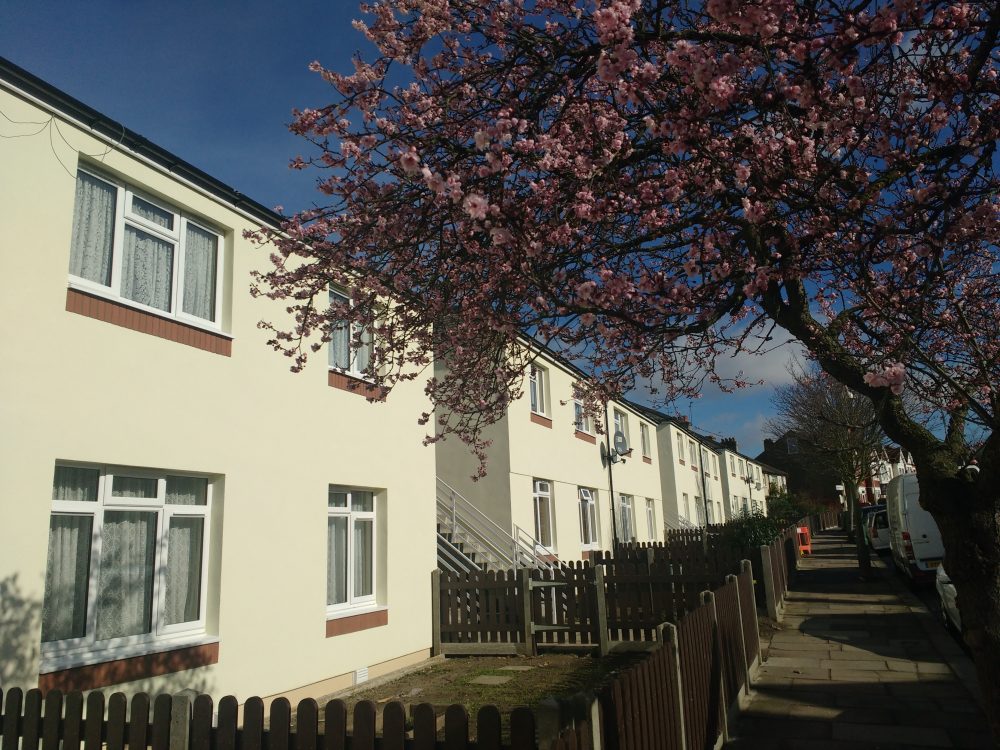 The intelligent Lo-Carbon Revive is a filter-less unitary fan designed to meet the specific needs of social housing that boasts powerful, quiet and efficient ventilation.

At Bramley Road Revive fans were fitted in conjunction with external wall insulation to replace old existing fans in properties with a long history of condensation problems and mould spores. The Revive fans were specified as a ventilation solution since the combination of higher insulation values with constant trickle ventilation is expected to eliminate these problems. Plus the Revive’s datalogger was an attractive feature since it allows the fan’s usage to be tracked to ensure it is used as intended. Easy install through a simple LED display, which makes the fan ideal for the majority of applications, was also an added benefit.

“Lo-Carbon Revive was selected primarily because near silent operation was considered to be a key consideration for a fan which would be running all the time” said Richard Morley, Building Surveyor, Ealing Council. “Experience tells us that if the fan can be heard during the night, residents will endeavour to disable it. Being a pilot scheme we also had a preference for selecting products from market-leading suppliers with the anticipation of quality manufactured products and good after sales service.”

Condensation and mould is directly linked to poor indoor air quality (IAQ) and the Bramley Road properties had a history of these problems. Revive’s innovative Multi-Vortex™ technology tackles these issues by powerfully, but quietly removing moisture and stale air to ensure good IAQ and comfort for tenants while being quick and easy to install, low maintenance and reliable. Highly versatile the Revive offers a choice of run speeds for multiple installation options and can be ducted or through the wall, making specification easy. Plus Revive is low maintenance since its market-leading Multi-Vortex™ technology does not require a filter, while the highly sculpted interior actively repels dust, avoiding clogging, thus helping to avoid call backs. Revive also boasts reliability backed by up to seven years’ warranty meaning councils can rest easy when specifying this product.Why settle for LED spots when you can have stripes!

Meanwhile, installers at Bramley Road needed to be able to fit the 22 fans as swiftly and simply as possible. Featuring Smart Sense™ intelligent technology Revive is quick and easy to install with the fan  a simple alpha numeric LED display which is clear and easy to read and a three-button menu for commissioning and data gathering. Smart Sense™ technology even tells the LED display which orientation featuring to use depending on whether it is wall or ceiling mounted. All of which saved time on site and reduced installation complications.

Ealing Council is able to monitor the energy efficiency of the fans via Revive’s Smart Sense™ technology which provides real-time data via an intuitive interface. This enables them to reassure their residents of the low-running costs. Meanwhile, nuisance tripping is another reason residents avoid using fans, Revive’s Smart Sense™ therefore features an ambient response humidistat to avoid this, thus increasing resident acceptability.

Revive’s Smart Sense™ also includes a datalogger which tracks how many days a fan has been running to ensure it is used as intended. Ealing Council is able to use the datalogger to track energy use and interrogate the fan on how many days a fan has been on humidity boost mode, pull cord boost mode, or trickle. This information helps them build a profile of resident activity and aids the council in investigating humidity problems, allowing them to work with Bramley Road residents to ensure a healthy indoor environment.

To see the Revive in action visit: https://www.youtube.com/watch?v=VNYC1QC_F8s