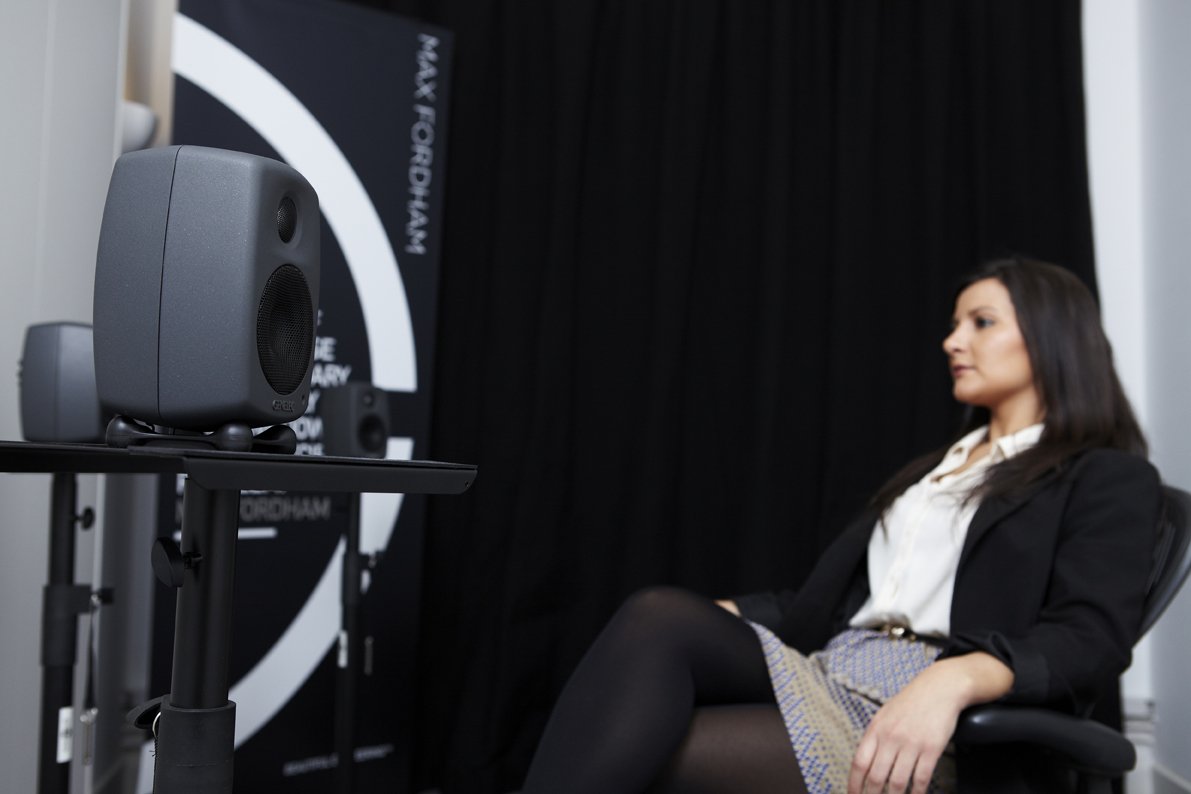 – Sitting in the space, clients experience an ‘audio illustration’ of what a building sounds like.

– The SoundSpace offers the opportunity to compare the impact of various acoustic designs, in an easier and more demonstrable way than abstract concepts such as decibels.

It is essential for engineers and architects to demonstrate how a project will look to a client before building gets underway. As well as being an intrinsic part of the design process, technology makes it possible to produce photo-realistic images and to-scale models so that the professionals can articulate their visions and the reasons behind them.

Showing a client how a space might sound is less common, and often deprioritised in the process. However, the sound of a space has a visceral impact on its users. Some buildings, of course, have specific functional sound requirements, such as theatres, concert halls and event spaces, but regardless of its use, the internal acoustics of a building can have varying implications. Put simply, when acoustic design goes wrong, it can dramatically reduce the enjoyment or value of a building.

Max Fordham have developed a way of demonstrating the impact of acoustic design to potential and existing clients. SoundSpace, located at their offices in Camden, is a room which puts the listener at the centre of a sphere of loudspeakers. Designed specifically so that the listener will be directly in the middle of the sphere, the acoustics team are able to play sound files through fourteen loudspeakers, the combination of which gives an audio illustration, or auralization, of an existing or prospective space.

When the engineers are working on a building that has already been built, they can extract the original sounds from the space itself. A three-dimensional microphone is used which, in layman’s terms, captures the location of sounds. The data captured is encoded into four components, corresponding to the X, Y and Z axis and an omnidirectional component labelled W, which are then decoded to the loudspeakers to produce an audio experience akin to what would happen in a particular space.

When the SoundSpace is being used as a tool to demonstrate the acoustic impact on a building yet to be built, the sounds are produced using a computational model of the prospective space. With the same method as light design, calculations are made based upon reverberation, echoes and so on, taking into consideration the materials and dimensions of a room. From those calculations, sounds are produced to demonstrate the impact of varying degrees of sound treatment in the room or building.

The sounds themselves can be experienced in several different ways, with configurations including use of a virtual reality headset, projections of images of the room onto a screen, combined with sounds from a headset, or using the loud speaker system. The combinations aim to take the acoustics from the abstract, and locate the experience in the desired space, while allowing the engineers to tailor the experience to the client and illustrate the differences between designs.

The ability to envisage how different acoustic treatments will impact the sound of a space is crucial in the process of designing a building, since acoustics have knock on effects for users, whether it be in residential spaces, offices, or public use buildings. However, in the nature of Max Fordham’s sensitive approach, the design team presents both absolutes and relative changes.

Pedro Novo, Acoustics Engineer at Max Fordham explained: ‘While the auralization process presents absolute quantities such as noise levels or reverberation times, we put a special focus on presenting relative changes such as those regarding the sound character of a space, which is associated with the more qualitative aspects of acoustics. We are able to say “if you don’t have any acoustic treatment, it will sound like this, and if you do, it will sound like this”, and it’s the difference between the two that we’re trying to illustrate. All software like this has its limitations, and of course we cannot profess to know exactly how the acoustics in any given space will sound like, but we can give a good simulation. Often our clients haven’t considered the detail of aspects such as sound, so allowing them to experience it for themselves can be insightful and as well as, we hope, entertaining.”