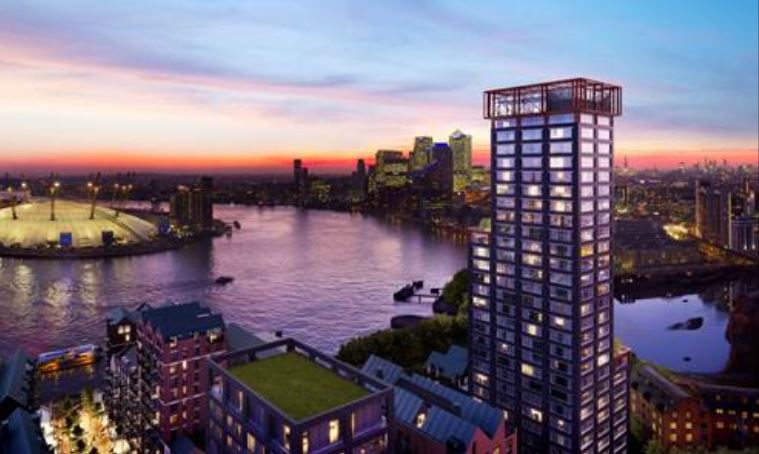 Leading London property developer Ballymore has announced the launch of Douglass Tower at their Goodluck Hope development on Leamouth Peninsula. Standing at the gateway to London on the River Thames, Douglass Tower, 30 storeys high will transform the skyline of east London, bringing new heights to the area’s premier waterside address.

Douglass Tower is a testament to the ground-breaking work of the civil engineer and prolific lighthouse designer Sir James Douglass, whose designs came to life along the banks of the River Thames. In homage to Douglass’s 19th Century innovation, Douglass Tower will be a modern-day beacon of ingenuity that builds upon the culture and creativity of London City Island and nearby Trinity Buoy Wharf.

Designed by architects Allies and Morrison, Douglass Tower shares Goodluck Hope’s industrial aesthetic which is unique in a building of such height with bold lines and colours complementing the chic modern interiors of its apartments. The design approach makes exceptional use of space and maximises the abundance of natural light for each new home. Innovation is central to Ballymore’s creative ethos and is reflected by the flexible division of interior space throughout the Tower’s 1, 2 and 3 bedroom apartments, such that custom glass and metal panels can be moved to form contemporary Winter Gardens. Tailored to residents’ unique lifestyles, these Winter Gardens can be closed off to form a study space, a discrete area for dining and entertaining, or simply to take advantage of the light and open sky all year round.

On Saturday 8th September, a selection of these new apartments at Douglass Tower will be released to the open market. A number of suites, 1 bed, 2 bed and 3 bed river apartments and lofts with views over the river and city will be available for purchase, with prices starting from £395,000.

At the highpoint of Douglass Tower is The Lantern Room, a shared work-life space fit for the modern age. At its heart is a purpose-built flexible workspace where residents can work, create and collaborate with a breath-taking panorama of London as its backdrop. The unique facility also provides residents with exclusive access to an alfresco viewing platform, simulating a bird’s eye view of Leamouth Peninsula and beyond.

The Lantern Room forms part of The 1595 Club, Goodluck Hope’s globally inspired amenities. These include a 24 hour concierge, a 25 metre swimming pool (The Waterhouse), Scandinavian style steam room (The Steam House), fully equipped gym with studios and weight room (The Sweat House) and business centre (The Workhouse). Entertainment options include a private cinema (The Picture House) and restaurant with panoramic river views across the capital (The Spice House).  If that array of private club facilities weren’t enough, residents will also be able to take advantage of the facilities nearby at London City Island which include an outdoor swimming pool, resident’s club and The Grocer – the island’s very own Italian deli and restaurant.

Goodluck Hope is a new riverside neighbourhood comprising of 804 homes located directly on the River Thames at the historic Leamouth Peninsula. Surrounded by water on three sides, the development is defined by its rich maritime heritage and cultural history. Situated adjacent to London City Island, Goodluck Hope is Ballymore’s latest east London success story, an extension of a strong footprint which has already delivered some of the most ambitious regeneration schemes in the area. On the weekend of Saturday 22nd September Goodluck Hope is joint-hosting Unity Arts Festival, a celebration of creativity on Leamouth Peninsula. The festival brings together Goodluck Hope with nearby London City Island and Trinity Buoy Wharf for the very first time to showcase some of the most innovative exhibitions, installations and workshops ever seen in the capital. Visit www.unityartsfestival.com for more information and a full events programme.

Commenting on the launch of Douglass Tower, John Mulryan, Group Managing Director of Ballymore, said: “It gives me great pleasure to announce the launch of Douglass Tower. The building is a landmark feat of design and will transform Goodluck Hope in line with our work at London City Island. Ballymore is committed to preserving the unique heritage of all our development projects and we are excited to welcome new residents who value the cultural environment of the area”.