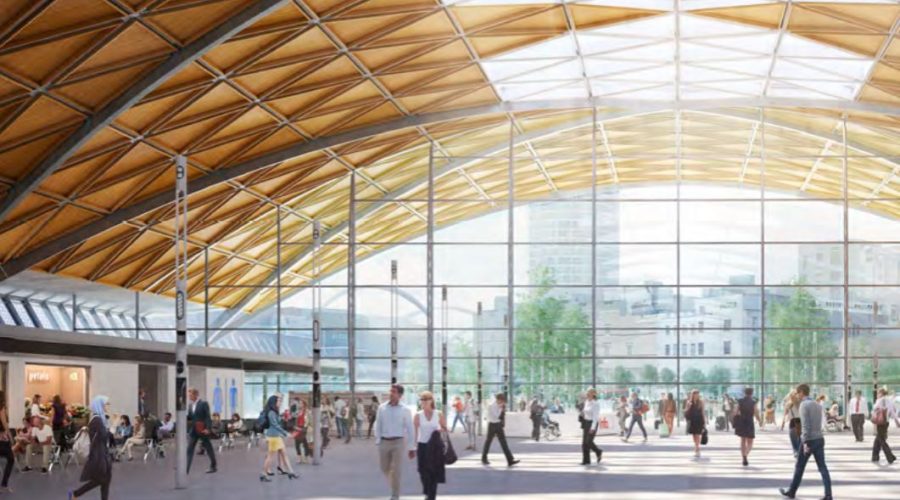 HS2 has revealed its vision for a new station at Curzon Street, Birmingham with a design by WSP, Grimshaw, Glenn Howells Architects and landscape architecture by Grant Associates.

The city centre station is one of two new stations planned by HS2 for the Midlands, the second will be in Solihull with a design team led by Arup.

Images of the two stations have been revealed this month at Birmingham Library in the first of a series of public engagement events during October, which give people the opportunity to see the new designs and give feedback. 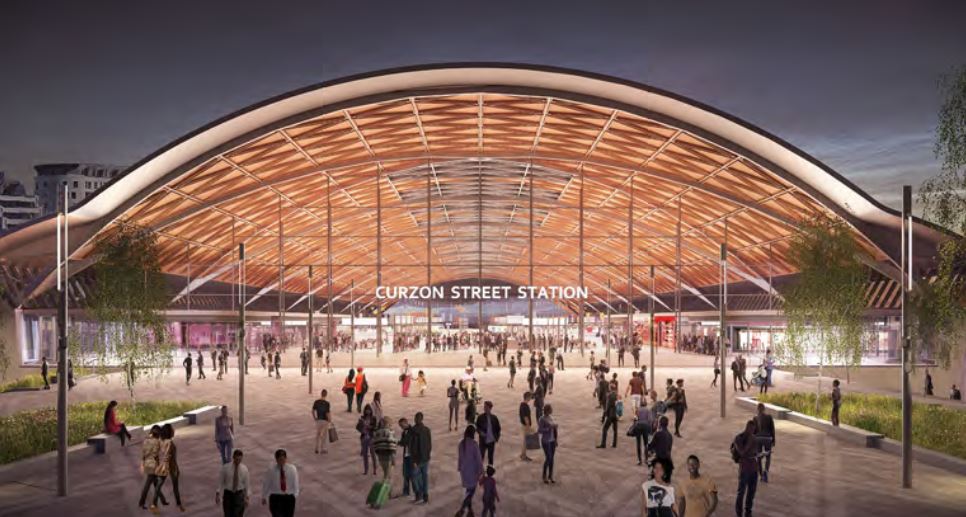 Curzon Street Station will be the first brand new intercity station built in Britain since the 19th century, creating a new landmark for Birmingham and boosting opportunities for regeneration in the city.

Due to open in 2026, the new station will offer seven high speed platforms to rail passengers, along with significant new public spaces around the new station.

The station, which will be located next to the original 1838 Curzon Street Station, will be fully integrated into an extended tram network, as well as offering pedestrian, cycle, taxi, bus and conventional rail connections to the rest of the city and the wider West Midlands.

HS2 has a set of key design ambitions based around People, Time and Place which was the starting point for the design of the urban realm at Curzon Street and will include four key areas as detailed below:

·         Station Square is the most significant new public space, located in front of the station it gives a sense of arrival into Birmingham. Visible to rail passengers arriving at the city, it provides a spacious, welcoming area to people and provides easy links into the city centre and Digbeth.

·         Curzon Promenade provides views of Old Curzon Street Station and complements the setting of Eastside City Park. It provides an active and interesting space to be in as well as linking to other travel amenities.

·         Curzon Street provides a flexible lawn space, providing an extension of Eastside City Park and links into wider plans for the future development of the area.

Each of these public spaces will incorporate cycle lanes and cycle parks as well as clear pedestrian routes, trees, planting and gardens. They form a part of HS2’s wider aim of delivering a ‘green corridor’ across the whole route, creating new ecological habitats, community and amenity spaces to help integrate the new line and stations into the surrounding landscape and environment.

Chris Grayling MP, Secretary of State for Transport, and Andy Street, Mayor of the West Midlands, marked the start of works on the site of the future Curzon Street station earlier this month. Works are underway on 60 sites across the route from London to Birmingham, with over 7,000 jobs supported by the programme across the country leading to 30,000 jobs at peak construction.

More information on the events and locations can be found on HS2’ Commonplace websites: HS2 in Birmingham and HS2 in Solihull.

“Bringing these designs to the public is a huge milestone for a scheme that constitutes one of the biggest infrastructure projects that the UK has seen in a century. Birmingham will be at the heart of HS2 with Curzon Street acting as an instantly recognisable, landmark destination. Our role is to create public spaces that enhance this sense of place and character, providing vibrant landscape spaces that connect the different elements of the station together and help link different parts of Birmingham together. We want to enable everyone to enjoy the experience of Curzon Street, making the most of its city views while encouraging wildlife and biodiversity into this most urban of environments by creating space for nature.”