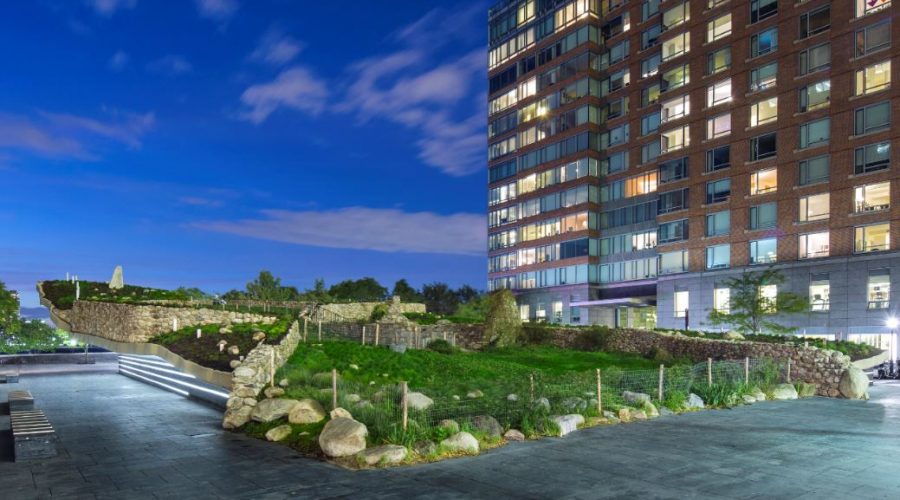 Dedicated to raising awareness and to commemorate the Great Irish Famine, the Irish Hunger Memorial is situated on a green space spreading across half an acre in the Battery Park City area of Manhattan, New York City. 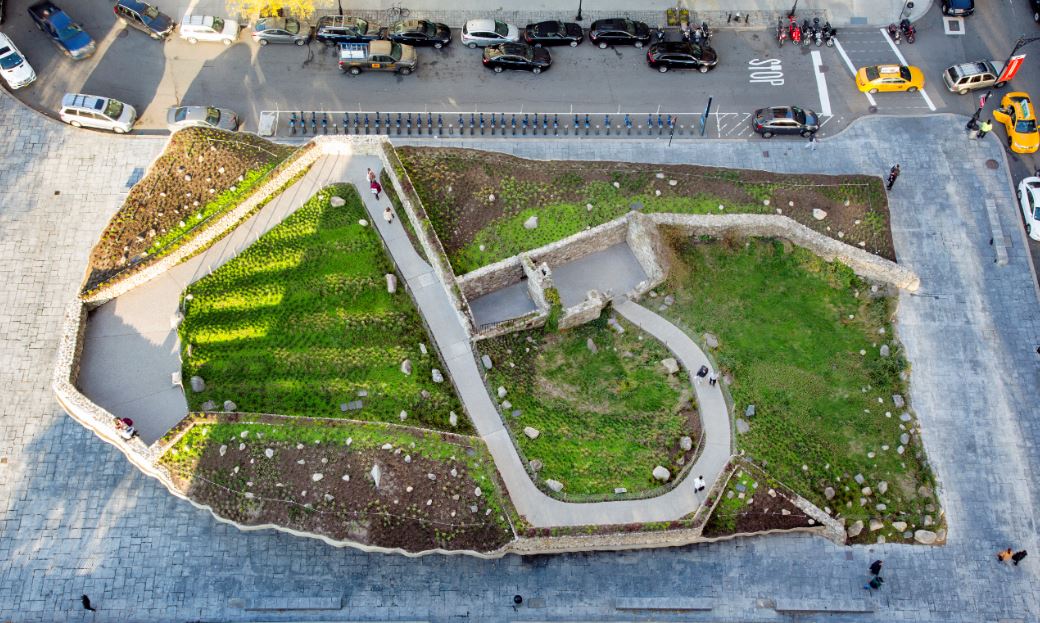 Marking ‘The Great Hunger’ where one million starved to death between 1845 and 1852, this monument attracts visitors from across the globe each day since it opened seventeen years ago.

Construction of the memorial first began in March 2001, and despite the September 11 attacks on the nearby World Trade Center, which also affected surrounding areas, the memorial was completed in 2002.

Designed collaboratively by internationally renowned sculptor and public artist, Brian Tolle, landscape architect Gail Wittwer-Laird, and architecture firm 1100 Architect, the memorial is landscaped with stones, soil, and native vegetation transported from the western coast of Ireland — with stones included from all its counties.

The memorial showcases a rural Irish landscape with an abandoned stone cottage, stone walls, potato fields within fallow land and the flora on the north Connacht wetlands in Ireland. It was designed to represent both a metaphor for the Great Irish Famine, and a reminder that hunger today is often the result of lack of access to land.

The authentic Irish cottage from 19th century Carradoogan, in the parish of Attymass, County Mayo, belonged to the Slack family, which had been deserted since the 1960s. Once the design of the memorial was underway, the family heard of its development and donated the cottage to the memorial, saying it would provide a “memory of all the family members of previous generations who emigrated to America and fared well there”.

Artist for the memorial, Brian Tolle, used a variety of media to design this particular piece which overlooks the Hudson River. His approach involves in-depth research and amalgamating ‘contemporary and the historical’ in the design.

Visitors to the 96′ x 170′ memorial walk through a rural Irish landscape, with paths carved into a hill thickly lined with native Irish plants and stones imported from each of Ireland’s 32 counties. The paths lead to a viewing point 25 feet above street level, which boasts views of the Statue of Liberty and Ellis Island over the Hudson River. Along the base are bands of texts separated by layers of imported Kilkenny limestone. The text, which combines the history of the Great Famine with contemporary reports on world hunger, is cast as shadow onto illuminated frosted glass panels. 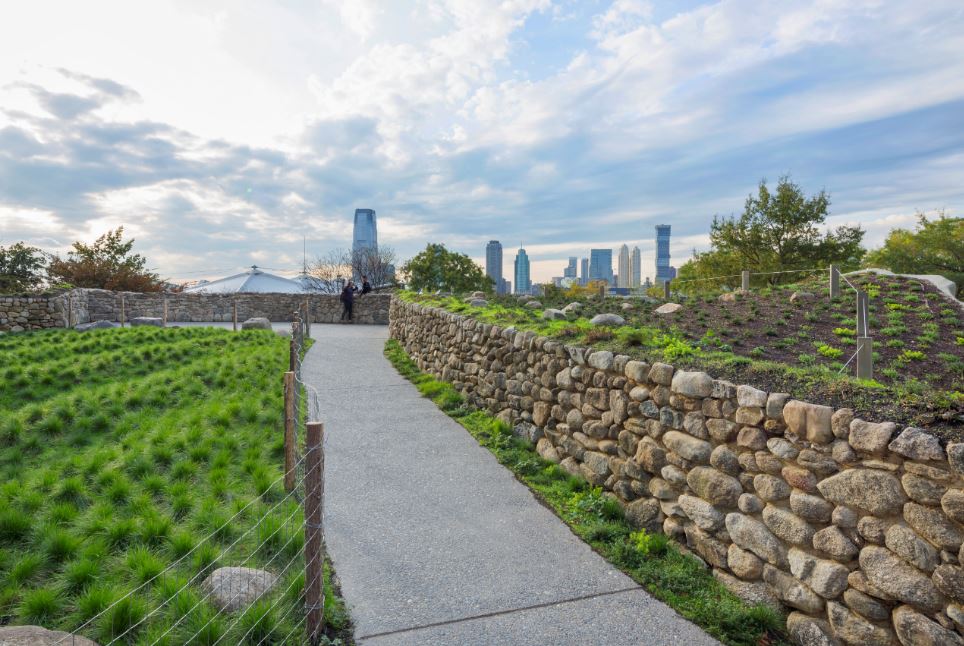 When the memorial was first being developed, the then Irish President, Mary McAleese, wished to send a gift, sourcing a stone from each of the 32 Irish counties and engraving it with its county title before the artist set them at various points around the ground for visitors to explore.

Despite the beauty of the monument, cracks and leaks within the structure started to appear soon after it was opened to the public. Water was escaping into the electrical space underneath the memorial where glass display cases and lights were installed. These leaks led to efflorescence staining on the glass display panels and discoloration of a partially cantilevered slab. 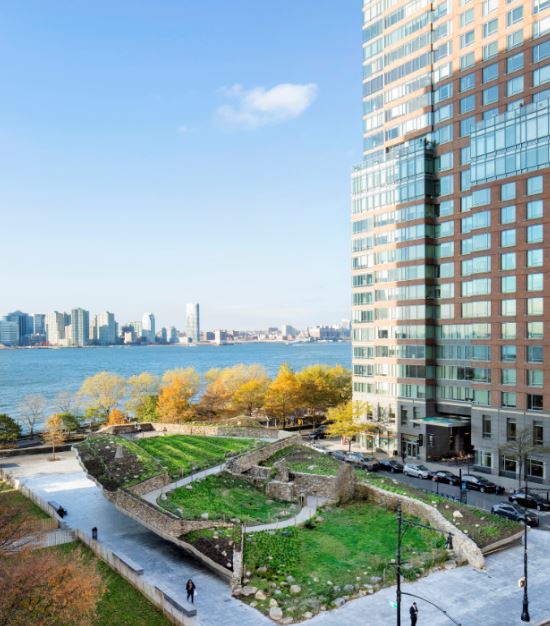 Attracting a huge number of visitors daily, a solution to tackle the waterproofing was required promptly. After unsuccessful attempts to correct the issues, a major restoration project was launched in 2016 involving the Battery Park City Authority (BPCA), CTA Architects, construction manager The LiRo Group, and roofing contractor Nicholson & Galloway.

This involved a new weatherproofing solution, which required the removal of the original roofing and ineffective waterproofing system, and reconfiguring and reinforcing the concealed core walls and substrates.

Architects and contractors decided upon a cold-applied liquid waterproofing system to address the leaks. It was vital that the memorial maintained its aesthetics as well as functionality, which will enable it to be enjoyed by visitors for many years to come. The original construction only featured Kemperol on the flashings. When problems began to occur, it was clear that the waterproofing had failed everywhere except where the Kemperol had been applied, which is why Kemper System’s Kemperol 2K-PUR was specified for the entire multi-million-pound restoration project.

A total of 2,000 sq. ft of Kemperol 2K-PUR was specified and applied over all the exposed core walls and substrates providing a seamless and highly-durable waterproofing membrane.

The 2K-PUR provides a much more robust and reliable solution, which will ensure the memorial remains watertight for decades. Cold-applied, it is installed using a reinforcement fleece, which is laid directly into the wet resin. More resin is then immediately applied on top to completely saturate the fleece. This provides a visible guarantee that the right depth of coverage has been achieved avoiding the risk of weak spots or application error.

Contractors had to carefully remove the landscaping surrounding field-stone masonry walls and portions of the cottage. All elements, including every single stone, were numbered and then removed, catalogued, and stored in containers on site during the renovation. This ensured that the team put each piece back in its correct place and position. The ineffective, existing waterproofing system was then also removed. Once the substrate areas were cleaned and primed, Kemper System was then applied before reassembling the elements of the monument back together.

Kemperol 2K-PUR is installed in a single, wet-on-wet process, ensuring quick and durable application – ideal for a multi-layered restoration project such as this. Manufactured using an 80 per cent castor-oil formula derived from sustainable sources, the liquid system bonds directly to the substrate forming a seamless, elastomeric waterproof membrane that cannot delaminate and is UV stable.

The Kemperol was also wrapped around the edge of the slab for additional protection. As this was visible and to address concerns by the memorial’s artist, a mineral surfacing system which matched the finish of the concrete was incorporated into the membrane.

This system was chosen thanks to its proven 20-year track record, and continues to be one of the most popular and sought-after systems for a variety of projects across the world. Its unique qualities make it ideal for waterproofing buildings where environmental considerations are a priority or for occupied properties when the work has to be carried out without disruption from strong odours.

The 2K-PUR provides a much more robust and reliable solution, which will ensure the memorial remains watertight for decades. The renovation took two years to complete enabling the memorial to open its doors to visitors again in March 2018.