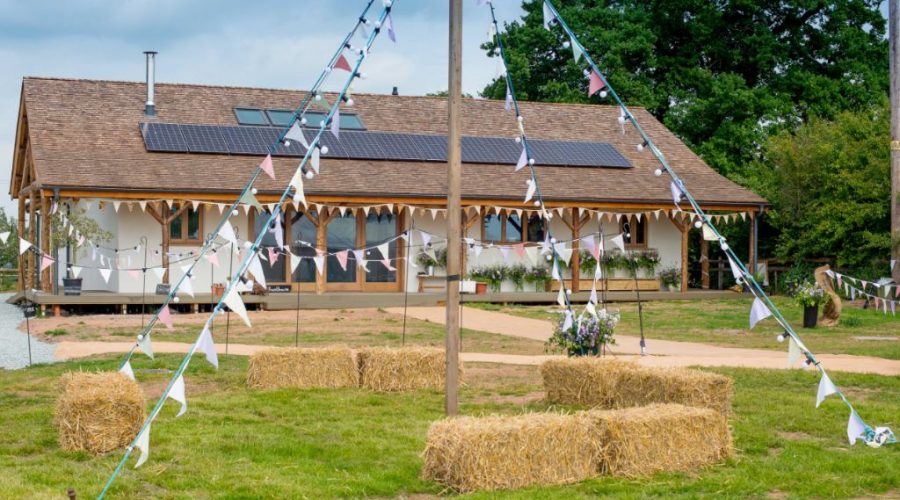 One of the biggest volunteer-built organic straw-buildings in Britain, and an architectural piece of innovation constructed of just five main materials, is ready to throw open its doors for the first time for youth groups such as Scouts, Guides, care groups as well as weddings.

The Bunkhouse at Fordhall Farm, England’s first-ever community owned farm supported by the likes of Alan Titchmarsh and Sting, is made simply of straw, wood, sheep’s wool, car tyres, clay and lime.

However there was nothing simple about the construction of this unique and stunning green-friendly venue, with 50 volunteers putting in at least 1,000 hours to complete the structure. There were no cranes in sight as builders used more traditional building techniques involving ropes and pulleys to construct this incredible piece of architecture.

The Bunkhouse will officially be launched on October 12 at the Shropshire-based farm by architectural designer and television presenter Charlie Luxton who writes and specialises in sustainable architecture.

The structure contains 758 straw bales into the walls which are naturally insulating, keeping the building cool in summer and warm in winter; 138 recycled tyres in its foundations, 13 solar panels on the roof, 20,000 cedar shingles to cover the roof painted with natural tree water-repeller pine tar, and 26 larch trees which would otherwise have been wasted from the timber industry.

Charlotte Hollins, manager at Fordhall Farm said: “The Bunkhouse is a superb addition to Fordhall Farm, and it completely fits in with our totally organic ethos.

“So many of the materials used for the building would have ended up as waste or landfill, but now they are given a long lasting purpose. Plus the others, such as the straw and lime have resulted in us storing and locking carbon into building, thereby helping to drastically reduce our carbon footprint.”

As Fordhall Farm continues to diversify, The Bunkhouse offers the perfect platforms for things like green weddings, wellbeing retreats, immersive organic experiences as well as being a base for the community groups who are hosted at the farm.

“There are two groups that are permanently based at the farm, the Youth Project and the Care Farm,” said Charlotte.

“The Youth Project is a scheme which gives young people who are struggling within a mainstream school setting to learn more hands-on practical skills, such as working with wood and helping with the day-to-day maintenance on the farm.

“The Care Farm is a group supporting adults with learning difficulties. They get involved in all aspects of our community garden such as growing and harvesting food for the on-site café, composting and even growing some cut flowers.

“The portacabins that had accommodated these groups for many years were draughty, cold and cramped. The bunkhouse was built to provide a more spacious and suitable accommodation for these groups, as well as our residential volunteers, whilst also giving them room to grow in the future.”

There is also a strong educational link with The Bunkhouse as the building will be used to provide accommodation for children and young people to stay overnight on the farm and learn all about the way that the farm is managed, providing healthy, sustainable food in harmony with nature. Fordhall Farm is promoting The Bunkhouse to schools, Guides, Scouts and other uniformed groups, so that the next generation can immerse themselves in farm life.

The Bunkhouse was built thanks in part to a successful crowdfunding campaign which raised £56,500 towards the construction and a further £450,000 from grant-giving trusts and other funding organisations, including Power to Change, the National Lottery’s Our Bright Future fund, and the Jean Jackson Charitable Trust.

Fordhall Organic Farm is England’s first community-owned farm. The revolutionary farmer Arthur Hollins was born at Fordhall, in Market Drayton, Shropshire, in 1915, and took over the helm at the age of just 14.

Despite the push for ‘new’ chemical farming, in the 1940s he adopted organic principles to which he remained faithful for the rest of his life.

In the 1990s, Fordhall Farm came under serious threat from big business and the bulldozer. After over 10 years of legal battles, Arthur was on the verge of being evicted in 2003, and his life’s work was about to be reduced to ruins.

His son and daughter, Ben and Charlotte (then 19 and 21) returned from college and university to lead the fight to save Fordhall. By 2006, with less than six months to raise £800,000 to buy the tenanted farm outright, they began to sell £50 non-profit making community shares in the farm.

When people read about their plight in the national press, they immediately supported the brother and sister team.

Fordhall became England’s first community-owned farm – with one farmer, Ben, and no fewer than 8,000 landlords – a number that’s increasing all the time. The land remains organic to this day. The cattle and sheep are reared using a system called Foggage farming and the pigs are naturally free-range.

The bunkhouse in numbers

What is the bunkhouse made of?