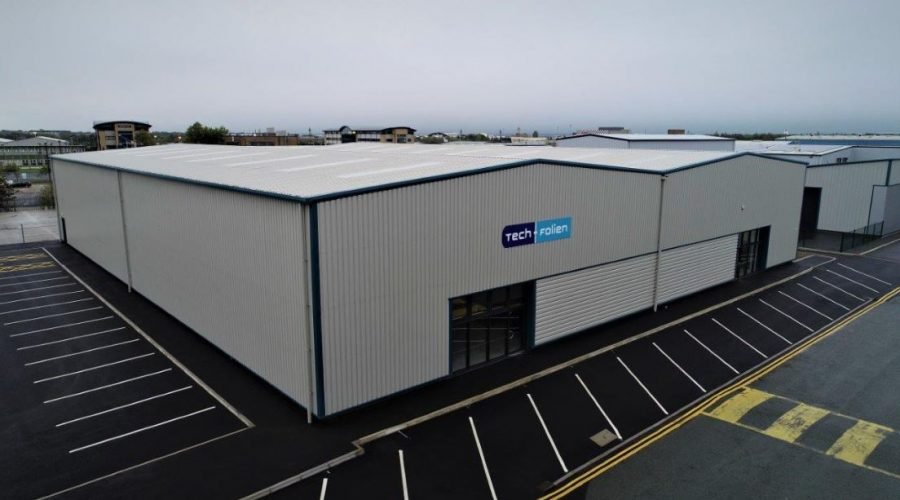 Triton Construction has completed works to deliver a new 30,000 sq ft warehouse facility in Liverpool for Tech Folien, a well-known niche producer of blown film extrusion for the labelling and graphics industry.

The new £1.2 million facility at Triumph Business Park on Speke Hall Road is an addition to Tech Folien’s existing 100,000 sq ft manufacturing facility on the same park.  Developer Valedown which owns the 60-acre Park contracted Triton to build the warehouse along with slab parking for up to 20 articulated lorries.

“With a strong association with Valedown we are pleased to have completed another project on Triumph Business Park.  As the former site for the Triumph Motor Company there was some site preparation needed to shift over 1000 tonnes of spoil and create a new bund.  We installed a new draining system including attenuation for the warehouse which was future proofed for expansion, or creation of internal office space.  The building has two level access loading bays and two curtain wall facades at each end allowing potential to split the building.”

Tech Folien is a part of MDV Group, a German established niche manufacturer with a group turnover of 40 million Euro and 130 employees. The new warehouse will facilitate expansion with a separate storage facility for greater stock supply to customers.

“A very swift and efficient build again from Triton.  The project came in on budget and handed over four weeks early. Well done Triton!.”

Triton Construction is a £60 million turnover company providing design and build, civils, fit out and refurbishment services.  Established for more than 14 years it employed over 80 people across offices in the North West and Yorkshire.  Its commercial portfolio includes a £5 million facility for Big Yellow Storage in Manchester, Leeds Bradford Airport terminal upgrades, a new recycling centre for Next, and numerous storage, distribution and office facilities.