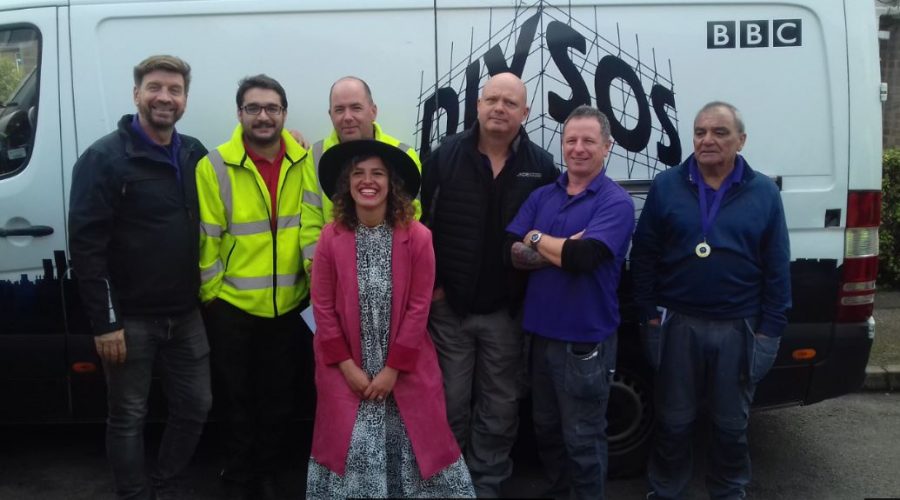 The ever-popular BBC makeover show that brings communities together to improve the homes and lives of disadvantaged individuals and families was in Corby Northamptonshire during October.  This time the show needed help for 16 year old Jordan Hutchinson who has cerebral palsy, but despite this holds numerous awards for raising funds for local chairities.

When the call went out Rikki Clare and Darrel Cumberpatch from Bushboard’s Wellingborough manufacturing site jumped at the chance to be involved.

Bushboard Evolve Luna Touch was installed by specialist Bushboard fitters throughout the kitchen and utility room.  The show is due to be aired during 2020.

DIY SOS: The Big Build is the BBC’s flagship home renovation programme; it has been running for 20 years, and attracts up to 5 million viewers per episode in its prime time slot on BBC One. The award-winning show, presented by Nick Knowles and his team of Mark, Billy, Chris and Jules, takes on extremely Big Builds across the country in just nine days. We completely rely on the support and generosity of the local community of tradespeople and suppliers to carry out the work, to help transform the lives of truly deserving families. We are extremely grateful to work with some fantastic companies on our BAFTA and NTA nominated, National Television Choice and Royal Television Society award winning show.

Jordan Hutchison has cerebral palsy and epilepsy but incredibly Jordan has won many awards over the years for his fundraising one of which was a Courage Award at a Northamptonshire Achievement Award’s after raising £30,000 for two sensory rooms in a local school for other disabled children. He’s a growing boy with a very strong mind, he just wants to develop like any other boy his age but just doesn’t have the space or facilities in which to do so. All he wants is a bedroom with a wet room – he just wants some independence. All his family want is a home, again.