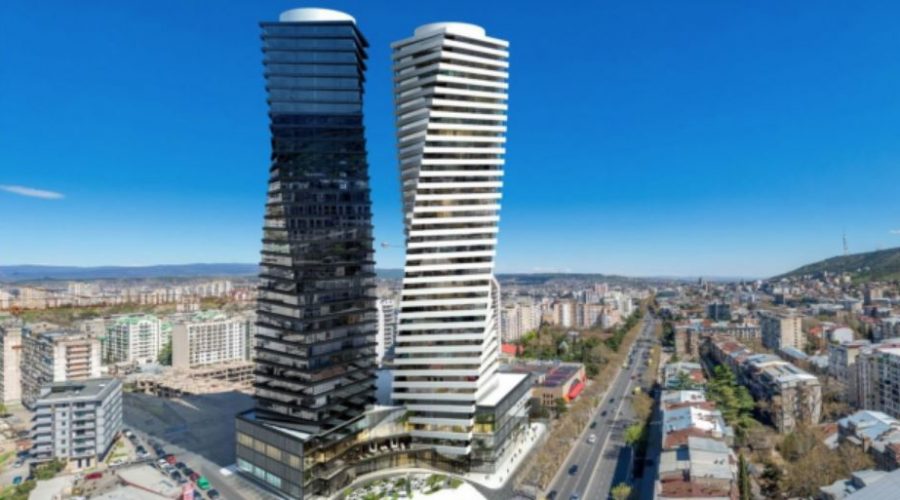 Axis Towers is the first facility in the world where two towers turn around their own axis, but stand on the same foundation, separated by multiple expansion joints. Attracting much interest and acclaim from the architectural community, each floor is turned by two degrees around its axis in order to achieve the desired spiral effect.

Located in the Vake district of Tbilisi, Georgia, and designed as a multi-functional complex, the ‘White Tower’ (Stone Tower) comprises apartments whilst the Black Tower (Glass Tower) is home to a hotel, offices, a fitness centre with a swimming pool, and a Sky Bar at the very top.

The upper floors of the towers offer beautiful views of the entire city and, in particular, the Dynamo Stadium. The towers are equipped with 22 of the fastest elevators in Georgia and the total parking area is equal to the area of four football stadiums. The building’s architecture is quite complex, and all constructional solutions are designed in such a way as to withstand the heavy winds which typically frequent Tbilisi.

The Reynaers Aluminium systems were chosen to be part of the Axis Towers project because of their reliability (there was a request to test 4500 Pa), ergonomics and their aesthetics complementing the overall appearance of the building. The project has fulfilled all the necessary thermal parameters and has been designed to withstand the particular heavy winds unique to Tbilisi.

Georgia is a country with medium seismic activity resulting in Axis Towers having to tackle a complex array of design and structural challenges including applying significant measures to attain shock wave resistance. Thanks to the necessary gaps between the double-glazed windows and aluminium profiles of the Reynaers systems, Axis Towers were able to achieve the required high level of the indicator.

The project also efficiently projects daylight transmission and noise reduction to a high standard thanks to the innovative and versatile use of Reynaers Aluminium systems.

Opening sashes of large sizes were used, alongside doors that were more than 3.5m in height and greater than 2m in width. Constructions of non-standard height and width were also applied, including the unique implementation of the CP 155-LS slide system built into the CW 50 system – the first time this has ever officially been incorporated. The CW 50 façade system with embedded CW insert structural doors was also used, with reinforced hardware of the American manufacturer. In addition, Reynaers Aluminium sliding systems CP 155-LS and CP 68, window-door system CS 77 (windows, doors of internal and external opening) were installed.

The standout project is the largest of its kind for Reynaers Aluminum in Georgia today and is a fantastic example of what its systems can help developers achieve.

A showcase of the Axis Towers project is available here: https://www.reynaers.co.uk/en-UK/inspiration/aluminium-project-references/axis-towers.