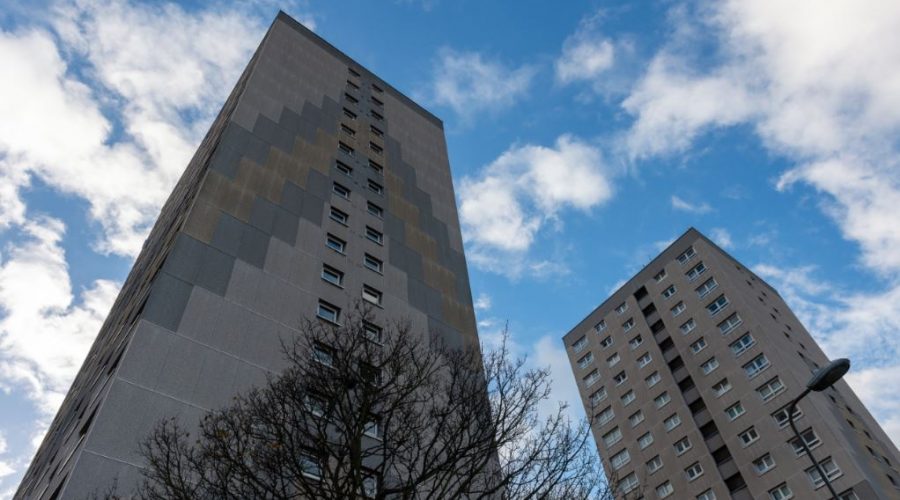 Originally built in the 1960’s, Market Hill housing estate in Scunthorpe is made up of ten maisonette blocks, each home to eight flats, and three high rises with 76 flats in each building. Heating and water was supplied to all the properties by a district heating system, but due to excessive corrosion and leaks, the piping needed replacing. This full system refit had to be undertaken with minimum disruption to the 350 residents and with no relocation into temporary accommodation.

The housing’s original heating system was built using conventional steel pipe systems in ducts, and in the 1990’s the system underwent massive changes using pre-insulated steel. However, this solution only lasted a further 20-25 years. In recent years, the system has aged significantly and following a number of particularly challenging system failures and maintenance problems, with constant interruptions to the residents including a lack of heating and hot water, Ongo Homes made the decision to replace the full district heating network.

Traditionally, damaged pipework would be replaced by more steel piping. However, due to the nature of the project, the existing piping system could not simply be switched off and replaced; doing so would have meant relocating the people living in Market Hill’s housing, at great expense to Ongo Homes. This ruled out traditional building materials that are usually time consuming to install and weld, so Sutcliffe Consulting Engineers, employed directly by Ongo Homes to design and supervise the Mechanical and Electrical services installation, turned to Uponor, specifying its Ecoflex pre-insulated pipe systems.

The heating network consisted of a new plant room installation, plant room piping and replacement of the full district heating system. Uponor’s Ecoflex pre-insulated pipe system was a perfect fit, due to its increased lifespan and potential for long, joint free runs making it quicker and easier to install. Another reason for choosing Uponor’s plastic piping over a steel alternative was that its system could be run alongside the existing mains, and work in tandem with old mains that were still active. This flexibility meant that the building work disruption was kept to a minimum and residents could remain in their properties.

Working within a limited space, K Binks Mechanical Engineers – appointed by Ongo Homes to install the system – split the pipe order so the products were only delivered to site when required. This meant that for a five week period between October and November 2018, pipe connections were undertaken every 12 meters across the total pipework run of 1,500m, making the project particularly unique.

The next phase of the project was to completely disconnect the old system, leaving the new system to successfully transport water around the housing. To achieve this, Uponor worked closely with the different contractors involved to provide technical assistance, ensure that the products used were fit for purpose and to oversee the smooth disconnection of the old system.

“In total, 2km of pipes were installed, bringing heating to the residents. It’s a fantastic job, which has really made all the difference to the homes. The project had its challenges, but on the whole it ran smoothly, and any hitches we did have were solved with as little fuss as possible, which is a testament to the good working relationship amongst us.”

“The Scunthorpe housing project is one we’re immensely proud of. I want to say a huge thanks to the Uponor project team, the installation team and Mechanical Engineers, K Binks, as they ensured that all of the work was carried out without any delays and with minimal disruption to the residents.

“We worked well as a team and overcame significant challenges, such as working in tight spaces to ensure minimal disruption to residents. In the end we got the main pipework run dug, laid and backfilled in just five weeks; a duration which is unheard of in the industry.”

For more information on Uponor and the solutions it offers, please visit: https://www.uponor.co.uk/