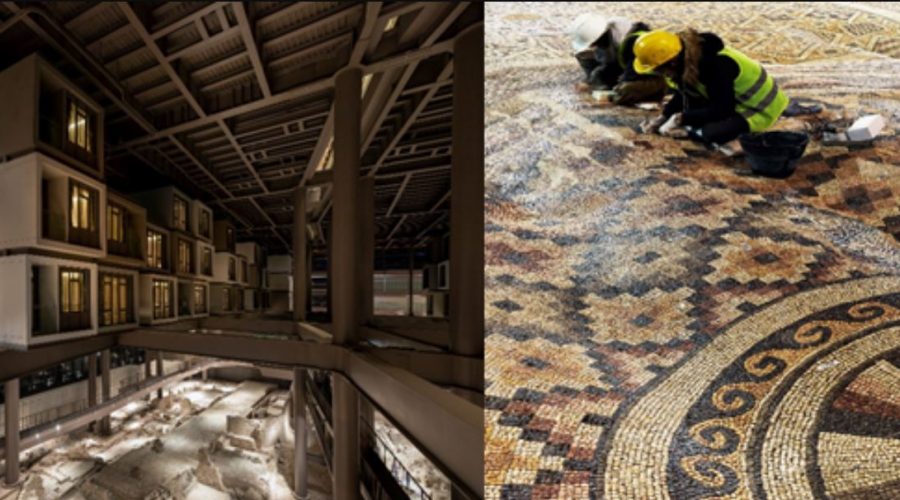 The Museum Hotel Antakya, a futuristic new design hotel that hovers above 2,300 years of history, has been awarded an Honourable Mention in Architectural Design by The Design that Educates Awards 2020

When the Asfuroğlu family broke ground for this new hotel in Antakya, or ancient Antioch, the cradle of Christianity and one of the largest cities of the Roman empire, little did they know what they would find or how it would change the region forever.

The archaeological findings discovered in Turkey’s most systematic excavation since the 1930s on the project site in Antakya, which is close to St. Pierre Church – an important Christian pilgrimage site – led the Asfuroğlu family to enlist Turkey’s award-winning architect, EAA-Emre Arolat Architects, to completely reimagine the hotel design. The result is a one-of-a-kind marvel that is suspended above the public archaeological park and museum where a selection of the 30,000 ancient artefacts are on display.  Exquisite findings include the largest single-piece floor Roman mosaic ever discovered, thought to be the floor of a villa forum, a rare Pegasus mosaic and intact Marble Eros sculpture.

The Design that Educates Awards (DtEA) recognises, showcases, and promotes globally the best ideas and implementations of architecture and design that can educate. Each year, an esteemed panel of judges selects the outstanding ideas and implementations in the categories of architectural design, product design, universal design, and responsive design. The theme of the awards has been inspired by the research ‘Educating Buildings’ (‘Bildende Bauten’) by Dr. Peter Kuczia. The launching of the awards is the result of a collaboration between the Laka Foundation and Solarlux GmbH.