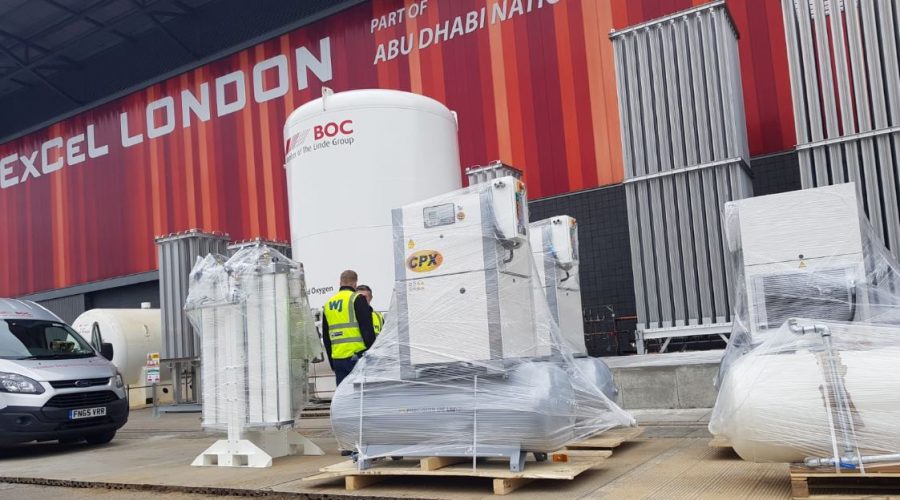 In these troubling times it has been truly inspirational to witness the efforts of organisations throughout the construction and security sectors in building the NHS Nightingale Hospital at ExCeL London. As an integral part of this massive collaborative feat, Wilson James used its security and logistics expertise to help create a facility that will treat those seriously ill with coronavirus.

We are living through an extraordinary period in our history – something that is exemplified in the creation of NHS Nightingale. Arguably the UK’s most ambitious medical project, it is now one of the world’s largest critical care units for treating patients with coronavirus. NHS Nightingale will be able to hold as many as 4,000 patients across 80 wards and is the first of several such facilities planned across the UK.

When Prince Charles opened the facility on 3rd April, it marked the culmination of a project that was only started less than two weeks previously. During this time the construction industry joined forces with the military and NHS to achieve something that health secretary, Matt Hancock, described as ‘testament to the work and the brilliance of the many people involved’.

Organisations from across the construction sector worked together to plan, design and build NHS Nightingale and Wilson James was involved from the very early stages. Jason West, Wilson James’ head of logistics and integration for NHS Nightingale, explains, ‘The NHS needed security and construction logistics functions to be implemented and we were ready, willing and able to respond. We used expertise from all areas of our business to coordinate with the military and other private sector contractor companies to support the NHS. The whole really was greater than the sum of its parts and the level of cooperation and collaboration demonstrated across the board was incredible to witness.’ 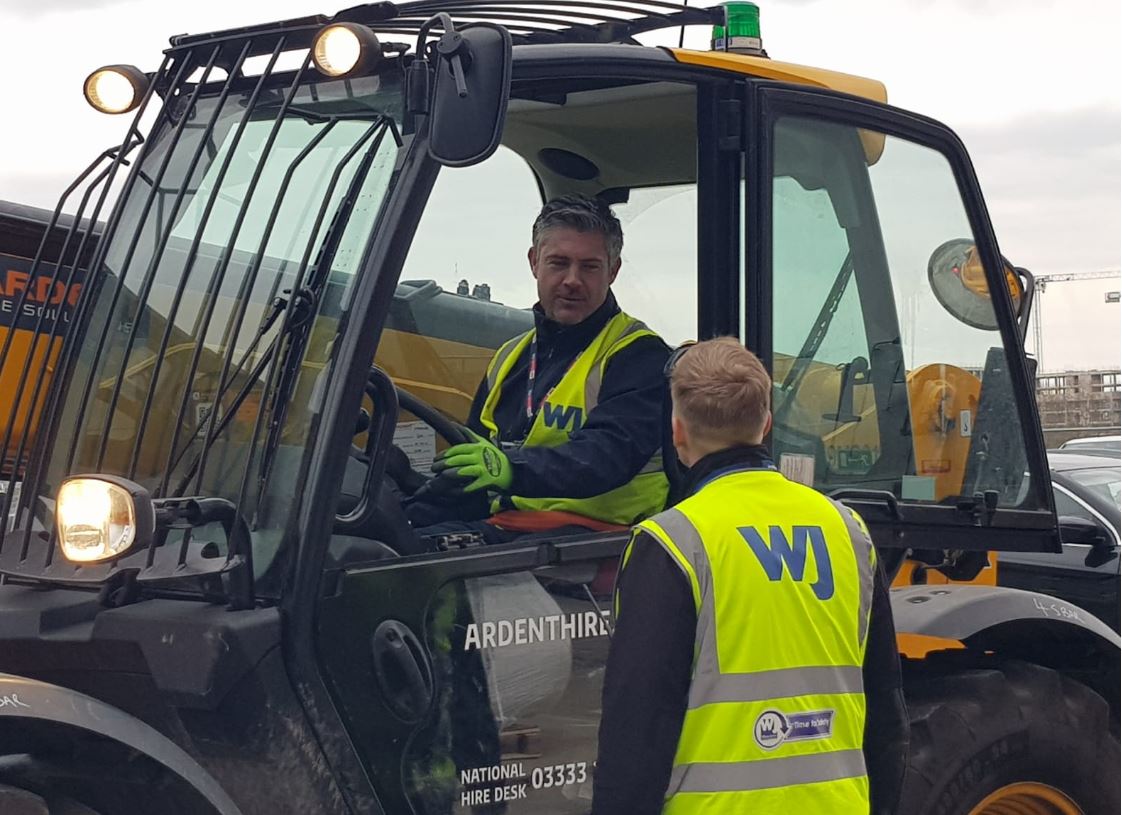 Wilson James was initially tasked with coordinating the construction logistics aspect of the operation but was soon asked to support the NHS supply chain as well. This meant making sure that items including drugs and medicines, medical equipment, beds and hazardous waste bags were met on delivery and then categorised, audited, inventoried, stored and delivered to where they were needed, when they were needed and in required quantities. This required coordination with both civilian colleagues and the Royal Army Medical Corps.

Asked to describe the process, Jason West replies, ‘Initially, we were able to consolidate the construction materials at ExCeL, however, we were subsequently informed that the NHS would need the designated area for other purposes. We therefore relocated the construction materials to our nearby London Construction Consolidation Centre (LCCC) and replaced them with 25 lorries’ worth of medical equipment. Working alongside 84 Medical Supply Squadron, we configured a process whereby every 30 minutes a delivery was received via separate east and west entrances and offloaded. Our logistics people had to adapt, learn and understand the difference between construction materials and medical product at pace and scale. They then had to identify what had arrived and what hadn’t, categorise construction materials accordingly and send them to the LCCC.’

Parts of the process

To further streamline the process, drive efficiency and meet ongoing demand, a 20,000ft2 marquee was erected to hold two hours’ worth of stock that could be replenished on an on-going basis. Fully lit and designed to house medical consumables in a dry and safe environment, it also allowed operatives to build items such as flat-packed beds on-site, which could then be delivered along ExCeL’s central thoroughfare. This meant logistical delays were avoided and everyone knew what items were on-site and that they were securely located.

Many of the coronavirus patients that will be admitted to NHS Nightingale will have respiratory symptoms including fever, cough, shortness of breath and other breathing difficulties. Hundreds of beds have been fitted with oxygen and ventilators and this equipment relies on a purpose built on-site oxygen ring main. To create this, liquid oxygen tanks and other compressor equipment had to be transported from all over the country and Wilson James was responsible for its safe dispatch and arrival.

At the same time Wilson James was developing and implementing this complex logistics strategy, on the evening of Sunday 29th March it was also presented with the challenge of creating and operating a temporary off-site car park. Initially this was to accommodate 1,000 cars but has now been extended to 2,000.

Jason West takes up the story and says, ‘When we were asked to do this our first response was where are we going to put it? We then identified a suitable piece of land adjacent to ExCeL that would be suitable, and contacted the developer, Lendlease, which informed us that it was actually owned by the Greater London Authority (GLA). After many phone calls, by 11.00pm that night we received authorisation from the GLA to go ahead. We then contacted Keltbray which, along with Lendlease and members of the Royal Engineers, arrived on-site at 7.00am the next day to begin work on turning it into a car park, while we made sure items including construction materials, cones, welfare facilities for staff, lighting and barriers were available. It was simply awesome to be able to do this and the guys on the ground even wrote “Thank You NHS” on the roadway.’

We’re in this together

Managing the security of a dynamic and complex site requires a high level of strategic implementation. By drawing on its experience with projects such as the 2010 Commonwealth Games, Wilson James was able to configure a workable and effective system that kept people and assets safe, as well as a ‘chain of custody’ to protect equipment. At the same it made sure that workers were able to access the areas they needed to be in without hindrance or delay.

Security across the site was divided between Wilson James, which focused on internal and secure logistics, while G4S took care of the perimeter. Normally business rivals, the cooperation and mutual support shown by the two organisations illustrated the collaborative spirit evident throughout this project.

For Lee Evans, Wilson James’ security lead for NHS Nightingale, this was one of the most striking aspects of the experience and he states, ‘All over the site boundaries were broken between competitors and it takes something very special to make that happen. This was a tough project with long antisocial hours and little preparation or planning time. Despite that, it has been very rewarding and there were no serious injuries, incidents or accidents. For me personally, configuring the security for NHS Nightingale’s opening ceremony, along with our security partners and the Metropolitan Police, was particularly special.’

As the UK combats the spread of coronavirus, those who have worked so hard, while selflessly compromising their own safety, to create NHS Nightingale will hope that as few people as possible pass through its doors. Keith Winterflood, Wilson James’ director of operations at NHS Nightingale, concludes, ‘This project just shows how the various elements of the construction sector can come together as one, from design to mechanical and electrical (M&E), when there’s such an important goal to achieve. Everyone has dealt with the immense pressure in a positive way, employing a heads down and “let’s go for it” attitude. We’ve all been pushed to the extreme but when the coronavirus pandemic is over, and it will be over at some point, the memory of what was achieved with NHS Nightingale will live on.’

For over 25 years, Wilson James has been a leading provider across three core service lines:

Security: Guarding for locations that demand the highest levels of security across a range of industry sectors.  Includes provision of security guards, front of house staff, consultancy and personal protection services, amongst others.

Construction Logistics: Design, planning and delivery of bespoke logistics solutions which includes everything from site set up and organisation of accommodation for ground staff, to the management of secure materials movement around the construction site.

Aviation: Providing unique solutions to some of the busiest airports in the UK, including Transport Operations, PRM, Welcome Services and Secure Logistics.