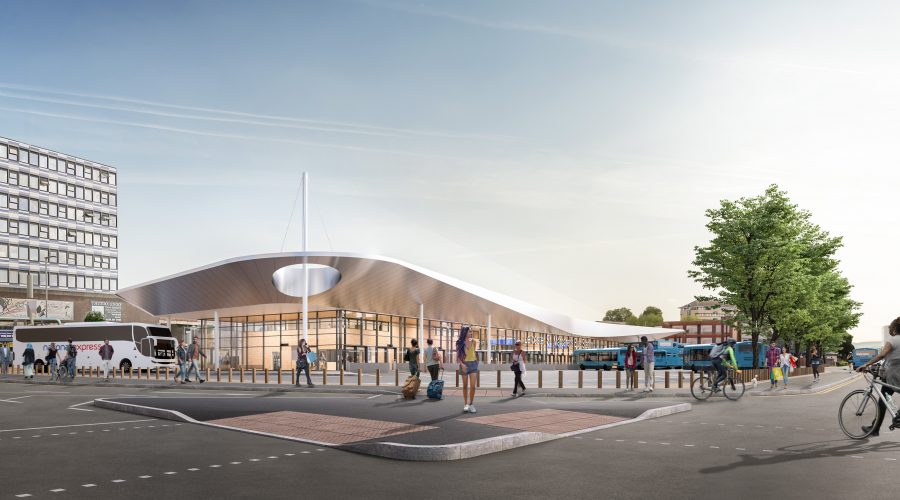 The current bus station on Gravel Street, which was first built in 1940 and redesigned in 1985, will be replaced by a modern, sustainable building. The new design includes LED lighting, mechanical ventilation with heat recovery, air source heat pumps and 750 square metres of solar panels, which will generate enough energy to power the station and feed extra energy back into the grid. The building will also incorporate electric bus charging points and a new fully glazed envelope in the concourse, maximising lighting levels and significantly reducing energy usage.

If approved, these designs will make Leicester St Margaret’s one of the most energy efficient transport hubs in the country and the first bus station to achieve net zero carbon status. 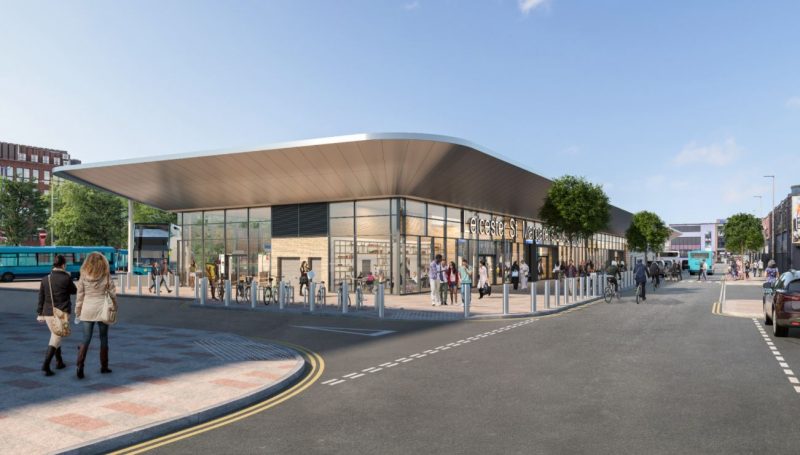 Tom Hewitt, architect director at BDP, said: “St Margaret’s Bus Station complements the neighbouring Haymarket station and is also the main terminal for inter-urban, regional bus and national coach services in Leicester – but the building is in serious need of modernising. Leicester City Council’s team asked us to significantly increase the quality and capacity of the building as well as the surrounding environment, so the designs we have submitted will totally transform the station and bring the area back to life. Not only have we designed an inner-city transport hub that is practical and beautiful but it also meets the council’s goal of becoming the most energy efficient station in the country.”

Under the plans, National Express services to and from Leicester St Margaret’s will be allocated dedicated space within the terminal and the capacity of regional bus services will increase from 18 to 24. There will be changes to footpaths and roads immediately surrounding the bus station with better facilities for pedestrians and cyclists, including storage space for 150 bicycles. New landscaping and tree planting, and better and safer crossings have been designed to soften the impact of the ring road.

Tom Hewitt continues: “As part of our plans, we are proposing significant upgrades to the public realm and immediate surroundings to increase footfall and bring more commercial benefits to the area. We are extremely excited by the possibilities that this new gateway building creates for the city of Leicester and we look forward to bringing it to fruition next year.”

Deputy city mayor for environment and transport Councillor Adam Clarke added: “These exciting plans to replace St Margaret’s Bus Station with a striking, new and carbon-neutral building will signal the beginning of a revival of this part of the city. It will provide a huge boost for sustainable transport, help regenerate a run-down but important gateway into Leicester and attract further private investment into the city.”

The development project named St Margaret’s Gateway is a regeneration project supported by a £10.5m allocation from the Getting Building Fund, a pot of government funding awarded to the Leicester and Leicestershire Enterprise Partnership Limited (LLEP) for shovel-ready infrastructure projects to create jobs and support economic recovery across the country.

A full planning application is in the process of being submitted. If given the go ahead, work on the demolition of the existing St Margaret’s Bus Station building could begin early in the new year.

BDP has built a strong reputation in the transport and transit sectors across the UK, having recently completed the interdisciplinary design and engineering services for the Gloucester Transport Hub and the Ordsall Chord Northern Hub project in Manchester.

BDP is an international interdisciplinary practice of architects, engineers, designers and urbanists. We work closely with users, clients and the community to create special places for living, working, shopping, culture and learning across the world. Founded in 1961, we now have studios across the UK, Ireland, Netherlands, UAE, India, China, Singapore and Canada. BDP has a leading track record in all major sectors including health, education, workplace, retail, urbanism, heritage, housing, transport and leisure and has won over 1000 awards for design quality.

In March 2016, BDP combined forces with Japan’s leading engineering practice Nippon Koei to form an integrated design group of genuine international reach. Sharing a philosophy which places an emphasis on design integration and community impact, the new group offers a unique combination of deep technical skills in engineering, architecture and the full range of design disciplines.