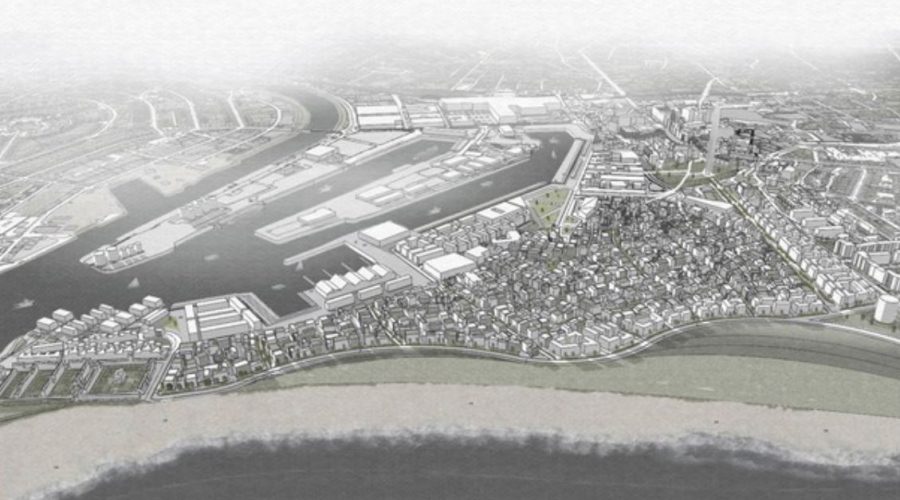 A new urban village called ‘St.Clements’ could be created in the historic heart of Aberdeen under plans being proposed by final year architect students at The Scott Sutherland School of Architecture and Built Environment at Robert Gordon University.

The new village would be named after the 15th century church of St.Clements, which was originally built to serve the small fishing community of Footdee and would be created between the harbour and esplanade, in the area between Castlegate and Footdee.

The proposals are the work of final year architecture students from The Scott School of Architecture, who have carried out a two-year project, to explore issues concerning urban living, with a particular eye on generating ideas for the future City of Aberdeen.

The project builds on the work of last year’s final year students who envisaged a new beachfront for the city of Aberdeen and an opening up of the harbourfront to people on the North edge of the harbour.   The new proposals aim to make links from Castlegate to the beachfront and harbour more feasible and pleasurable.

One final year student involved in the St.Clement’s project, is David Reid from Prestwick. David explains how his experience living through the coronavirus pandemic led him to question his way of living:

“During the pandemic I think a lot of people really reassessed their priorities when it comes to how they spend their time, especially those commuting, and where they spend it, parks and the countryside have never felt so valuable. These are key considerations we took with us during our design work on the project and feel this approach would be applicable across the city and country. In the end I think it’s about putting people back at the heart of our cities.

“Our aim is to create a new urban village that is sustainable, affordable and accessible for everyone. We want to create a village that combines private living, flexible working spaces, easy to access amenities, and shared community areas. A place where people can enjoy a social lifestyle and be part of a vibrant community. We want to bring amenities to the residents rather than forcing them to travel in search of them.”

Course leader, Professor Neil Lamb, said: “At a time when we have seen unprecedented change in city living, with some questioning the validity of living in cities in the post pandemic environment, the students set out to see what type of place could be made, learning from best national and international examples that people would want to live, work and play in.

“As humans, we long for meaningful relationships with those around us yet all too often infrastructure and the way we use our cities seems secondary in large re-developments. The new urban village of St.Clements, would re-establish village life at the heart of the city and create a model way of city living for years to come. It would be a place for all demographics; old and young, rich and poor to live in a new settlement that encourages citizenship and a real sense of community.”

The proposals are based on a new site becoming available due to the relocation of the new harbour in Nigg bay. The existing old church of St Clements would become the focus for a new live, work and play community. A place that is based upon new principles of design that suggest the majority of the things that you need including, housing, work, shops, medical support and schools are integrated as part of that community. The concept is based on the idea of a ‘15 minute city’, meaning that everything you should need should be available within 15 minutes of walking.

The urban village would take a lead role in a developing a sustainable future and would encourage people to walk, cycle or use electric powered vehicles or, to use a public transport system, that would be electrically powered from renewable sources.

A shared community heating system would be created to power the new village, tapping into the hot rocks under the city and using local expertise to create this natural, inexpensive geothermal energy. Combined with solar, small scale wind and cutting edge piezoelectric generators, used to capture energy from moving vehicles on roads, this would create a renewable approach that is interlinked and not solely dependent on any one source.

Greenery would be at the heart of the village and people of all ages would be encouraged to enjoy a healthy lifestyle. Security would also be built into the way each housing block overlooks each other in order to encourage a social living space.

The project is being led by visiting professor Bill Black, director of Richard Murphy Architects, Edinburgh and Neil lamb Subject Leader in Architecture and Part 2 Architecture Course Leader at RGU.