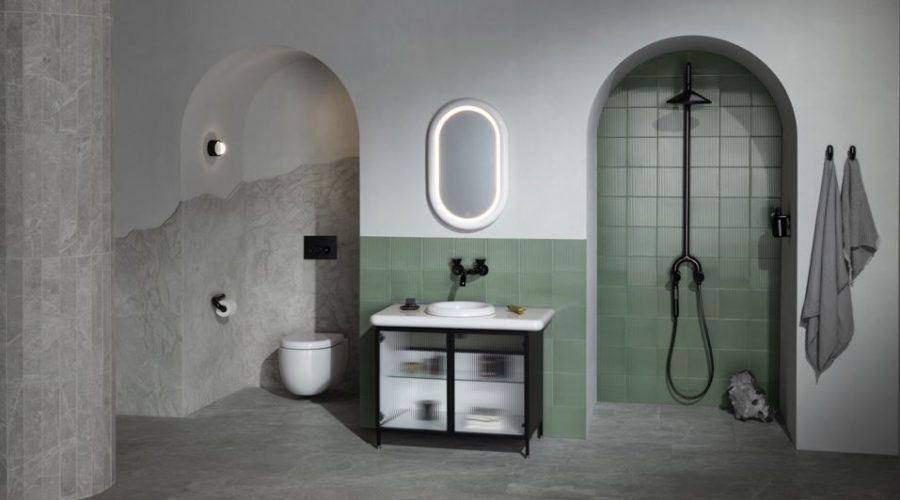 This Autumn, global bathroom brand VitrA introduces Liquid – a new range designed in collaboration with Tom Dixon. Liquid is the first ever bathroom range by the acclaimed British designer.

The range is the latest addition to VitrA’s portfolio of designer collaborations, part of a long-standing programme of working with world-renowned designers to create distinctive, modern bathroom collections to complement any washroom space.

Tom was impressed by VitrA’s extensive experience and highly specialised in-house design team, spending time at the sophisticated manufacturing plant and Innovation Centre at the core of the company’s operation. The collaboration with VitrA has allowed Tom to explore new design opportunities while gaining an appreciation of the complexities of manufacturing products for the bathroom. 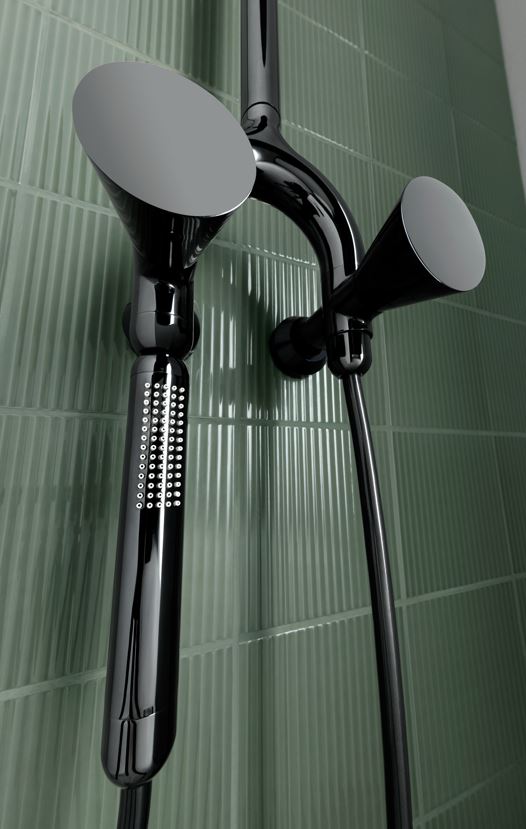 It was important to Tom, from the outset, that he created a fully comprehensive range that would encompass all elements of the bathroom – sanitaryware, furniture, taps, tiles, shower systems, and accessories – designed to work together or as stand-alone pieces.

VitrA and Tom Dixon share a similar vision for creating innovative and original designs that retain their appeal over the years. For Liquid, part of Tom’s inspiration was Victorian bathrooms. “I like the feeling of permanence in Victorian bathrooms, with their big chunky taps and fat tubes,” Tom notes. “It’s an aesthetic that’s closely connected to a whole tradition of British engineering and influenced the development of the bathroom.” The fact that clay is readily available and extremely durable resonated with Tom, particularly from a sustainability perspective. He found it fascinating “the way a bit of grey and greasy earth can transform into something so white, clean and shiny.” Like much of Tom’s recent work, the new collection is aligned with his increasing use of round-edged aesthetics. The designs have been inspired by elements of pop art, such as Jeff Koons and his Balloon Dog and the work of Claes Oldenburg, as well as the sculptor Barbara Hepworth’s geometry of soft forms and use of rounded marble.

Tom and VitrA’s shared vision was to create a complete bathroom solution that is for everyone: “contemporary without being of the moment,” states Tom, while being sufficiently different from other collections on the market. Over months of close collaboration, VitrA and Tom Dixon explored lots of new ideas. “I think design should always increase the potentials,” says VitrA’s Design Director, Erdem Akan. “If you get the core pieces right, you can create combinations and potentials – creating more with less.” The final result is Liquid, a range that is wholly new and yet somehow familiar. 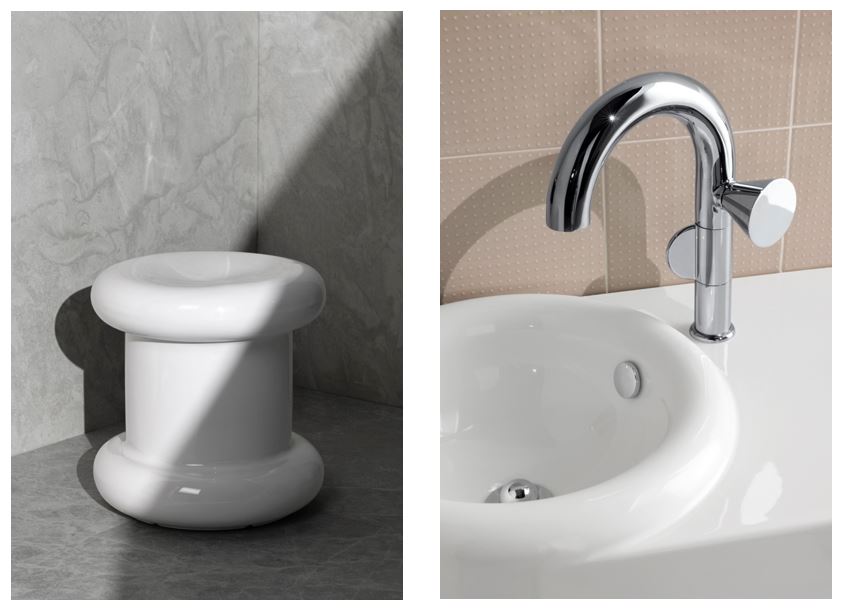 Recognising the current obsession with skinny and reduced designs, Tom has created the opposite, incorporating fatter, softer lines that are inherently more generous, strong, and long-lasting. The smooth, rounded edges are easy to clean, alongside taps with simple controls, while soft edges ensure a safe bathroom environment.

While the overall design is stripped back and reduced, a style Tom refers to as ‘expressive minimalism’, the functionality is intuitive so that users can instinctively understand how to operate the products. “I wanted the collection to look like a kid’s sketch of a bathroom basin or a tap,” says Tom, “displaying a clear logic and simplicity in looks and usage.” 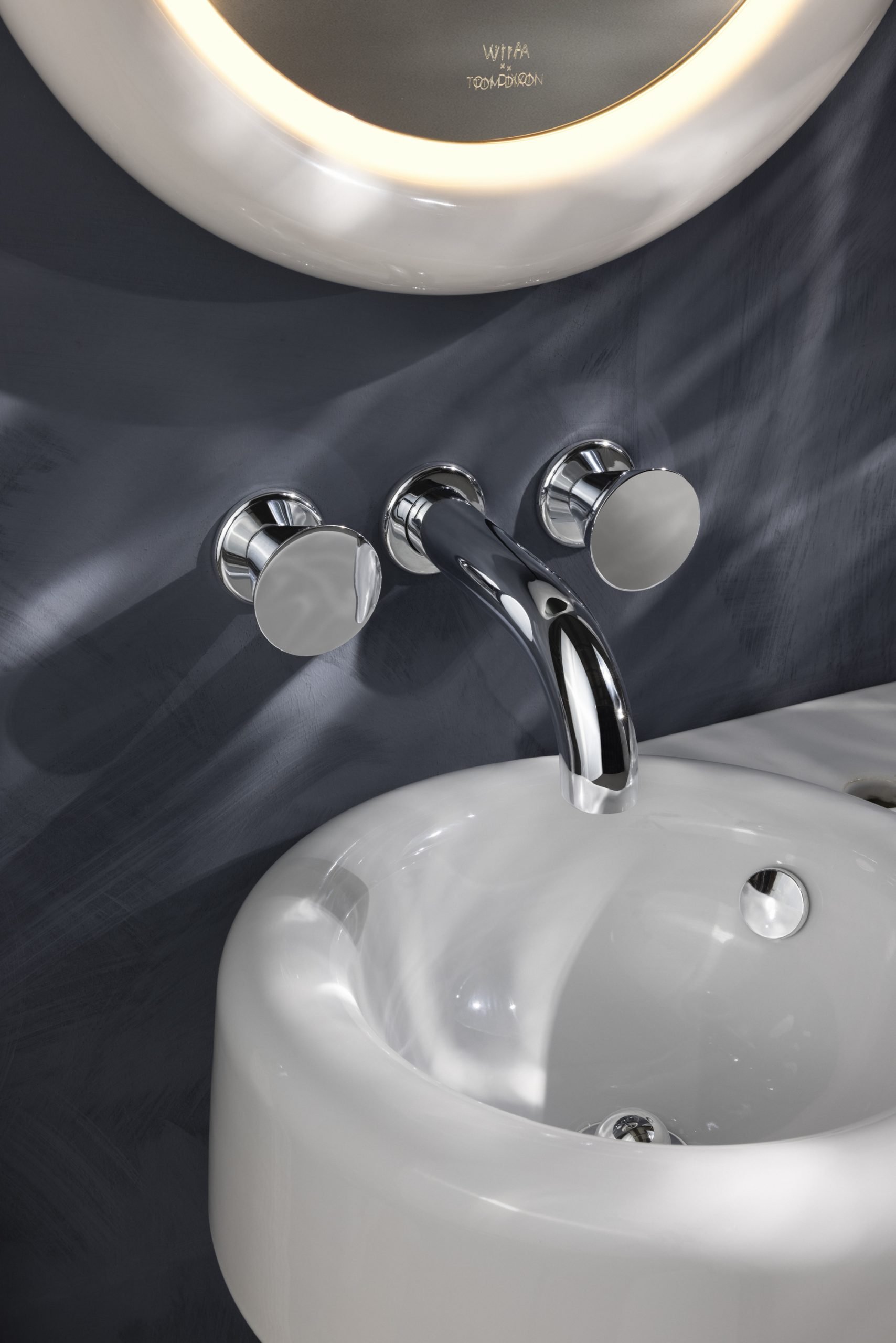 Consciously choosing to offer only white ceramics, the range combines different materials including fluted glass and metal mesh. Taps and showers are available in chrome or for contrast, a new gloss black finish that is atypical in modern bathrooms. The range also includes distinctive wall tiles, available in five designs and with colour options of white, black, grey, sage green and ecru. The tile designs reflect ripples in the water and patterns inspired by the classic U-bend, featuring embossed dots and waves that can be creatively configured.

Each of the products can be combined to create different styles and purposes, such as private and public usage, offering customers the opportunity to personalise the bathroom space by choosing from a wide range of products that includes a urinal, bidet and touch-free tap.  This flexibility means that customers can use the collection in a wide variety of locations from domestic settings in the home to more professional environments such as offices, restaurants and hotels. 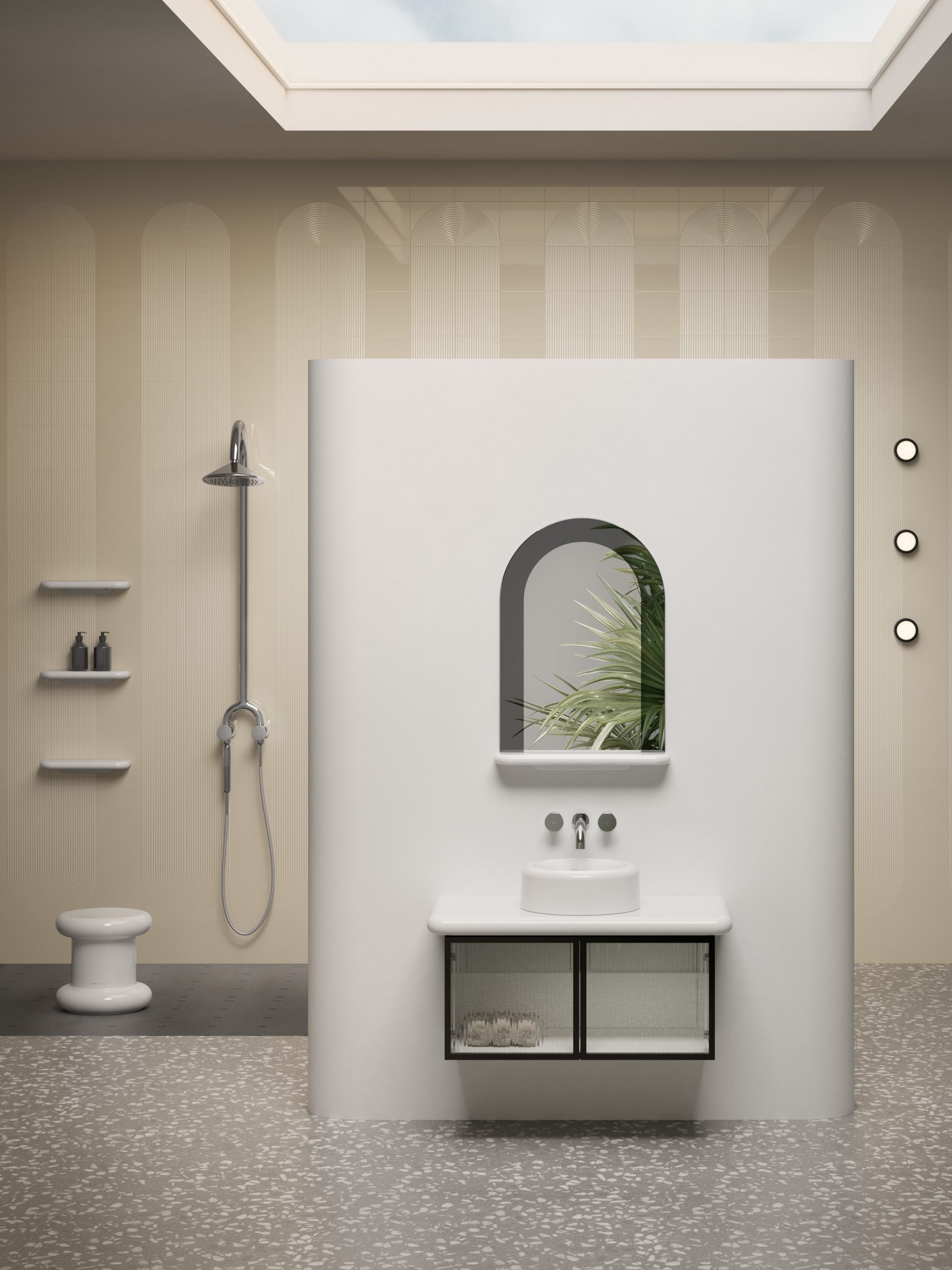 Levent Giray, Managing Director of VitrA UK, comments: “We are delighted to introduce Tom Dixon’s innovative and contemporary collection as part of our ongoing collaboration with world-renowned designers. Our extensive manufacturing, design and innovation capabilities have ensured that there is a unity to the breadth of Liquid, the VitrA x Tom Dixon collection. At a time when there is a greater emphasis placed on the bathroom space, this cohesive collection has a generosity of design that will sit comfortably in both domestic and professional environments.”

Tom Dixon joins designers including Ross Lovegrove, Sebastian Conran, Arik Levy, Terri Pecora and Claudio Bellini, each of whom has collaborated closely with VitrA’s in-house team to create bathrooms that reflect their own vision and aesthetic style.

VitrA is part of the Eczacıbaşı Group, one of Turkey’s most prominent industrial groups. Founded in 1958, VitrA is a leading bathroom manufacturer, which has expanded into international markets in recent years. Over 70 per cent of VitrA’s total output is now being sold outside of Turkey. From 13 production facilities in Turkey, Germany, France, and Russia, VitrA produces a full range of bathroom products, including over 5.6 million pieces of sanitaryware a year and complementary bathroom furniture, brassware, and accessories ranges distributed to over 75 countries on five continents. VitrA UK, based in Oxfordshire, has been supplying the UK bathroom market for over 25 years and is an active member of the Bathroom Manufacturers Association (BMA) and the British Institute of Kitchen, Bedroom & Bathroom Installation (BiKBBI). VitrA has opened a flagship showroom in Clerkenwell, London – VitrA London, a creative hub for architects, designers, and thinkers with dedicated areas for product specification, events, and workshops.

Established in 2002, Tom Dixon is a British luxury design brand which is represented in 90 countries. Specialising in furniture, lighting and accessories, Tom Dixon has hubs in London, Milan, Hong Kong, New York, Tokyo, Hangzhou, Beijing and Shanghai. With an aesthetic that is intrinsically inspired by the brand’s British roots, the products are internationally recognised and appreciated for their pioneering use of materials and techniques.

Founder and eponymous Creative Director Tom Dixon is a restless innovator who rose to prominence in the 1980s as a maverick, untrained designer with a line in welded salvage furniture. While working with the Italian giant Cappellini he designed the widely acclaimed ‘S’ chair. In the late 90s Tom became Creative Director at Habitat and rejuvenated the brand while maintaining Terence Conran’s vision of enriching everyday life through simple, modern design. In 2001, Tom was awarded an OBE by Her Majesty the Queen for his services to British design. In 2014 he was awarded ‘Designer of The Year’ at Maison & Objet, Paris. In 2019, he received a silver medal for Best Garden at the RHS Chelsea Flower Show and in the same year, was awarded the prestigious London Design Medal at the British Land Celebration of Design Awards. Tom is one of the industry’s most feted British designers and is internationally heralded as a significantly original talent.

Launched in 2007, Design Research Studio, the design and innovations agency at the heart of Tom Dixon, continue to create extraordinary spaces globally. Recent projects have included reimagining the modern cruise experience for Virgin Voyages on their first ship, reinventing the layout and interior of The Pullman Hotel in Bercy, the iconic Drugstore Brasserie on Les Champs-Elysees, Paris and designing the Manzoni in Milan, Tom Dixon’s first European hub which acts as a restaurant, shop and office all in one. In 2018, the brand relocated its headquarters – Coal Office – to London’s King’s Cross, which was a significant step for the business. Coal Office operates as an office, shop, workshop and restaurant all under one roof and is located in the affluent shopping destination, Coal Drops Yard.

Best-selling products such as Beat, Melt, S-Chair and Wingback are instantly recognisable and have been acquired by the world’s most famous museums including the Victoria & Albert Museum, London; MOMA, New York; and the Centre Pompidou, Paris. Latest additions to the brand’s range, such as the Fat chair, Spring lights and Swirl accessories are quickly gaining momentum and reiterate Tom’s status and significance in the design world.