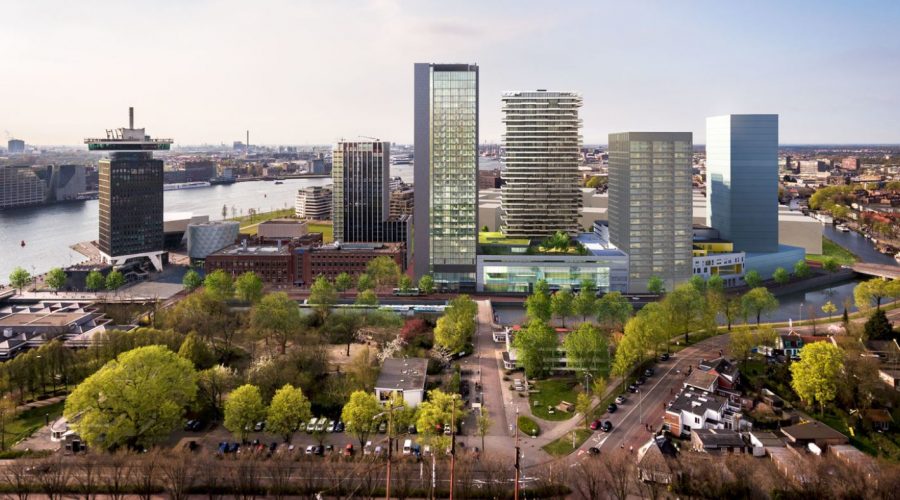 Sherwin-Williams’ award-winning FIRETEX® FX6002 was chosen as part of an intumescent coating system for maximum fire protection of a major residential and hotel development in northern Amsterdam.

Y-Towers, under construction in the Overhoeks district of the Dutch capital, will consist of two towers reaching over 100 metres, becoming the tallest building in northern Amsterdam when the project is completed in 2023.

The tallest tower will host the Maritim Hotel Amsterdam, including 579 rooms, along with a Skybar, conference centre and events space, while the second tower will house almost 300 residential apartments.

Winner of a 2021 Queen’s Award for Enterprise: Innovation, FIRETEX FX6002 can be applied off-site, enabling paint applicators to transport steelwork in a matter of hours rather than days – which means less downtime, fewer bottlenecks and faster project completion. FX6002 makes it possible for steel sections to be coated and shipped in one day as opposed to one week in the same circumstances.

FIRETEX FX6002 can be applied direct to metal without the need for a primer or topcoat in some environments, whilst retaining the highest levels of durability – with up to 120 minutes fire protection and long-term corrosion protection to the steelwork.

Alessio Ortolan, General Manager of Maeg Costruzioni SpA, the steel fabricator for the construction, said: “For the Y Towers project, a just-in-time delivery method requires beams to be delivered after they are coated off-site. This will help to reduce the exposure, backlog and time delays associated with application on-site.

“Through our partnership with Sherwin-Williams, the FX6002 system can be fully applied at the paint shop and moved on site and installed within one day, enabling the construction to move at a quicker pace with fewer bottlenecks. As a result, the quick curing of FX6002 should lead to less damage to the steel when moved, as we know beams will be fully cured when lifted on-site.”

The ultra-fast drying times and off-site application help reduce damage and minimize project costs and delays without forcing architects or owners to compromise on design.

“We are proud to have been involved to ensure the highest level of fire protection measures are in place where the lives of people and safety of property are at stake.”

Projects using fire protection coatings delivered by Sherwin-Williams in EMEAI include London’s The Shard and the Leadenhall Building (known as The Cheesegrater), as well as Azerbaijan’s Flame Towers.

FIRETEX FX6002 is also being used an intumescent coating of choice on steel buildings throughout Europe. It can be used on a diverse range of steel section types and for different fire protection scenarios as opposed to other options.

For more information on the Sherwin-Williams FIRETEX range, visit: https://pages.s-w.com/

The Sherwin-Williams Protective & Marine EMEAI team is based in Bolton, Greater Manchester, from where it develops and manufactures industry-leading products. These include FIRETEX FX6002, the first intumescent coating to dry in one hour, and the award-winning Dura-Plate 301W, the only primer which combines surface, temperature and humidity tolerance in one product.

The Protective & Marine Division is part of the Sherwin-Williams Performance Coatings Group, which supplies a broad range of highly engineered solutions for construction, industrial, packaging and transportation markets in more than 120 countries in the world. Founded in 1866, The Sherwin-Williams Company is a global leader in the manufacture, development, distribution and sale of paints, coatings, and related products to professional, industrial, commercial and retail customers. For more information on the company, visit http://protective.sherwin-williams.com.