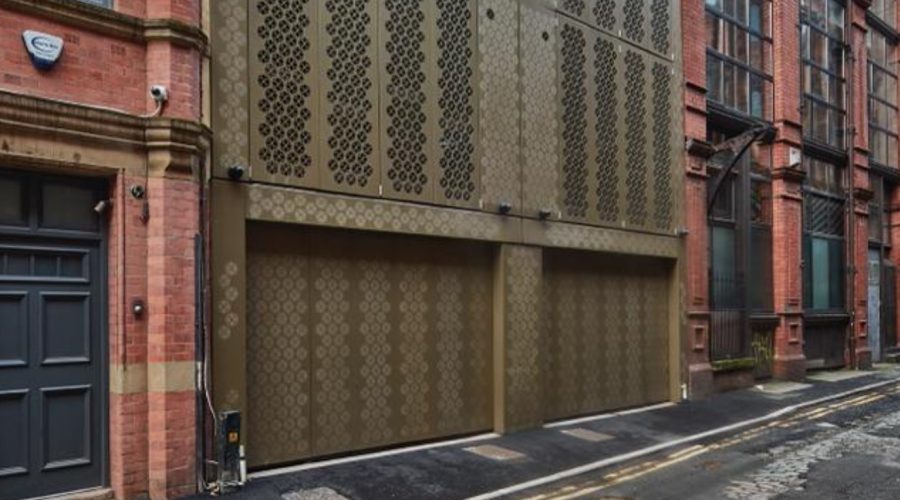 A bronze façade featuring bespoke Rundum Meir garage doors for two new townhouses in central Manchester has been uniquely designed to reflect the architecture of the nearby John Rylands Library, one of the city’s most famous neo-Gothic buildings.

The duo of four storey, high specification private dwellings designed by Snook Architects for regeneration specialist Watch This Space have given new purpose to an unused site nestling between two post-industrial buildings close to Deansgate.

Their full height bronze façade delivers a striking external appearance that takes a distinctive visual cue from the library opposite.

The aluminium façade of both townhouses features laser cut and acid-etched lacy blind tracery patterns that match those in the windows of the library, a late Victorian neo-Gothic building which opened in 1900 and is now part of the University of Manchester.

The lacy pattern is used over the height of the façade, including the large folding/sliding shutters which balance privacy with natural light requirements for residents during the day, whilst being eye-catching at night as internal light shines through the laser cut pattern.

This design also extends into the twin side sliding sectional garage doors manufactured and installed by Rundum Meir, which effectively deliver a sliding façade at street level.

Working closely with Snook Architects, Rundum Meir’s designers were able to replicate the design with total consistency and manufacture in Germany using acid etching across the six aluminium sections.

Find out more at www.rundum.co.uk